After the massive success of the 16 and Pregnant spinoff Teen Mom, Teen Mom 2 was not far behind and now audiences have been following the lives of Teen Mom 2‘s stars since January 11, 2011. Over the past eight years a lot has changed in the lives of Leah Messer, Jenelle Evans, Kailyn Lowry and Chelsea Houska. Many have gotten married, expanded their families, and now there is even a new cast member with Briana DeJesus. As season nine seems to be stirring up old drama, and of course adding a bunch of new storylines, here is everything to expect from season 9 of Teen Mom 2:

In the second half of season eight of Teen Mom 2, fans saw Kailyn and Jo battle it out for custody of their son Isaac in court yet again. While it seemed like everything was settled by the end of the season, it looks like that won’t be the case when season nine picks back up. In mid-November 2018, Kailyn spoke out about more drama between the two on her podcast and again on Twitter after Jo apparently filed for child support. “I’m shocked not because he filed for child support because if he needs it, he needs it. I’m shocked in the way that he did it. He did it so sneaky…I feel like he was kind of plotting to do it behind my back…He was always the one preaching to me about talking things out before going to court,” she said on her podcast.

It has been a long time since the subject of Jenelle Evans’ first son’s father has come up, but it looks like it will be a plot point in season nine. Earlier in the year reports surfaced that Andrew had spoken out about wanting to see his son more, and the trailer for the upcoming season seems to confirm just that. In the trailer, a clip is shown from Jenelle’s 16 and Pregnant episode after Jace is born and his father Andrew holds him, with a voiceover from Jenelle’s mother Barbara saying, “Where is Andrew now?” According to The Ashley, producers had to dig Andrew up from Jenelle’s past because of filming restrictions around not being able to film her husband David, and other aspects of her life that Jenelle refused to film. “They were desperate because at the time they literally had no one to film Jenelle with. She wasn’t speaking to any of her family, they couldn’t film David and she has no friends around to film with. They had to come up with something,” a source said of why Andrew is a big part of her storyline for the upcoming season. Meanwhile The Ashley goes on to say that Andrew didn’t reach out to them as Jenelle’s producers states in the trailer, but rather they contacted him for the storyline specifically.

MTV’s filming of Chelsea’s ex and Aubree’s father Adam has been a wild ride, but Adam hasn’t been seen for quite some time after multiple serious run-ins with the law and a worsening problem with drug abuse. While even the mention of Adam has lessened as focus has turned to Chelsea’s growing family with husband Cole, it looks like her problems with Adam will become a bigger part of her storyline again. In the trailer Aubree can be seen saying to her mom, “So the whole visitation is just canceled?” and Chelsea says, “I don’t have any words.” It isn’t likely that Adam will actually appear on the season but as Aubree gets older it seems her complicated relationship with her dad will be explored further.

Fans were undecided about Teen Mom 3‘s Briana DeJesus joining Teen Mom 2 but there is no denying that she has definitely brought the drama. After dating Kailyn Lowry’s ex-husband Javi Marroquin, it seems she has found love yet again which will be the main focus of her season nine storyline. While Briana has been posting about her new love on social media, she has been hesitant to share his name, although things do seem to be pretty serious.

Although producers had a hard time coming up with new angles and storylines for some of the stars for season nine, that didn’t stop MTV from extending the season. According to reports Teen Mom 2 has much better ratings than Teen Mom OG, and before the January premiere date MTV decided to extend the season by an additional six more episodes with an option to add even more. “For most of the girls, there is so much happening that it would have been impossible to wrap up the stories in just [the original] 12 episodes,” a source told The Ashley about the decision to make the season longer than first anticipated.

Ever since Leah’s episode of 16 and Pregnant, fans have followed the health journey of one of her twin daughters, Ali who was diagnosed with an incredibly rare form of muscular dystrophy. From when she was very young, Ali’s doctors have said that her condition will worsen as she gets older, and the past season saw Leah and Cory staying strong for their daughter despite the struggles. As always, Leah’s storyline will definitely keep fans up to date as Ali has more trips to the doctors and her family learns more about her disease.

The previous season of Teen Mom 2 ended with some serious drama after a physical confrontation broke out between Kailyn, Briana and Briana’s sister Brittany at the reunion show. The reunion was very tense because of the fight and there is no doubt that it will be something that is revisited in season nine. While it was an explosive ending to season eight, things will definitely be different in season nine as Kailyn and Briana actually don’t have to see each other until the reunion, and Kailyn might be less defensive now that Briana has officially moved on from Javi.

The trailer for season nine teased that the past was going to be a major focus for some Teen Mom 2 stars, and in a surprising move, it seems that Kailyn will want to reach out to her estranged mother again. Kailyn hasn’t been in contact with her mother Suzi for years, and in the trailer Kailyn admits she is sad that her kids won’t really know her side of the family because she has no contact with either her mother or her father. While it will be interesting to see if she actually interacts with her mother again, it seems that the whole storyline was just to have something on Kailyn that wasn’t related to any drama with her three exes. “Again, that whole plotline was just [MTV] trying to come up with something to film Kail about that didn’t have to do with one of her exes,” a source said.

Season nine of Teen Mom 2 hasn’t even begun to air yet and it seems there is already drama stirring for when the whole cast comes together for the reunion later in the year! In early January, before season nine’s premiere, The Ashley tweeted out a story that MTV crew members were refusing to work on Jenelle Evans’ segments because they are afraid of her husband, David Eason, who has threatened to shoot trespassers and has also made it clear he does not like MTV. After The Ashley posted the story on Twitter, Kailyn responded with, “I will not be attending any type of reunion on the same day or weekend as Jenelle & David for the same reasons.” Of course fans will remember that Jenelle refused to fly in for the last reunion causing Dr. Drew to have to fly out to Wilmington for her reunion segment and will most likely be the case again if everyone feels unsafe around Jenelle and her husband.

While there has been a lot of focus on Kailyn’s drama with her three exes when it comes to her storylines, things have been going very well professionally for her and it seems that might be explored in the upcoming season. After launching her podcast Coffee & Convos last year, this season will most likely see Kailyn’s development of her newest business venture, Pot Head Hair Care, which is a line of hair products infused with CBD oil. There has also been quite a bit of drama surrounding the release of Kailyn’s latest book with many customers not getting their book and an ongoing issue with the publisher, but for legal reasons that may not be discussed in the upcoming season.

Of course, season nine will have to feature the major drama that swirled around Jenelle and her husband David in late 2018. The trailer for the season features Jenelle’s 911 call in which she claimed that David had slammed her to the ground and she thought her collarbone was broken. The entire incident happened after both David and Jenelle had been drinking while having friends over for a bonfire while their kids slept inside the house. Although MTV was not filming at the time, Jenelle went on to deny that she was assaulted by David and said she merely tripped by the fire. Along with the 911 call, there will most likely be a deeper look at Jenelle and David’s relationship, as many seem to be very troubled by it.

It has been quite some time since Leah has opened herself up to love after admitting she has had a few random hookups with ex-husband Jeremy Calvert, but it seems things are so serious with her new man that she is ready to introduce him to the cameras. At the season eight reunion, Leah revealed she had been “talking to” a guy who she seemed to like, and by the summer it was confirmed she was dating Jason Jordan. Although the two briefly split in the fall, they reconciled in time for the holidays and Leah made their relationship social media official with several posts. 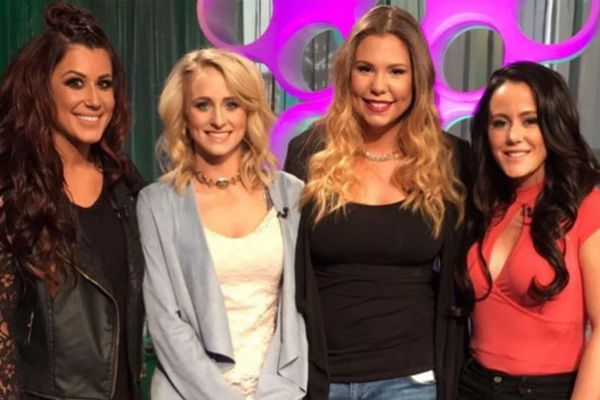