It seems Hayden Panettiere was born to be in the spotlight after starting her career at 11 months old. Over the years she has grown up in front of the camera and has tackled many genres from TV soap-operas to lifetime movies to romantic comedies and of course hit series such as Heroes and Nashville. Despite her lifelong fame, she has remained grounded and has a large legion of loyal fans all around the world thanks to her infectious personality and talent. Check out 10 things you never knew about the New York native!

Hayden Panettiere has a tattoo down her left side, but unfortunately it wasn’t done correctly. The tattoo is supposed to say “Live without regrets” in Italian but is misspelled. Panettiere once spoke out about the tattoo, saying, “So my tattoo means ‘Live without regrets.’ It’s not that you don’t regret things in life, but you at least try to learn from them. It’s misspelled too, so I literally have to live by that advice!”

Hayden Leslie Panettiere was born on August 21, 1989 in Palisades, New York. Her parents are Lesley R. Vogel, a former soap opera actress, and Alan Lee ‘Skip’ Panettiere, a fire captain. Panettiere attended South Orangetown Middle School, but was then home-schooled from grade nine until she completed high school. Although she was home-schooled, she didn’t miss out on anything. “I was home-schooled, but I didn’t miss out because I grew up around the kids who went to middle school and elementary school with me. I still went to prom, and I still went to homecoming. We also had a place called the fort, which was an amazing place where all of our friends could meet. It was in the middle of the woods and on a cliff overlooking the Hudson River. My friends dug out campfires and we had torches — it was an unbelievable time,” she said of growing up.

For the 2005 film Racing Stripes, Panettiere had the opportunity to ride a zebra, and as such is one of the only people in the world who has ridden a zebra. Unfortunately while filming in South Africa, she was bucked off a zebra and had to be taken to the hospital where she suffered from a concussion, whiplash and two compressed vertebrae in her neck.

Aside from her high-profile acting work, Panettiere is a well-known animal rights activist. In 2007 she joined The Whaleman Foundation in order to protest dolphin hunting in Taiji, Wakayama, Japan. The star along with other protestors became involved in a confrontation with Japanese fishermen and parts of the incident were included in the award-winning documentary The Cove. As a result of her efforts to expose and stop the slaughter of dolphins, Panettiere became the second-ever recipient of The Wyler Award which honors a celebrity who has raised awareness about animal issues.

With a mother who was already involved in the industry, it didn’t take long for Panettiere’s career to start; in fact she was only 11 months old when she began appearing in commercials. Over the years she has appeared in over 50 commercials, but her acting break came when she landed a role on One Life to Live from 1994-1997, and then on Guiding Light from 1996-2000. She is also known for offering her voice for the role of Dot in A Bug’s Life, but she became most widely known after landing the starring role of Claire Bennet on the hit NBC series Heroes.

While it is good that Panettiere’s social life didn’t suffer because she was home-schooled, it turns out her and her friends had a bit too much fun sometimes. “We were grouping in a place where we weren’t supposed to be,” she explained of one night where she ended up running from the cops. “We’d chosen this party spot because no parents were going out of town that weekend. Some of the older kids thought it would be funny to light firecrackers just as the cops drove by, so we got chased. I don’t really know why I was running, but it was funny. I got a kick out of it. Unfortunately, three of my friends got grabbed. Oops.”

With an entire lifetime of commercial, modeling and acting world under her belt, it shouldn’t be surprising that Hayden Panettiere is worth quite  a bit of money. At only 27 years old, she already has a net worth of $15 million. For her starring role on the hit series Nashville, the actress is reportedly making $75,000 per episode.

Panettiere’s love life was thrust into the spotlight after she began dating her Heroes co-star Milo Ventimiglia. The pair dated from December 2007 to February 2009 before calling it quits, but it wasn’t much later when she met her now-fiance Wladimir Klitschko. The pair met at the launch of a coffee-table book of a mutual friend, and neither had any idea who the other was. The two began dating soon after and had their first date at the Magic Castle in L.A. After two years together, she announced they had amicably split, but by April 2013 they confirmed they were back together and by October they were engaged! In December 2014, Panettiere gave birth to the couple’s first child, Kaya Evdokia Klitschko, in Hawaii.

Hayden Panettiere has made headlines many times since welcoming her baby girl Kaya as she has opened up about her battle with postpartum depression. The actress revealed in October 2015 that she was “voluntarily seeking professional help at a treatment center” to battle the postpartum depression. Upon opening up about her own battle, Panettiere is trying to help de-stigmatize ideas about the mental illness. “There’s a lot of misunderstanding — there’s a lot of people out there that think that it’s not real, that it’s not true, that it’s something that’s made up in their minds, that ‘Oh, it’s hormones.’ They brush it off. It’s something that’s completely uncontrollable. It’s really painful and it’s really scary and women need a lot of support.” In May 2016, she once again revealed she was seeking help. “The postpartum depression I have been experiencing has impacted every aspect of my life,” she wrote on Twitter. “Rather than stay stuck due to unhealthy coping mechanisms I have chosen to take time to reflect holistically on my health and life. Wish me luck!”

Although she is close to her parents, things got a bit ugly for the family when her parents Alan and Lesley decided to divorce in 2008. The divorce got nasty pretty quickly, and when things were finally settled, the divorce had to include terms in which they would have to payback their daughter. As it turns out, Panettiere had loaned her parents quite a bit of money including $100,000 to her father, and let her mother crash in her condo for some time. Alan was forced to pay his ex-wife $5,000 a month in spousal support and agreed to repay all of the money Hayden had lent him and Lesley all on his own. 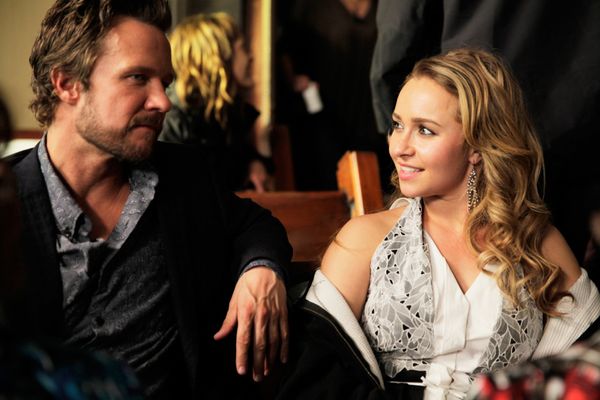