James Kimmel, more commonly known as Jimmy Kimmel, is one of the most well-recognized faces on television because of his widely popular late-night talk show, Jimmy Kimmel Live! The ABC host, producer, writer and comedian has been cracking jokes and interviewing celebrities since 2003 when the show was first introduced and since then he’s been on a steady climb to success. He’s hosted the Primetime Emmy Awards not once, but twice, done cameos in numerous films and was honored with a star on the Hollywood Walk of Fame! He’s turning 50 soon, so we’ve compiled a list of 10 things you probably didn’t know about the hilarious host, Jimmy Kimmel!

If Jimmy Kimmel didn’t go into radio after high school, he would have been an artist! In an interview with Entertainment Weekly, he said he always figured he would be an artist growing up, but when he started watching late night television while drawing, he fell in love with late-night hosts like Johnny Carson and David Letterman. “I always gravitated towards drawing funny things. Maybe I would have done political cartoons or something. I did do a little of that when I was a kid because I’d see them. I’d draw the presidents but I was never great at it…I always thought I’d be an artist, but I started watching late-night television while I was drawing. I’d watch Johnny [Carson] and then Dave [Letterman] and then NBC News Overnight and Bob Costas,” said Kimmel.

Sketch of the day

9. Bought His Parents a House

Jimmy Kimmel is an extremely generous man, especially now that he’s got lots of fortune to share. In an interview with his parents, his father told a story about how his son bought them a house near the beach. “[In 2006], we’re in Hermosa Beach. We’re supposed to go for dinner with the family but he tells us that we’re going to go over to some park first and my great-nephew is going to play t-ball…My nephew Sal was there with his family and he said, ‘Aw, it got called off, the weather was windy.’ Jimmy said, ‘What are we going to do? We’ve got a couple of hours to kill before dinner at eight o’clock.’ So, he turned around and there were these townhouses and an open house sign…While we’re upstairs, we happened to look at the fireplace and over the fireplace was a picture of Joan and I in Italy. We looked at each other and he looked at us and then we started crying,” Jimmy’s father said. Kimmel said he bought them the house because when he was a kid there was a memory that stuck with him of his parents stating they wanted a house near the beach. So when he could afford to give that to them, he did. How sweet! 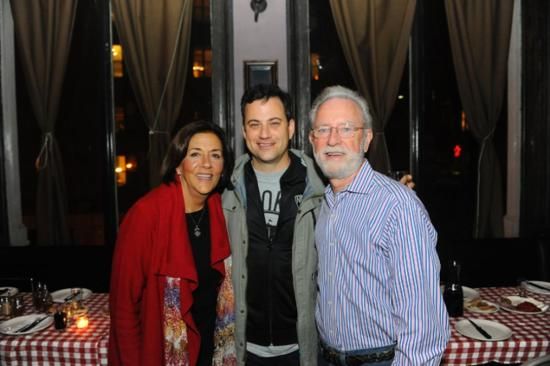 In an interview with Rolling Stone, Kimmel said he’s “always been attracted to funny women,” and his dating history is proof of that! Prior to marrying Molly McNearney, the co-head writer at Jimmy Kimmel Live!, Kimmel had a long-term relationship with fellow comedian, Sarah Silverman. They started dating in 2002 not long after he divorced his first wife, Gina Maddy, who he shares two children with, Kevin and Katherine. Kimmel and Silverman dated for five years but broke up in July 2008. They briefly rekindled their romance when they both attended Howard Sterns wedding to Beth Ostrosky but were broken up again by March 2009. The two of them have managed to remain close friends and he even brought her on his show as a guest in 2014. In October 2009, he started dating another woman with a good sense of humor, Molly McNearney. They were engaged in 2012, married in 2013 and now share one child together, a daughter named Jane. 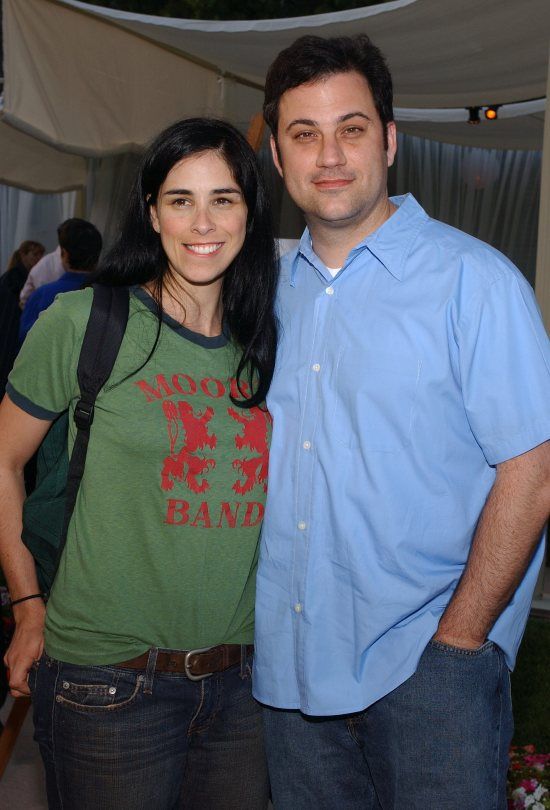 7. He Can Play the Bass Clarinet

Not only is Jimmy Kimmel really good at being a hilarious comedian up on stage, he’s also a bit of a musician! He started playing the bass clarinet as a kid in middle and high school and he can still play pretty well today! He’s actually gone up on stage with the band, The Mighty Mighty Bosstones, and played their hit song “The Impression That I Get” on more than one occasion. There’s even proof in a clip up on YouTube from one instance at the House of Blues in Los Angeles! He’s also showcased his skills on the Jimmy Kimmel Live! show more than once.

In an interview with The Hollywood Reporter, he talked about his love for food and cooking. “I love cooking, I like talking about cooking, I love chefs and a lot of my friends are chefs, and I just like that kind of culture and lifestyle.” Food is definitely a big part of his life and his interest comes in handy when it comes to running the household with his wife and their daughter: “My wife and I each have our specialty areas in the kitchen; she usually makes a salad and dessert, and I’ll cook everything in the middle. I have a wood-fired pizza oven in my backyard, so I’ll make pizzas. I make the dough and oftentimes made the mozzarella out of curd. I’ll make fresh pasta and roll it out and everything. But my real specialty is having nothing in the house and scratching something together. That’s when I really shine,” he said. He even went on to say that he likes doing laundry and vacuuming too! Sounds like Kimmel is the whole package!

After graduating from Arizona State University with a degree in broadcast, he landed a series of radio jobs, but was subsequently fired from them all! It started with a radio job in Phoenix which he was fired from, then he moved to Seattle, then Tampa, but he was laid off from those as well. Finally, he was hired in Palm Springs, then moved to Tucson and was fired after working there for less than a year. “They’d tell me they wanted me to be edgy, but they didn’t actually want to get phone calls from people complaining, and from sponsors cancelling,” said Kimmel. According to him, he would constantly be mouthing off on air and to his bosses, making rude remarks and would parody songs by insulting public figures. He could draw an audience, but he always left them feeling angry. The only job that stuck after a series of firings was a position doing sports roundup on Los Angeles behemoth KROQ, which later lead to his TV gig on Comedy Central co-hosting Win Ben Stein’s Money. 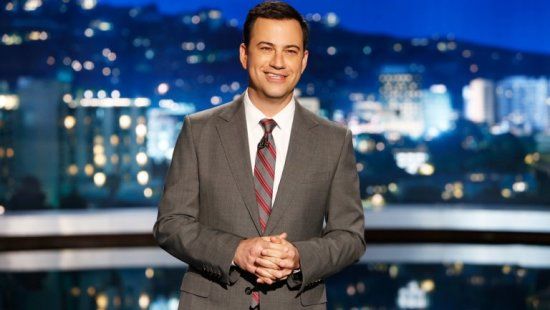 Kimmel was raised in an extremely Catholic household and still sees himself as extremely religious today. In an interview with Rolling Stone magazine, he said, “I don’t understand atheism., I don’t know how anyone could be sure there isn’t a God.” When he was a little kid he was an altar boy at their family church and, in a hilarious skit with George Clooney, the two of them reminisce about the past when they were altar boys. “I was pretty good, although I would sometimes fall asleep during mass and I would yawn, and I have a huge mouth, and I of course didn’t cover it and my parents would go nuts,” said Kimmel.

Kimmel’s wife once said in an interview that she’s never met a man who is so feminine and so masculine at the same time. Kimmel loves to do things that the stereotypical man wouldn’t like, such as cooking, cleaning, crafting little gifts and even shoe shopping! He told Glamour magazine in an interview that he is very proud of the fact that he can successfully shop for shoes and handbags for his wife: “I’ve never been good at buying clothing for the women in my life, but somehow over the last few years, I’ve figured out shoes. And it delights me to no end when I find shoes that I think my daughter and wife will like, and they actually do! I recently sent my wife an email with a link to a purse to see if she thought it was cool. So these are the things we discuss. To be honest, it drives her crazy, but I can’t help myself,” he said. 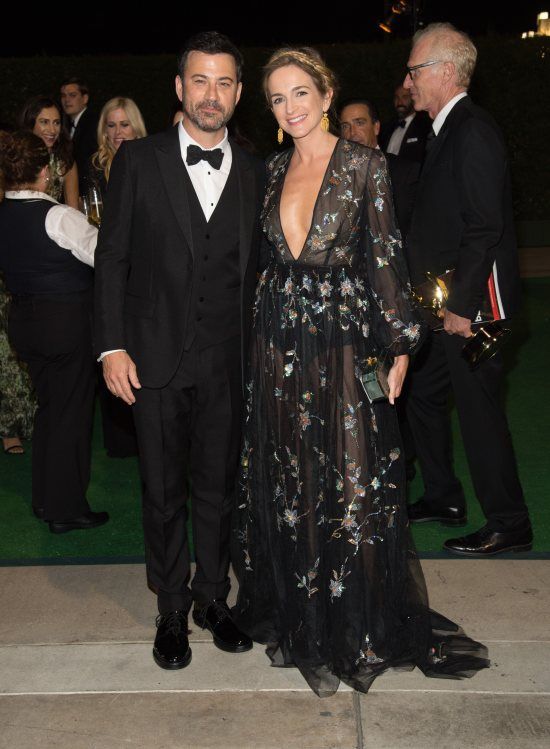 The TV host and comedian has been pretty open about his narcolepsy diagnosis. He even penned an essay for the August 2003 issue of Esquire titled, “What It Feels Like To Have Narcolepsy,” where he joked that it was the best thing to ever happen to him! “Truth be told, I’d rather have narcolepsy than not have it. When I get on a flight to Vegas, I’ll fall asleep before the plane takes off and wake up after it’s landed. I’m always very close to sleep,” he wrote. He also added that his case is extremely mild: “I have a pretty mild case with no other symptoms. Some narcoleptics experience cataplexy, which is a limpness in the arms and legs. I don’t have that. I’d like to though. It sounds great.” 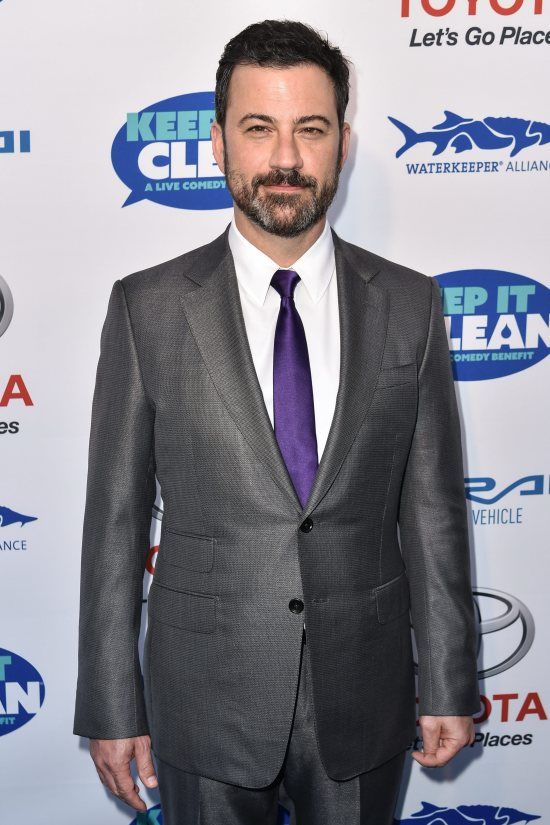 Jimmy Kimmel lost a lot of weight in 2010 after he bought a scale and started keeping track of his weight. The way he lost weight was rather strange. He calls it the 5:2 diet because he’ll eat fewer than 500 calories a day from Monday through Thursday, but then eat anything he wants the rest of the week. Kimmel refuses to exercise — in fact, he absolutely hates it! “The idea that you would not only exercise, but that you would enjoy it is very difficult for me to understand. I just hate it….I do have a treadmill desk in my office, and for a while I would walk on it while checking email and going through jokes. I haven’t walked on it in probably four months. Now it’s more of an upright dining table for me,” said Kimmel. 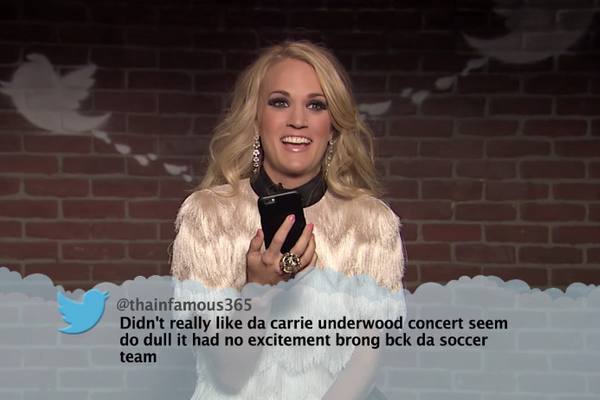