Julianna Margulies is a well known actress who is best recognized for the two biggest roles of her career, first as nurse Carol Hathaway on ER and more recently starring on The Good Wife as Alicia Florrick. The Good Wife recently came to an end in 2016 after an impressive seven season run and the show was incredibly successful with a loyal following of fans right until the end. It was smart, witty and the cast was completely convincing, especially Julianna Margulies. She’s a well credited actress who is also critically acclaimed. Julianna has been dubbed by TIME magazine as one of the “100 Most Influential People in the World,” and we understand why! This incredibly beautiful actress has been gracing our television screens since the early ’90s and she’s won our hearts over with ability to fulfill and support roles of strong female empowerment. In honor of her birthday, here’s 10 things you didn’t know about Julianna Margulies:

She was born in 1966 in Spring Valley, New York, to her parents Fancesca and Paul Margulies. Julianna is the youngest of three daughters. When she was only 2-years-old her parents relocated to Paris, France, and then again to England when she was 4-years-old. Her mother was a former dance instructor and physical therapist, while her father was a writer, philosopher and Madison Avenue advertising executive. At the age of 14, she moved back to America to attend boarding school in New Hampshire. Later she began studying history at Sarah Lawrence College, and it was her participation in the school’s theater productions that sparked her interest in acting. Once she graduated she headed for New York City to pursue her dream of becoming an actress and worked as a waitress, coat check girl and bartender in the mean time to pay the bills.

She was the only ER cast member to win an Emmy. In fact, she was nominated for an Emmy every year she was on the cast as a regular. Her character was supposed to be killed off in the pilot, but she was so well received by viewers that producers kept her on the show! She recalls getting a phone call from George Clooney and he said, “I think you’re going to live!” Her character on the show had a fling with Clooney character — lucky girl! Julianna turned heads when she left the show and her $27 million paycheck. In 2012 she broke her silence on the decision and said, “I’m a smart girl. I had a year’s worth of work waiting and a mortgage completely paid at age 32. I was under no illusion that I was going to be some big movie star. My dad said, ‘If you got hit by a bus tomorrow, were you living your life truthfully, or were you waiting to get rich?’ If I died and my soul started leaving my body, would I be looking down going, ‘You idiot. You could have gone to Prague, you could have been on Broadway? Those are the things I wanted to do.” In 2006 she made her Broadway debut in Festen.

Julianna has now portrayed a lawyer on television twice — first in Canterbury’s Law and then as the famed Alicia Florrick on The Good Wife. She’s gotten quite good at pulling off the persona, but in reality she’s just playing a part whereas her husband is the real deal. We’re pretty sure Julianna gets a lot of tips from him because he’s a Harvard Law-educated attorney! Before Julianna met Keith Lieberthal, who is six years her junior, she wasn’t sure she wanted to get married. The two met at a dinner party and married in 2007. She’s very candid about her relationship with her husband and told Good Housekeeping, “I married a rock, who understands what I do without any resentment. And I’ve got a joyful, easy kid.”

Margulies won a SAG and Golden Globe for her portrayal of Alicia Florrick and two Emmy’s in 2011 and 2014, respectively. Her role as Hathaway also earned her an Emmy back in 1995. At one point Julianna set a record when she had accumulated eight Actors Screen Guild Awards, but in 2012 she tied up with Alec Baldwin.

6. She Purposely Married Late in Life

Julianna didn’t get married until later in life when she was 41-years-old. She said this was a conscious effort because she grew up in a family torn by divorce and she didn’t want to raise a child in that kind of environment. In an interview with Redbook she said, “I didn’t get married until later for a very specific reason: My parents were divorced and I never wanted to put a kid through that. I definitely met the right person, but I also think part of it is timing. I wouldn’t have been ready for the life I have now when I was 30. It’s easy to have the chocolate and poems in your life, the whirlwind romance. The hard part of life is being the person who shows up for the parent-teacher conference.” In fact, she almost blew off Keith when they first met because ironically she thought he was an actor! In an interview with Good Housekeeping she said, “I said to him, ‘Listen, I’m going to be leaving in 10 minutes because I’m sure you’re an actor and I have sworn off [your type].’ And he said, ‘Well, that’s good. I’m a lawyer.”

When Keith and Julianna got married she was seven months pregnant. Their son was born in 2008 and they named him Kieran Lindsay Lieberthal. In an interview she said, “Being a mother has made me more patient and more hyper-aware. I wasn’t someone who enjoyed being around lots of little kids before I had my son. But now I see the world through their eyes. I got some interesting offers to work during The Good Wife’s hiatus, but I wanted to spend the time with my family. Right now it’s about wanting to see my child every day and being 100-percent present when I’m with my family.”

4. Her Apartment was Featured in a Magazine

Julianna and Keith’s New York apartment is extremely chic and sleek, so much so that it was featured in the February 2014 issue of Architectural Digest! She owned the apartment for 10 years and then finally renovated it to look more modern. She said, “I bought it thinking I’d flip it. There’s just this sense of calm here. I didn’t realize what a smart buy it was.” However, shortly after the article came out, she went away on a skiing trip. When they got home, she walked in the door with the magazine in hand and her entire apartment had flooded! “We walked into our brand-new apartment with this [magazine] – it was in the mail – and everything was flooded. The whole place had completely flooded from the guy upstairs.”

Julianna Margulies might be the famous A-list actress in her family, but her father is also famous in his own right! Her dad, Paul, wrote the popular Alka-Seltzer jingle, “Plop, plop, fizz, fizz, oh what a relief it is.” He was also known for his writing; he most recently wrote the children’s book “Three Magic Balloons.” He passed away in 2014 at the age of 79.

2. Her Relationship with Archie Panjabi

Fans of The Good Wife will know there’s been a lot of speculation around what happened between Julianna Margulies and Archie Panjabi, who played the character of Kalinda Sharma. Many people believe these two did not get along behind-the-scenes and it eventually impacted the storyline of the show. Julianna and Archie hadn’t appeared on screen together for more than 50 episodes since the middle of the fourth season. Their characters were best friends onscreen, but it quickly became a facade. The writers used all kinds of tricks to make it seem like the two characters were still close, by making them just miss one another in a scene or pretend to talk on the phone to one another, but it’s unusual they didn’t film a scene together for an entire season, until Archie was eventually written off the show. Another important tidbit is that Margulies is a producer on the show which gives her a lot of power, so if the two didn’t get along in real life she could have easily manipulated the show into taking a direction where the two characters fall out. Neither the creators of the show, Archie or Margulies will outright comment on the subject, but state their characters had a falling out after Kalinda reveals she once slept with Alicia’s husband. No one will ever know the truth, but only speculate based on how it all played out.

Some fans might be surprised to learn that Julianna Margulies naturally has really curly hair! On The Good Wife, Alicia Florrick’s hair is always perfectly styled in a dark, straight bob. When she appeared on the David Letterman show she revealed she wears a $10,000 wig to play the character of Alicia! “My own hair is very curly and they wanted her to look coiffed and have straight hair. I thought, ‘Oh my God, 22 episodes a year, 14 hours a day’ and if the weather changes my hair starts growing like a Chia pet.” So as a result, instead of ruining her hair and spending all that time trying to mold it to perfection, she just wears a wig. 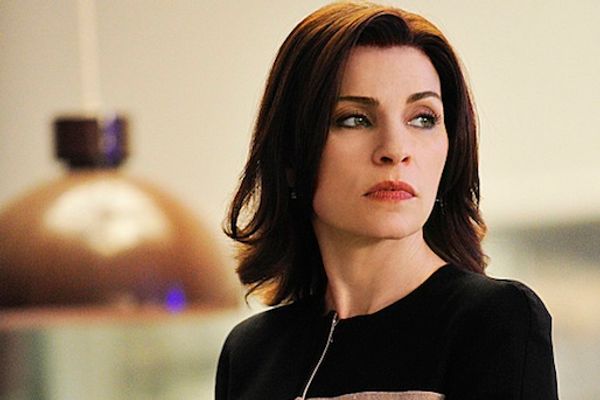