Kanye West is ridiculously talented; however, his personal blunders and inability to monitor what he tweets makes him somewhat difficult to like at times. We’re trying to forget all that and get back to what’s interesting about the rapper. He’s lived a rather fascinating life, which is why we have these 10 interesting things that you probably don’t know about him!

The Grammy-winning rapper was born in Atlanta, Georgia. His father, Ray West, was a former Black Panther and award-winning photographer while his mother, Dr. Donda C. West, was an English professor. They divorced when Kanye was three years old and he and his mother relocated to Chicago, Illinois.

When Kanye was 10, he and his mother moved to to Nanjing, China, where she was teaching at Nanjing University as part of an exchange program. Despite being the only foreigner in his class, he settled in quickly and picked up the language, although he doesn’t remember much of it now.

He began writing poetry when he was five years old. In third grade, it became apparent to his mother that he had a passion for drawing and he began rapping. In grade seven, he began making musical compositions and selling them to other artists.

When the rapper was 13, he convinced his mother to pay $25 an hour for time in a recording studio. The place was a total dive. It was a small basement studio where a microphone hung from the ceiling by a wire clothes hanger.

After finishing high school, Kanye received a scholarship to attend Chicago’s American Academy of Art, but then transferred to Chicago State University to study English. At the age of 20, he realized that being in class all day interfered with his musical work, so he dropped out to focus on his music ambitions.

Before making it as a rapper, he was a successful producer. He got his big break in the year 2000 when he began producing for Roc-A-Fella Records. He is often credited with revitalizing Jay-Z’s career because of his contributions to the rap superstar’s 2001 album The Blueprint and he also produced records for artists like Beanie Sigel, Freeway, and Cam’ron and crafted hit songs for big names like Ludacris, Alicia Keys, and Janet Jackson.

Even though he found a lot of success as a producer earlier on his career, his dream was to be a rapper; however, he struggled to obtain a record deal, mostly because he didn’t portray the gangster image that was prominent in mainstream hip hop at the time. Damon Dash reluctantly signed West to Roc-A-Fella Records in 2002 to prevent him from signing with another label. One of the reasons that Dash was so reluctant was because Kanye’s background contrasted so much with the other labelmates.

In 2002, he fell asleep while at the wheel of his car and got into a head-on collision, which left him with a fractured jaw that had to be wired shut in reconstructive surgery. He composed the song “Through the Wire” about the experience after the accident.

His debut album, The College Dropout, was leaked months before its release date, so he used the opportunity to review the album. When it finally was released, it was significantly remixed, remastered, and revised.

In 2015, the School of the Art Institute of Chicago awarded him an honorary doctorate for his contributions to music, fashion and popular culture. 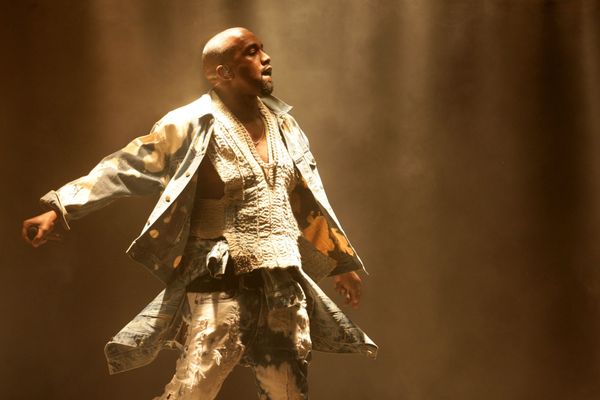