Kylie Jenner has been famous for most of her life. She wasn’t even a teenager when her family’s reality show Keeping Up with the Kardashians began taking off. Now she’s a household name. Despite her superstardom, there are still photos of Kylie that most people haven’t seen. Check out these rare pics:

Kylie attended a private concert by the Jonas Brothers to celebrate the launch of 77Kids in 2008 with her mother Kris and sister Kendall. She was only 11 years old in this picture and a minor star thanks to her family’s reality show.

While Khloe Kardashian was married to Lamar Odom, she and her family went to a lot of Los Angeles Lakers games. Here Kylie is with Khloe in 2010 watching a game between the Lakers and the Phoenix Suns.

The reality star attended the Fashion Night Out celebration in Los Angeles in 2012 with her sister Kendall and her mom, Kris. Kylie donned a pair of sparkly pants with a plain grey tank top and a pair of black heels.

Kylie joined her sisters Kourtney, Kim and Kendall at the premiere for Twilight Saga: Eclipse in 2010. Kylie would have been 12 years old in this picture and she was already taller than Kourtney and Kim.

As a child who grew up in Los Angeles, Kylie began attending film premieres and events when she was young. Here she is with her parents, Kris and Bruce (now Caitlyn), and her sister Kendall at the premiere for the Disney movie Holes.

Kylie and her sister Kendall were at the Los Angeles premiere of The Twilight Saga: Breaking Dawn – Part 1. Looking at this photo from the premiere, you’d think that the reality star was one of the stars of the film!

Twelve-year-old Kylie showed up at the SK8 4 Life event benefiting the Rob Dyrdek Foundation in 2010 with her sister Kendall. It must have been a fun time. Travis Barker, The Cool Kids, and Rob Dydrek and Friends along with N.E.R.D performed.

The reality TV starlet attended KIIS-FM’s 2008 Wango Tango Concert with her sister Kylie in 2008. She clearly was still developing her sense of style at this point as her outfit is not at all flattering. It looks like she was just mixing and matching different styles!

The Kardashian sisters launched their Kardashian Kollection for Sears in 2011 and celebrated with a launch party, which included their younger half-sisters Kendall and Kylie. Fourteen-year-old Kylie looked really mature in this black bodycon dress.

Bruce (now Caitlyn) and Kris took their two youngest children Kendall and Kylie to the 22nd Annual Santa Barbara Triathlon in 2002. Bruce was competing in the event to benefit the Dream Foundation in Santa Barbara.

Kylie joined her older half-sister Kim for the grand opening of The Sugar Factory American Brasserie in Las Vegas in 2011. Here she is holding a 125-carat, one-of-a-kind, diamond-studded Couture Pop.

The Keeping Up with the Kardashians star was at The Hunger Games premiere in 2012. As always, she came with her sister Kendall. According to Kylie, if she and the other members of the Kardashian-Jenner clan were in the Hunger Games, she would definitely win. “We [the Kardashian family] play extreme hide-and-seek and I’m always the last one standing – that’s why I’d win. Kim [Kardashian] would be the first one to go in The Hunger Games,” she said.

Kylie posed for photographs at the Onitsuka Tiger’s record release party for Selena Gomez and the Scene back in 2009. At this point, she had not yet perfected her red carpet posing hence the awkward pose. She looks kind of uncomfortable here!

Jenner was at the L.A. premiere of Easy A with her sister Kendall. She rocked this back and grey mini-dress with black heels. She would have only been 13 in this picture, which is so young, but there was something about her that seemed so much older than her years.

The youngest member of the Kardashian/Jenner klan looked gorgeous at the MTV Movie Awards back in 2013. She wore this beige bodycon pencil skirt with a white crop top and a simple gold necklace. It was a very mature look for a 15-year-old girl!

The reality TV starlet attended the premiere for Justin Bieber’s 3-D concert film “Never Say Never” with her sister Kendall. The two have been friends with Bieber for years and there have been rumors that there have been various flirtations between the sisters and the pop star.

In 2012, the youngest Kardashian/Jenner attended the Harlem Globetrotters 80th Anniversary “Unstoppable” North American Tour with her dad. She looked so much like her older sister Kendall with the freckles and dark hair!

Back in 2012, Kylie dabbled in modeling. Here she is walking the Abbey Dawn runway show. Abbey Dawn is Avril Lavigne’s clothing line. At the time Lavigne was dating Kylie’s half-brother Brody Jenner and the two had gotten quite close.

The television personality was seen at the wine and food festival The Taste of Beverly Hills in 2010 along with her mother, father, half-brother Rob, and her half-sister Kourtney and her boyfriend, Scott. She definitely stood out in this silver cocktail dress.

The Kardashian-Jenner clan were out and about for celebrity candids in 2008. It looks like they were promoting Kim who was on Dancing with the Stars at the time and doing some shopping at Dash and Kitson.

The reality star attended KISS FM’s Wango Tango concert at the Staples Center back in 2010 with her sister Kendall and her half-brother Rob. Can you believe that Kylie was only 12 years old in this picture? She looks like a young adult!

Kylie arrived in style at the 2011 Teen Choice Awards. She wore this champagne-colored BCBGeneration dress and with BCBG heels and was joined by her sister Kendall and her old half-sisters Kim, Khloe and Kourtney Kardashian.

Who knew Kylie had a green thumb! Here she is with her mother planting a vegetable garden at their Calabasas home back in 2009. Other members of the Kardashian/Jenner family were there helping out too, including Kourtney, Kim, Khloe and Kendall.

In 2012, the reality star attended the world premiere of the family comedy Mirror Mirror with her mother, Kris. The 14-year-old brunette beauty’s career was really starting to take off at this point. She and Kendall had recently teamed up with Gilette Venus for a new summer campaign.

Jenner showed up at the 2010 Teen Choice Awards with her sister Kendall, as well as her three half-sisters and Khloe’s husband Lamar. It was a family affair! Jenner looked particularly lovely in this little white cocktail dress.

It was another Kardashian/Jenner family affair at the grand opening of Kardashian Khaos in Las Vegas. Even though Kylie was just 14 years old in this picture, she looked all grown up in this bodycon dress.

The youngest member of the Kardashian-Jenner clan attended the 2013 American Music Awards with her sister Kendall. While her outfit was super cute, her big blunt bangs were not. They totally overwhelm her pretty little face.

Kylie and her sister Kendall joined their older half-sister Khloe for the premiere of the film Burlesque. Kylie looked really mature in this tan-colored dress with a chunky belt and a pair of heels. She definitely wasn’t your average teenager!

In 2012, the twelve-year-old reality star joined Kim, Kourtney and Kendall at the Teen Choice Awards. While Kylie looked cute in a white dress and a leather jacket, her sister Kim looked almost unrecognizable with her blond hair.

In 2011, Jenner attended the Hollywood Style Awards where she and her older sister Kendall took home the “Stylish Sisters” award. It was another family affair as their older sister Khloe presented the award to them. 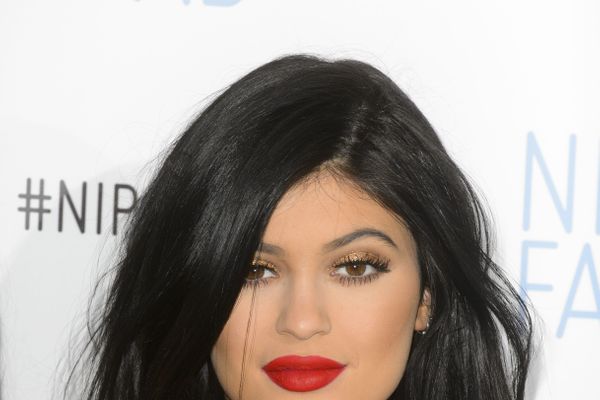