These days, Kylie Jenner is always making headlines – and for all of the wrong reasons. We do feel badly for her. She grew up on camera and she doesn’t exactly have the best role models around to show her how to live a scandal-free existence. Instead she has her older Kardashian sisters who think any press is good press and her mother Kris Jenner who is always looking to make a quick buck, even if it means prostituting her family. Even if we do feel for Kylie, it is kind of hard sometimes to sit back and silently watch all the trouble she gets herself into. In case you’re having trouble keeping up with Kylie and all her drama, here are 9 scandals that her family has tried to sweep under the rug!

Back in 2013, Kylie Jenner allegedly threw a massive fit at a Beverly Hills hotel when a host refused to serve her and her underage friends alcohol. She reportedly pulled the “Do you know who I am card?” Apparently they knew exactly who she was, which is why they wouldn’t serve her.

The young reality TV star caused a stir on Twitter when she posted a selfie with the caption, “I miss my black hair I’m so bipolar.” While we’re fairly certain that she wasn’t looking to cause controversy, a number of her followers attacked her for being ignorant. “You’re not ‘so Bipolar’, you’re indecisive…and a moron,” one follower wrote.

Kylie Jenner and Selena Gomez reportedly fell out because of the former Disney star found out that her young friend was sending flirty texts and sexy photos of herself to Justin Bieber. Selena and Justin had been doing the on-again off-again thing and Kylie knew this. Selena allegedly found the texts on the “Baby” singer’s phone and ended things with him and then unfollowed Kendall and Kylie on Instagram.

The 17-year-old found herself in the middle of controversy when she posted a photo of herself on Instagram in what looked like black makeup with the caption, “What I wish I looked like all the time.” In response to the outcry, Kylie posted another photo from the same shoot with the message, “This is a black light and neon lights people lets all calm down.”

A Much Older Boyfriend

The young reality star has been dating a much older man – 25-year-old rapper Tyga. He literally left his family, Blac Chyna and his son King, to be with Kylie Jenner, which hasn’t been sitting well with his ex. Tyga initially denied that he was dating the 17-year-old, but he confirmed it on Instagram by posting a photo of his young lover with the caption, “Certain things catch your eye, but only few capture the heart.” Kylie’s family doesn’t seem to see anything wrong with her dating a man who is eight years her senior. Her brother-in-law, Kanye West, told Power 105.1’s The Breakfast Club that he thinks Tyga was “smart” to get “in early.”

Kylie Jenner recently confirmed something many of us have been suspecting for at least a year now – her big lips are the result of lip injections. She and her family spent a considerable amount of time denying that she has had anything done. Kim told the beauty blog Pixiwoo that Kylie only uses lip liner on her lips, which didn’t help to explain the trout pout the teen was perpetually sporting. Since Kylie was only 16 when she starting getting lip injections, this means that Kris Jenner had to give parental consent, which presents a whole new set of problems. 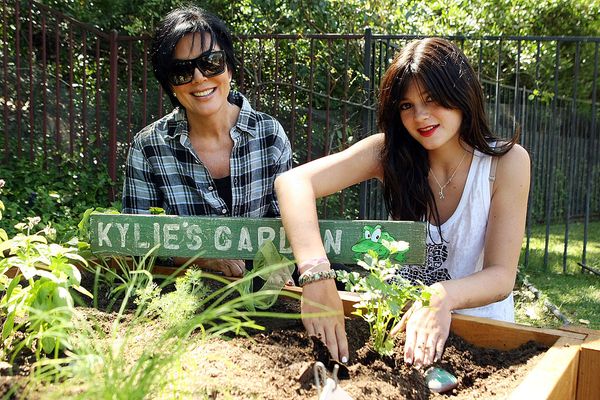