This absolutely stunning actress turned businesswoman is best known for her role as Dr. Addison Montgomery on the Shonda Rhimes series, Grey’s Anatomy and Private Practice. Kate Walsh, also known as Kathleen Erin Walsh, most recently starred in the hilarious NBC sitcom Bad Judge, and it’s pretty clear that she is not only insanely beautiful, but she’s also incredibly talented. At the age of 48, Kate’s career skyrocketed to an unbelievable level of success — her brief guest appearance on Grey’s went from a five episode appearance to a 57 episode recurring role and then a starring role on her own series! Today, she’s very focused on building up her business ventures, despite fading from the acting scene a little bit, Kate still has a fiercely loyal fan base from her days on Grey’s and Private Practice. Here’s a look at 10 things you might not have known about this red-headed actress:

Kate is such a huge fan of the opera she once accepted a date with a man just because he had tickets for a show. However, she had to put up with a lot in order to get these tickets to the Metropolitan Opera. In an interview with Best Life in 2007, she said, “I get into the car, and the first thing this guy does is  spray me with perfume. I don’t even know where it came from. Maybe it belonged to the last woman he killed.” I think that’s what they call a ‘red flag’…

She had to wear a fat suit for her first major television role! Kate played Nicki Fifer, Drew’s girlfriend on the third season of The Drew Carey Show back in 1997. Her character was a model who was struggling with her weight. When asked about the experience, she said, “They basically flew me out from New York [to L.A.] for about a five-minute meeting with Drew Carey. I took the chance and packed my bag for 30 days and ended up doing 11 episodes.” Score! Kate has a history of making memorable impressions and extending brief appearances on shows into roles. For example her guest appearance on Grey’s which grew into a starring role on her own show. Her other notable jobs have been on Bad Judge, Fargo, Kicking & Screaming, Wake Up, Ron Burgundy, The Perks of Being a Wallflower and Legion. Before she was cast in Grey‘s she appeared in the film Under the Tuscan Sun in the character of Sandra Oh’s (Christina Yang) lesbian lover!

Kate grew up in San, Jose, California and Tuscon, Arizona. As a kid, her dad worked as a prison psychologist — he paid her $5 per page to type psychological profiles on the inmates he treated. Talk about a bizarre first job! As a teenager she worked at Burger King and Dairy Queen, but she admitted to People during an interview that she got fired when she was only 14-years-old. “I had a runny nose and the assistant manager didn’t like me!” She describes herself as a bit of a troublemaker in an interview with Redbook, and that might have something to do with being the youngest of five siblings. She recounted a story from her school days: “There was a time in seventh grade when I would do anything on a dare. My friend dared me to dance on a teacher’s desk with a rose in my mouth, and I did it. That’s why I’m an actor, probably!” Her parents divorced when she was young, and so she moved a lot; in fact she moved 10 times and went to 15 different schools! This forced her to become more outgoing and form quick bonds with other children so that she could make friends.

Kate started getting involved in theater while attending the University of Arizona where she studied acting and regional theater. Once she graduated, she moved to Chicago and began working at the Piven Theatre Workshop, and later on the Chicago Shakespeare Repertory. She landed a job at National Public Radio performing in the radio play production Born Guilty and then moved to New York City to join the comedy troupe “Burn Manhattan” and perform in Off-Broadway plays. Kate has come a long way in her career since then, but looking back, she said during that time she thought she had made it. In an interview with the Los Angeles Times she said, “In New York, I’d be like, ‘This is it, man, I’ve got it now.’ And then I would collect unemployment and waitress.”

#TBT courtesy of @alecsulkin who found this old headshot from some old headshot book. It really says ‘PLEASE: hire me’   A photo posted by Kate Walsh (@katewalsh) on Feb 11, 2016 at 5:48pm PST

In 2010 she founded a beauty and lifestyle company called Boyfriend LLC. The first product was released in November 2010 and was a perfume called “Boyfriend.” Her business ventures have been a huge success — she created the “Boyfriend kit,” which includes the Boyfriend eau de perfume, pulse point oil, dry body spray, body cream and votive candles. She exceeded their sale expectations by selling out on the first day! She also released another fragrance called “Billionaire Boyfriend” which has become an international success. When asked about the inspiration behind her perfume line she said, “The idea is for each ‘Boyfriend’ to have a different story and relationship. The second one that came out this spring is Billionaire Boyfriend, and it’s this awesome year-round fragrance with this oriental floral scent that just feels so decadent. It’s this fantasy of love and letting him spoil you, almost like a homage to the 1960’s Monte Carol.” In 2009 she also launched her own official website.

Kate Walsh openly admits she’s a crazy cat lady, but that she likes to believe she makes being a cat lady look cool. She has two cats and two dogs. Her dogs names are Rosie and Lucy and her cats are named Pablo and Billy. Her Instagram page is full of pictures of her with her two tabby cats!

She was a runway model in Japan during the early 1980s. This career apparently came about when she left to teach English in the Far East and she got recruited because of her slim physique and good looks. She reportedly hated modeling there though because the small clothes made her feel like a giant! She said, “It was awful…First of all I was too big for everything. I felt like Godzilla. I did ski wear and then a bridal show and everything was a little tight and a little uncomfortable.”

The romantic comedy, The Sweetest Thing, starring Cameron Diaz, was written by Kate’s best friend, Nancy Pimental. The film’s two main female characters are based on Nancy and Kate. You can find Kate on the DVD’s special features!

Kate started dating the movie studio executive Alex Young and after only seven months together he proposed on a trip to San Francisco. They married in September of 2007 at the Ojai Presbyterian Church in Ojai, north of Los Angeles. But the marriage was short lived because the two got divorced 15 months later in December 2008 — she cited irreconcilable differences as the reason. After her divorce she told Redbook in an interview, “I don’t think anyone gets married thinking that they will get divorced. We certainly did not. Alex and I still care for each other, and I wish him nothing but the best. The silver lining to this, however, is that I have a wonderful family and a great group of friends who really showed their support and encouragement, and for that I am truly grateful.” It was reported their divorce was very messy with Young’s rejected demands for spousal support and mutual restraining orders.

Kate is almost in her fifties now and naturally she’s continuously faced the question of whether or not she ever wanted kids, still wants kids and what not. Despite choosing to focus more on her career and waiting for the right man, back in 2011 Kate said she’d still like to have children. “I feel like a loser [for not having kids]. I would definitely love to be a parent. But I definitely don’t think I want to do it on my own. I thought I’d be married and have three or four kids. I always knew I wanted to be an actress, but I think I always wanted a quote-unquote normal life.” She definitely has that maternal instinct! She’s heavily involved in the Operation Smile charity project and she said her favorite thing about working on the Grey’s set was being around children all the time. 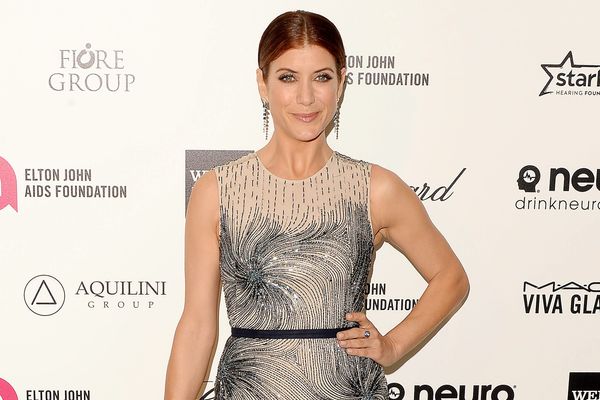