On September 17, 1972 CBS launched M*A*S*H, but absolutely no one could predict the success that it was going to become! Following its 1972 premiere, the series went on for 11 incredible seasons before coming to an end in February 1983, and in those 11 years had created a passionate and loyal group of viewers and fans, who helped to carry the show on for three times longer than the Korean War that the series was depicting. There was MASH the book and MASH the movie, but here are 10 things you never knew about the iconic M*A*S*H television series:

Although M*A*S*H was described as a comedy, fans quickly learned that there were as many sobering moments as there were silly moments; however, much of the comedy on the show was definitely “dark.” Due to this difference when compared to most of CBS’ other sitcoms, there was a dispute over whether a laugh track should be used or not. While CBS wanted one, the producers didn’t agree, and a compromise was made where a laugh track was used except for scenes in the operating tent. As the seasons went on, and there was push back from the audience, the laughing became quieter and quieter. Meanwhile the BBC thought the laugh track was completely inappropriate and omitted it all together in U.K. broadcasts.

As members of the 4077th Mobile Army Surgical Hospital, the crew always donned uniforms — from what fans could see. Although it might have looked like everyone was decked out in Army attire, they actually hardly ever wore their Army boots. The boots became problematic for filming because of how much noise they made on the sound stage and how uncomfortable they were to wear. For those reasons most scenes were shot from the waist up and then the boots were only worn when full body-shot scenes were required and, in reality, most of the time the cast were just wearing sneakers.

Since coming to an end in 1983, M*A*S*H has remained one of the most iconic shows in pop culture and is one of the highest-rated series in U.S. television history, but it didn’t start out that way. Many fans don’t realize that the series was in serious jeopardy after its first season and the network was struggling with whether to just cancel it right then. Fortunately, they gave it a second season and moved it to a better time slot, right after All In The Family, where it became one of TV’s top 10 programs.

For three seasons Wayne Rogers starred as one of the central characters Trapper John McIntyre before, to the dismay of fans, he left the series. Although he had originally intended to return for season four, Rogers felt that his character was constantly overshadowed by Alda’s Hawkeye Pierce character, and got into a dispute about his contract. When he quit, the network was considering a breach of contract lawsuit and even threatened him with it, but the whole thing had to be dismissed when it was revealed that Rogers never actually signed his contract when he started on the series because he didn’t agree with the standard contract given to actors at the time and felt that the “morals clause” was antiquated.

Of the entire cast two members actually served in the U.S. Army: Jamie Farr, who played Klinger, and Alan Alda, who played Hawkeye Pierce. Alda was in the Army Reserve for six months in Korea and Farr enlisted and was stationed in Japan and did a USO Tour through Korea. Meanwhile, Wayne Rogers, known for his role of Trapper, was in the U.S. Navy for a period of time as a ship navigator and Mike Farrell, who played BJ Hunnicut, was in the U.S. Marine Corps. Due to his time in the Army, Farr’s dog tags on the show were the actual ones from his service and he revealed they held his real personal military info which included his real name, serial number and religion.

Gary Burghoff as Cpl. Waltar ‘Radar’ O’Reilly was one of the show’s most popular characters, but there was something about him that many fans never noticed. Burghoff’s left hand has a small deformity in which three of his fingers are smaller than normal and two of his fingers were slightly fused together by extra skin. Burghoff did not want it focused on in the series. In order to take any emphasis off his hand, Radar is usually seen holding something or simply has his hand in his pocket. His hand can be seen at the beginning of the pilot episode when he is holding a football and in a season six episode when his character is trying to lift weights.

When watching the series when it first aired fans probably didn’t notice many of the guest stars because most of them weren’t big celebrities yet. Watching the show on re-runs now, however, fans have spotted many familiar faces they forgot were even on the show. Leslie Nielsen appeared in the episode “The “Ringbanger;” Patrick Swayze appeared in “Blood Brothers;” and John Ritter appeared in “Deal Me Out. As well, Alan Alda’s father Robert Alda made a guest appearance in two episodes including “Lend a Hand” which was written by Alda and was used to reconcile the pair who had real-life issues in their father-son relationship.

M*A*S*H writer Ken Levine offered viewers a behind the scenes look at the series through his blog where he revealed one hilarious story about dealing with the actors’ complaints about the script. According to Levine, there was one time in particular where the cast gave way too much “nit-picky” feedback on a script, so in retaliation Levine and the other writer made some changes to make it a “cold episode.” That meant the actors had to pretend they were in the Korean winter while standing around barrels of fire and wearing parkas when really they were filming in 100 degree heat at the Malibu ranch where the show was filmed. Levine said, “This happened maybe twice and we never got a ticky tack note again.”

Fans will remember that in the second last episode of the series “As Time Goes By” the characters buried a time capsule in the ground, and as it turns out, they had done it in real life. Unfortunately only two months after the episode was shot, the land was sold and the time capsule was quickly uncovered by a construction worker. Unsure of what to do with it, he contacted Alan Alda who then told the man just to keep it, but when telling the story, Alda added that the man “didn’t seem very impressed” by the piece of M*A*S*H memorabilia.

M*A*S*H was actually filmed in two different sets with one being in the mountains near Malibu, California, which was used for most of the exterior and tent scenes. The mountain set was the same one used in the MASH movie, and the indoor set was on a sound stage at Fox Studios in L.A. Then in 1982, just as they were finishing the last episodes of the series, a brush fire ended up destroying most of the outdoor set and the ever adaptable writers simply wrote it into the series as a forest fire caused by incendiary bombs. 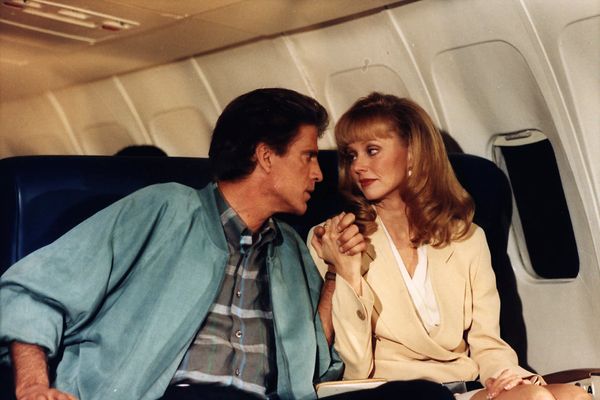