Paul Rudd is one of the funniest actors who has been in pretty much every single successful comedy and romantic comedy that has hit the box office within the past 10 years. And to top it all off, he’s probably one of the nicest men in Hollywood! He’s been in the business for quite some time now and made a great career for himself as a comedian, writer, producer and actor with numerous film and television credits under his belt. He’s one of the most well liked actors, but to our dismay he’s also fiercely private. Fans don’t know much about the off-screen Paul Rudd. We did some digging though and found 10 things you probably didn’t know about Hollywood’s favorite funny guy:

Despite being recognized as one of the funniest guys in Hollywood, often taking on roles in successful comedies and working alongside fellow comedians Jason Segel and Will Ferrell, he doesn’t see himself as a comedian. In an interview with Vulture he said, “I didn’t want to just do specifically comedy. I still don’t want to just specifically do comedy. I never went to Second City. I didn’t do stand up. I studied classical theater. That was my thing.”

Paul Rudd first met Jack Nicholson when filming the movie Everything You’ve Got. In the movie, Paul played Jack’s son and in the film the two play the type of father and son who kiss each other hello and goodbye. So the first time Paul met Jack Nicholson he said, “[Nicholson] just swept into the room, kissed me on the lips, laughed, and sat down. It was hilarious. He’s Jack Nicholson. Where do you go from there?”

8. He’s a Huge Fan of Steve Martin and Mel Brooks

He admitted during an interview with GQ that he used to collect everything that had to do with Steve Martin. It was his obsession with Steve Martin that actually lead him to Judd Apatow, and a lot of job opportunities because Apatow is a director who’s cast him in a lot of his films. When Paul was at a dinner party, he made a remark about how he loved the names Martin came up with, particularly Gern Blanston. Someone at the party mentioned that Judd Apatow had an email address that was similar. Paul had never met him, but reached out to him via this email address to express their shared love of Gern Blanston. When Steve Martin caught wind of this story through a published interview, he sent him a copy of his memoir, “Born Standing Up” signed with the name “Gern.” Rudd said, “It was one of the greatest things I’ve ever gotten in my life. That was definitely one of those life moments.”

7. He Once Jumped Out of a Moving Car

In an interview promoting his film How Do You Know, the interivewer asked Paul if he had any personal stories about blind dates that went horribly wrong. He said he had one that wasn’t a blind date, but rather a double date. He was driving home with his friend and their dates, and the evening quickly became about making the women laugh. Paul decided it would be funny to jump out of the car while driving and run alongside the car while continuing his conversation, but it went horribly wrong when Paul couldn’t keep up with the car, it veered off the road and hit a tree! He said the joke definitely backfired because “nobody laughed,” and they drove home in silence.

6. He’s Pulled the Same Prank on Conan O’Brien for 15 Years

For the past 15 years, every time Paul Rudd appears on the Conan O’Brien to promote his newest film he pranks Conan with the same clip from the ’80s film, Mac and Me. It always happens when Conan goes to introduce the clip from Paul’s new film, and somehow Paul manages to sneak in this 80’s flop clip. The clip he shows is of Jade Calegory in a wheelchair going over a cliff into a lake and then Mac pops up at the end with a surprised look on his face. It’s hilarious how long he’s managed to keep up this joke going, and Conan falls for it every time!

Paul Rudd has a lot of famous friends in Hollywood that only add to his cool factor. Some of his close friends include Amy Poehler, Adam Scott, Jennifer Aniston, and Jason Segel. Talk about squad goals! Not only is he friends with these fellow actors, but he gets to work with them all the time. One of his closet and oldest friends is Jon Hamm from Mad Men. The two have been friends since childhood and remained close ever since.

There isn’t much out there about Paul Rudd in the media or even in interviews because he doesn’t like to promote himself. He once said in an interview that when people know too much about him it takes away from whatever role he’s trying to play, “I much prefer to just sort of show up and do the job and not really have anybody know too much about me as a human being simply because it makes the roles a little less interesting.” In addition to himself, he also likes to keep quiet about his family, especially when it comes to his two kids and wife Julie Yaeger. In an interview with Elle magazine back in 2011 Rudd admitted he’s not the typical Hollywood actor, “I don’t think I’m going to sell a lot of tabloids.” However, some secrets lie in his films. He said the film This is 40 was fueled by his marriage and his co-star Leslie Mann’s marriage to Judd Apatow (the director).

When he was filming the movie Clueless in Los Angeles he was mugged. He was returning to his car after having dinner with a friend at Jerry’s Deli in the Valley when out of no where a man grabbed him and asked for his money. Rudd told GQ in an interview that the man said to him, “This is a real gun. Watch out, because I’ll f-cking kill you.” The man fired the gun and it went right through his hair, “I just remember the sound of it. I remember people in the parking lot being really freaked out. But I just got very calm. Then I had to go to work the next day. It was a scene at a club. I was dancing. And I had just been shot at the night before.”

Paul Rudd’s parents are from England, his dad was a sales manager for TWA with the company hub in Kansas City — hence how he ended up in America. According to Rudd, his parents were nonreligious Jewish liberals. When asked about his hometown he said, “It seemed a weird match, but there is something I really, really loved about growing up there, and something I love about going back. I think the people do seem genuinely happier. They seem nicer.” Being Jewish, Paul had his own Bar Mitzvah and seemingly helped host some others. In the video below Paul Rudd is the one with the microphone, wearing the yellow ruffled shirt and shorts — not exactly following the proper dress code!

1. His Lost a Friend Before Clueless

Right before Paul Rudd was hired to make the film Clueless, he was starring in a play called Shelley and Byron with a friend named Justin. However, during this time his friend was killed in a traffic accident in Los Angeles. At the time Paul was only 24-years-old and Justin was even younger at only 22-years-old. In an interview with GQ, Paul said his death deeply affected him and he went into a serious soul-searching funk afterwards. He said: “It was weird because he wasn’t that great a friend of mine, but it hit me. You know, Shelley and Byron were haunted by ghosts. It all seemed kind of coalesce, this moment in my life, where it really made me question everything and really start trying to figure out things that…I suppose…are unfigureoutable.” 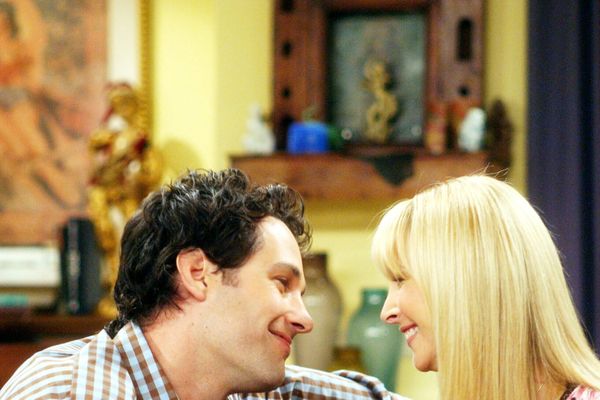