Pretty Woman has become an iconic film from the ’90s. The American romantic comedy was directed by Garry Marshall and acted as the launching pad for Julia Roberts’ career as she starred alongside seasoned actor, Richard Gere. Pretty Woman tells a very Cinderella-esque story of a Los Angeles hooker, Vivian Ward, who is hired by an arrogant, wealthy businessman, Edward Lewis. The couple spend a week together with her as his hired escort and end up falling in love. It’s been over 25 years since the film was released, but it’s still considered one of the most popular films of all time. The film received rave reviews and earned Roberts her second consecutive Golden Globe Award. Here’s a look at 10 things you probably didn’t know about Pretty Woman!

There was some serious photoshopping going on when the iconic promotional poster for Pretty Woman was created. Some might be surprised to learn that the body of Julia Roberts’ in that picture isn’t actually hers! Her head was superimposed on the body of famous body double Shelley Michelle for the poster. Also, ever notice how Richard Gere’s hair is dark brown in the poster, but in the movie it’s gray?

The original script by J.F. Lawton was much darker than the final product. In the original story, the movie was called “$3,000” because that’s how much a night with Vivian cost. Her character was supposed to be addicted to drugs, but was staying off cocaine for the week so she could save money to go to Disneyland. In this version of the film, there’s no happy ending. Instead of falling in love, Edward throws her out of the car, drives away and the movie ends with Vivian getting on a bus with her friend to go to Disneyland. According to Julia Roberts, it was “a really dark and depressing, horrible, terrible story about two horrible people.” It was supposed to be about the Los Angeles prostitution scene in the late eighties and early nineties. The director scrapped this idea because they wanted the film to have a more light-hearted feel. The script was re-written several times before it was finalized. In a weird twist of events, the movie ended up being produced by Disney, but the trip to Disneyland was totally scrapped from the script.

In the scene where Gere’s character snaps the jewelry box with the pearl necklace on Vivian’s fingers and she spontaneously laughs was actually improvised by Richard Gere. He wanted to make Julia Roberts laugh because she wasn’t feeling well that day. Looks like it worked! Director Garry Marshall said that the then-23-year-old actress would sometimes show up to set tired after a night of partying. “I said, ‘Richard, you gotta wake her up a little, so when she reaches for the box, slam it.’ It was a soft box. I would never hurt her,” said Marshall. The clip was intended for the gag reel, but at the last second they decided to include it in the final cut and now it’s become a trademark scene for the entire movie! The pearl necklace in that case was worth $250,000 and the store that owned the necklace sent a security guard along with it who stood beside the director the whole time during filming.

There were several other actresses who were up for the part of Vivian before Julia Roberts was officially cast. Daryl Hannah turned down the role because she thought the part was misogynist; Michelle Pfeiffer disliked the tone of the movie; and Madonna was considered, but later deemed too old for the role. When Marshall started looking at actresses under the age of 21, he considered Molly Ringwald, and then Winona Ryder and Jennifer Connolly, but both were too young. At the time the film was being produced, Julia Roberts was an up and coming actress. She’d had success with previous roles in Mystic Pizza and Steel Magnolias, but she didn’t have the reputation she has now. The producer, Steve Reuther, suggested 20-year-old Roberts and Marshall met with her. He was immediately charmed by her.

Edward takes Vivian to her very first opera show and ironically the show he takes her to is La Traviata which is also about a prostitute who falls in love with a rich man. It’s extremely reflective of the movie Pretty Woman. The opera tale ends quite tragically though, as the courtesan Violetta falls ill with tuberculosis. She sings one last song and then dies in her lover’s arms. The beautiful red dress that she wears almost wasn’t red! Costume designer Marilyn Vance told Elle in 2010 that the studio really wanted the dress to be black. “The studio really wanted black, but I knew it needed to be red. Before the decision was made, we ended up having to create three different dresses. We took every color, lit it, and shot her. Poor Julia had to sit for so many color test shots for that one dress. Finally, I was able to find the right shade and convince everyone to go [in] my direction,” said Vance.

In the scene where Richard Gere is playing the piano, that is actually him! Gere is a self taught musician. He’s considered to be an accomplished pianist and music writer. The piece that he is playing on the piano was composed by him.

As previously mentioned, Roberts was a new actress at the time this movie was made, so when it came time to do the love making scene, she was extremely nervous. She was so nervous that a vein became visible in her forehead and director Garry Mashall had to climb into bed with Gere and Roberts and help Gere massage the vein until it disappeared. She also broke into hives during that scene and had to treat them with calamine lotion until she was ready to film. She was also uncomfortable when she had to film the bathtub scene so Marshall put her at ease with another prank. During that scene, Vivian dunks underwater and then re-emerges. Marshall had the crew and even the cameraman leave the room while she was underwater so when she popped up she was all alone! In the blooper reel you can hear Roberts yell, “Everybody left! You f-ckers!”

When Julia is laying on the floor of Edward’s penthouse watching an episode of I Love Lucy and she laughs, it wasn’t because of what she saw on television, it was because director Garry Mashall was tickling her feet out of camera range! He had to do this in order to get Julia to do a genuine laugh.

While audiences everywhere have deemed Pretty Woman one of the most iconic romantic comedies of all time, the leading man doesn’t agree! Richard Gere revealed back in 2012 that Pretty Woman is actually one of his least favorite films. He told Australia’s Woman’s Day magazine that he’s not particularly proud of the ’90s flick and quite frankly deems it unmemorable. He said, “It’s my least favorite thing. People ask me about [it], but I’ve forgotten it. That was a silly romantic comedy.” The film was far from silly. It grossed over $463 million worldwide, became the fourth highest grossing rom-com in history, earned four Golden Globe nominations and launched Julia Roberts’ career into stardom. Gere went on to say that his biggest problem with the film is the fact that it makes guys like Edward, who have a real attitude problem, seem attractive. “[Pretty Woman] made [guys like Edward] seem dashing, which is so wrong. Thankfully, today we are all more skeptical of those guys,” he said.

Julia Roberts is the reason Richard Gere took the role as Edward in Pretty Woman. When he originally read the script, he thought his character was too dull. “How would you know? It was a silly little script, and when it came to me, the part was a suit. It was like put someone in the suit, basically,” said Gere. Garry Marshall tried really hard to get Gere to come onboard, but he kept turning it down, whereas Roberts was in from the get-go. To convince him to take the role, Marshall sent Roberts over to Gere’s office (which was also his apartment) and introduced the two actors to see if they had any chemistry. “I was so mesmerized I don’t remember Garry. I only remember this girl. We loved each other immediately. It was a nice thing. But to be honest, I didn’t know if I was doing this movie yet. She’s across from my desk, we’re getting to know each other, we’re flirty-flirty, nice-nice, it’s all going [well], and [Marshall] calls up and is kind of like, ‘How’s it going?’ And I’m going, ‘Yeah, yeah…’ She’s across from the desk and she takes a piece of paper and she’s writing something on it,” recalled Gere. Roberts had taken a Post-It note and wrote, “Please say yes.” Gere thought it was so sweet, he accepted the role right in that moment. 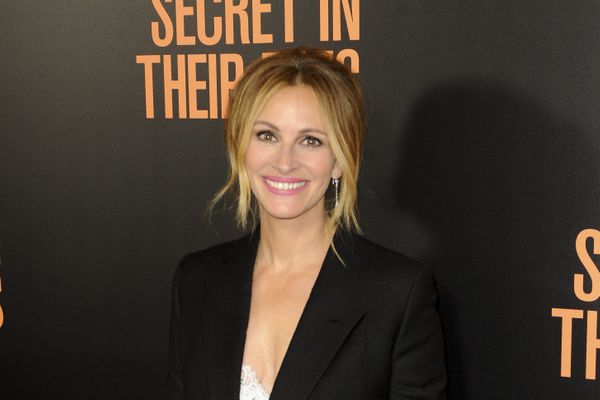