The Real Housewives of Orange County is gearing up for the premiere of season 11 on June 20th. It’s Bravo’s longest running Real Housewives series! As the original show of the franchise, RHOC is known for having a revolving door of cast members. The show started back in 2008 and only one original cast member remains — Vicki Gunvalson, the self proclaimed OG of the O.C. Each new season brings a new cast member, and fans are just as excited to see this one! The anticipation is coming to an end and so far all we know about her is that her name is Kelly Meza-Dodd, so we’ve decided to do some digging! Here’s a look at 8 things to know about RHOC newest star:

This 40-year-old housewife is the COO of Kiss Me Mirrors, a company based out of Newport Beach, California. She is married to Michael Modd, 58, the former president of LeapFrog Enterprises Inc.

Kelly and her husband Michael have one child together, a daughter named Jolie. She is 9-years-old and an avid cheerleader.

Just like her daughter Jolie, Kelly was a cheerleader. She was a member of the squad while attending high school.

It’s unclear if she was friends with any of the women before being cast as a housewife. Typically, Bravo casts women who are friends with someone currently on the show, but a quick scroll through her social media shows us Kelly is friends with former housewife, Lizzie Rosvek and Vicki Gunvalson. Her Bravo biography stated her friend and co-star Meghan King Edmonds warned Dodd not to get too close to Gunvalson, but only time will tell if she takes this advice and where they all stand at the season finale. We can only assume Meghan was the one who introduced Dodd to the Real Housewives family, but it seems she’s made new friends since she joined the cast.

Kelly’s biography on Bravo describes her as a loud mouth with a big heart, but also that she comes from a Latin linage. She later revealed in media statements that her background is Mexican.

I have the best brothers in world!!

Her marriage was formerly on the rocks, but the two have recently reconciled. Michael cashed out on his major tech toy company and now puts in his allotted family time by staying at home full-time.

Despite having a position as Chief Operating Officer at Kiss Me Mirrors, Dodd is listed as stay-at-home mom in her Bravo biography. Not only does she live at home with her daughter and husband, but her younger brother Eric and her mom Bobbi also live with them as well. Kelly seems like quite the nester!

Kelly was born in Arizona, but she eventually moved to Orange County, California. She also lived in San Francisco before moving to Corona Del Mar where she now resides in her four-story oceanfront home.

After scrolling through Kelly Dodd’s social media pages, it’s evident she’s really into sports! Dodd always has front row seats at the games and even sports team gear. In addition to being her daughter’s number one fan for her cheerleading, she cheers for her favorite teams which include the Los Angeles Lakers, Anaheim Ducks and the San Francisco Giants.

Kelly Dodd’s Real Housewives fame hasn’t even taken off yet and she’s already been embroiled in a racism scandal! TMZ cameras caught Dodd outside of The Nice Guy in West Hollywood where she appeared to be a little more than tipsy and made some questionable remarks. The paparazzi asked her if she liked black guys and she said, “I don’t like black guys, I don’t even know any black guys.” Dodd also commented that she was married and didn’t care about her husband because she had her M.B.A., which she revealed stands for “married but available.” Yikes! After the footage was released she released the following statement: “I am truly embarrassed. There is no excuse for bad behavior or comments that offend anyone. That video does not represent who I really am and I apologize for acting irresponsibly.” 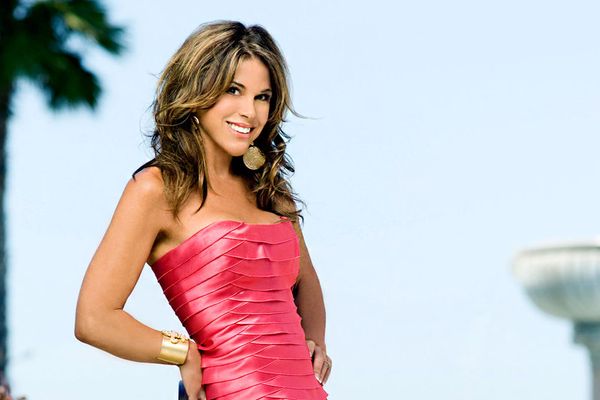