Scream Queens – starring Emma Roberts, Abigail Breslin, Billie Lourd, Lea Michele, Jamie Lee Curtis, Niecy Nash, Glen Powell and Keke Palmer – is heading into its second season, which will take place in a hospital and we know that we’re super excited! In preparation for season two, here are 10 things you didn’t know about the Fox series:

Creator Ryan Murphy cast Ariana Grande in Scream Queens after she took a meeting with him to get him to tell her spoilers for American Horror Story, which happens to be her favorite show.

Joe Mangianiello was initially cast as Weston Gardner, but had to drop out before production began due to “scheduling conflicts.” According to Fox, Mangianiello had to bow out because of his commitment to promote Magic Mike XXL, so Nashville’s Oliver Hudson was hired to take his place.

8. An Homage to Carrie Fisher

Billie Lourd, who plays Sadie Swenson, is the daughter of CAA agent Bryan Lourd and actress Carrie Fisher. Ryan Murphy wrote her part in the show after meeting her at a dinner party. The pink earmuffs she wears are an homage to her mother’s famous hairstyle in Star Wars.

Ryan Murphy knew from the start that he wanted Jamie Lee Curtis to be his leading lady, but she initially turned the role down when she found out that they would be filming in New Orleans. To make things easier for her, Murphy offered to group her workdays into four or five day periods so that she would only have to travel twice a month and could shoot her episodes together.

6. An Homage to Horror Movies

Part of what Ryan Murphy is doing is paying homage to the horror movies he loves while at the same time reinventing them for a modern era. “We’re very conscious to say in almost every episode that these girls don’t want or need men to rescue them,” he told Variety. “They want to be in charge of their own destiny, and if the killer’s going to be caught they want to do it.”

According to Ryan Murphy, the inspiration behind Emma Roberts’ character Chanel Oberlin was sorority girl Rebecca Martinson from Delta Gamma sorority’s University of Maryland chapter; she sent a racist and homophobic rant to its members about how to behave, which ended up going viral. “We were interested in mirroring that idea,” Murphy said. “Unlike that girl, who apologized and resigned, we wanted to bring our queen-bee character to some sort of awareness about her behavior.”

Jamie Lee Curtis earned the title “Scream Queen” after she was cast in several horror films in the ’70s and ‘80s, including Halloween, Halloween II, The Fog, Prom Night Terror Train and Roadgames.

3. Made for Emma Roberts

Emma Roberts didn’t have to audition for role of Chanel Oberlin. She had worked with Ryan Murphy on American Horror Story: Freak Show and he had called Roberts to tell her that he was working on a new show and had her in mind for the lead role.

The cast tries to bribe Ryan Murphy to find out who the killer is, but it doesn’t work. “They’ve been blackmailing me, bribing me, writing me. They all have their theories about who they think it is, and none of them have been right, which makes me very happy,” he told Variety.

The only person on the show who does improv is Nasim Pedrad. “Nasim Pedrad was one of the last people cast. It was a very hard part to cast. We really didn’t know what we wanted to do. That part, it wasn’t written for anybody. She’s a total scene-stealer. If you’re going to work with somebody that’s an improv genius from “Saturday Night Live,” you got to let them run. We let her improv all the time, and half the stuff that’s in the show is stuff she just says,” Ryan Muprhy told Variety. 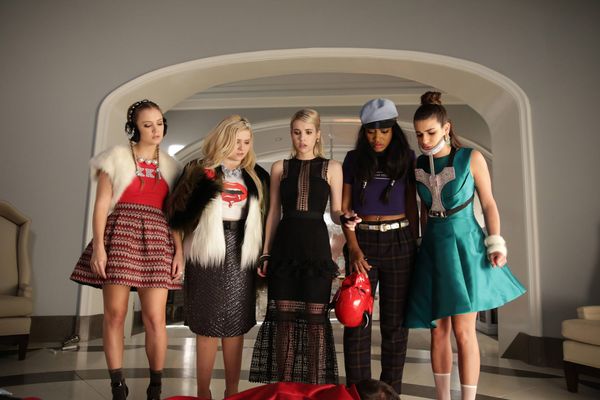