The critical success of Tina Fey and Robert Carlock’s Unbreakable Kimmy Schmidt is much deserved. The reasons for the show’s success are obvious — great writers, a Cinderella-sweet lead (Ellie Kemper), a prime spot airing as a Netflix Original in March 2015, and an inventive storyline revolving around the life of Kimmy Schmidt (Kemper) trying to make it in New York City after being held captive in an Armageddon-cult compound in Indiana for 15 years. But, there are many hidden gems of knowledge about this all-star lineup unknown by most viewers. Here are the top 10:

10. The Characters’ Names Are Significant

Do you ever wonder how writers come up with the names for their characters? Well in the case of Unbreakable, you don’t have to look much further than pop culture, oh…and ancient Greek mythology. The loveably hateable character Xanthippe Lannister Voorhees, the angry teenage daughter of Kimmy’s employer, is a prime example of the influence of both pop and ancient cultural tales over the naming of characters. Xanthippe comes from Greek mythology. As a minor but challenging figure of ancient myths, this name suits this antagonizing figure perfectly. Her middle name, Lannister, comes from the last name of a homicidal family in the Game of Thrones series. And her last name, Voorhees, is shared by the infamous killer portrayed in Friday the 13th. A rose by any other name wouldn’t be a challenging, lethal, psychopath.

9. The Show is Full of Famous Broadway Guest Spots

Due to the involvement of many of the actors in Broadway productions, the show continuously tips its cap to some of the greats of today’s theatrical productions. Tony Award winning performers Jefferson Mays, James Monroe Inglehart, and John Cullum have all had cameo roles in the series. Some up and comers like Nic Rouleau, currently starring in the Tony Award winning musical The Book of Mormon in London, have also been involved. The episodes of Unbreakable are simply littered with musical talent and epitomize the dream of living in NYC.

8. There Are Countless References to Fey’s 30 Rock

While the shows have not had an official crossover episode, Unbreakable serves as a Fey-Carlock lovechild produced by their previous collaboration on 30 Rock. The nervous humor and preoccupations of the 30 Rock characters seem to carry over into the lives of those of the Unbreakable series. Obsessions over feet and binge eating, the catcalling construction worker, and image of the werewolf are all Liz Lemon induced injections into the colorful world of Kimmy Schmidt. Viewers of the 30 Rock variety will no doubt take a guilty pleasure in this inside-joke brand of humor.

Have you ever noticed how Unbreakable makes you happy just by looking at it? That’s no accident. Color choices in wardrobe are meant to recreate and display the sun-shinning world of Kimmy Schmidt. The vibrant colors are everywhere, not just in the characters’ clothes. Normally grey-green visions of the streets of New York are back splashed with brightly colored signs, taxi cabs, and umbrellas. Basic rooms contain bright lights, a painted wall, vases, and decorative throw pillows that add to the aesthetic ambiance of joy. The show is just downright feel-good in every aspect.

6. Even the Creators Don’t Know Where the Story is Going

The blossoming friendship between Jacqueline and Lillian is the unintentional way the characters’ world molded together. In an interview with Entertainment Weekly, Robert Carlock admitted that, by the end of season one, he was surprised that they “had Lillian and Jacqueline off on a story together, which is something that in the first episode you couldn’t have thought would have happened. You do get a sense that we had a progression and we started to meld these two very, very different worlds, and I think that will be part of the fun of the next season.”

5. Jane Krakowski is a Key Member of the Dream Team

Growing up, Jane Krakowski, who stars as Kimmy’s wealthy, nervous socialite employer, was immersed in the theatre. Making her Broadway debut at 18, Krakowski has gone on to receive several theatre awards including a Tony Award. Her success on the small screen has been fueled by her relationship with Tina Fey. Together with Robert Carlock, this team has had an unstoppable presence since the airing of 30 Rock in 2006. Almost a decade later, the dream team has produced what critics are calling the first great sitcom of the streaming era. Krakowski reflected on going into her ninth season of television with Tina, that she’s “so thankful for that [working with Tina] every day, not only for the great characters but for the joy I get going to work every single day with her and with her great creative group.”

4. The Eccentric Landlady Lives up to Her Reputation

Emmy Award winner and Broadway performer Carol Kane, who plays Kimmy and Titus’s unconventional landlord Lillian, doesn’t seem to travel far without her faithful canine companion, and the red carpet is no exception. At Netflix red carpet Q&A session held June 8, 2015, Kane posed for the camera alongside her miniature poodle, Jack. Jack didn’t seem to be bothered by the flashing lights or having to sit relatively still during the panel discussion. This good behavior may just made Jack a star.

Actor Tituss Burgess hasn’t had much luck until recently in his pursuit of the big and/or small screens, but the man has got some pipes. He made his Broadway debut in Good Vibrations in 2005 and has since gone on to perform in musicals including Jersey Boys, The Little Mermaid, and Guys and Dolls. He also sang at the benefit concert, “Broadway for Obama,” in 2008. His casting as Titus in Unbreakable Kimmy Schmidt, suits this real-life struggling actor with a dream to a tee. It’s reported that after a week of not hearing back after his audition for the role of Titus, Burgess ate three pizzas in a day and had almost completely abandoned his acting career.

This woman has talent that belies any suggestion that we’re all created equal. From the on-set of her career with The Second City, Fey has remained a powerhouse with the Midas-touch. Rising to popularity on the sketch-series Saturday Night Live, she has proven that women in comedy are a force to be reckoned with. She has two Golden Globe Awards, four Writers Guild of America Awards, a nomination for a Grammy Award, eight Emmy Awards, and five Screen Actors Guild Awards under her belt. She acts, she writes, she produces, and has two successful sitcoms, 30 Rock and Unbreakable Kimmy Schmidt. We can without a doubt attribute the recent surge of comedic female leads to her writing genius.

As a member of the femme comedy legacy, Kemper lives and breathes her work. As it turns out, that super-duper, mega-personality of Kimmy’s we know and love on-screen is apparently not an act for Kemper. In fact, Fey commented at a Netflix For Your Consideration event that the initial idea for the show came from using Kemper as inspiration. “She has this sunniness and this strength combined, and that led us to a few different premises — and then we chose the least marketable one.” Kemper had met with Fey and Carlock months prior to the development of the show in order to display her brand of humor. “The next time I heard from them was a few months later. When they told me I’d play an escapee from a doomsday cult, I wasn’t sure they were serious.” The success of the show may just be that the actors aren’t acting. 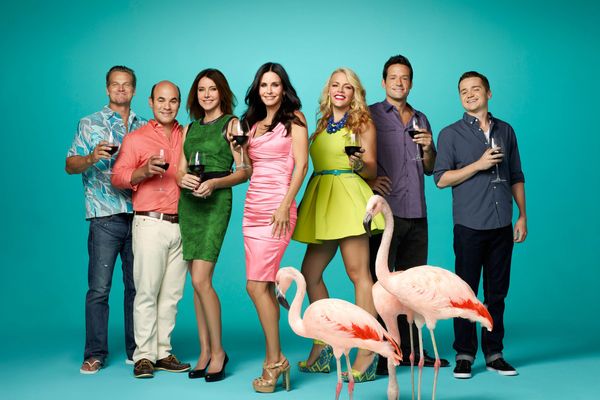