The best TV series are a form of escape for their viewers, and once fans become involved with a show they end up loving everything about it. The world the show sets up is very important and it has become a common theme for many popular teen shows to be set in small towns that may seems quaint and idyllic on the outside, but hide many secrets and lots of drama on the inside. It is very easy for viewers to get lost in these fictional towns and often wish they could visit them at least once, but some are much more exciting and inviting than others. Here are 11 small towns from popular teen series ranked from worst to best:

The teens of Point Place, Wisconsin, had to make their own fun living in such a small town and were lucky to stay out of any major trouble for the most part on That ’70s Show. Even though Eric, Kelso, Fez, Donna, and Jackie made it work, we actually didn’t get to see a lot of Point Place itself as most of the time was spent hanging out in Eric’s basement. While it definitely seems like the kind of place where friends stay close and great memories are formed, it was way too much of a typical American town to be anything spectacular or interesting.

To be honest, the small town of Rosewood, Pennsylvania, never seemed that appealing on Pretty Little Liars. While it is a lot like many other small towns, the only thing that made it more interesting was a stalker/killer and an underground fight club, both of which make Rosewood a place that many wouldn’t want to live, let alone visit. On the other hand, without a psychotic killer and the drama that goes along with it, Rosewood would just be a very boring Pennsylvania town, making it definitely not one of the best TV small towns.

The town of Neptune in Southern California may have been the fictional setting for Veronica Mars, but it was one of the most realistic portrayals of economic situations at the time when the series aired in the mid-2000s. While there was certainly a place for everyone in Neptune from hot Hollywood stars to biker gangs, it certainly wasn’t the best place around with murders, rapes, and other astonishing crimes seemingly constantly needing to be solved. Veronica Mars was a great, and hugely underappreciated show, but Neptune didn’t necessarily form a place that fans were wishing they could visit, and offered all the real life problems of crime, and racial and economic divides that far too many people are familiar with in their real life towns and cities.

Much like Neptune in Veronica Mars, Dillon, Texas, was far too real to give fans an “escape” from real life. In fact, it was so real, Friday Night Lights is still praised for its honest and realistic portrayal of middle America and the lifestyles of those living in it. While there is no doubt that many fans would have no issue living anywhere Tim Riggins is, the town really didn’t have that much going for it aside from football. Anyone whose interests varied outside of football had a really difficult time finding their outlet, but for those whose lives revolved around football, it was certainly the place to be.

Riverdale may be a small town, but there is enough going on that you would never realize it. From “twincest” to the murder of the town’s Golden Boy to the revelation that the most respected family are drug lords and their iconic business was a front for drug running, Riverdale is exciting, terrifying and always interesting. Riverdale is also the home to everyone from all socio-economic backgrounds meaning there is conflict and ever evolving social dynamics to also get a hold of. Being a new show, there is still a lot to learn about the town, but so far it has definitely proved to be a perfect setting for a gripping teen drama, and as home to the infamous Pop’s and the Archie gang, things are only going to get better and more intense in Riverdale.

Compared to the close by bustling city of Metropolis, Smallville was poised as a boring town full of endless corn fields, but there was so much more to it than that. Following the meteor shower that brought them Clark Kent, the town was never the same and it was most definitely never boring. From “meteor freaks” to Clark Kent, Smallville residents definitely lived among some interesting beings, not to mention Smallville was home to The Talon, one of the coolest hangouts around. While anyone who lived there or visited would be taking a risk of falling victim to strange meteor powers or worse those who got them, it can’t be overstated how amazing it would be to attend the same high school as Superman himself.

First of all, who wouldn’t want to live in a place called Mystic Falls? Before even encountering a vampire or two, residents would have to know there was going to be some strange happenings in the town, and it definitely delivered. Fans of The Vampire Diaries became as enamored with the town as they did the characters as Mystic Fall’s extensive, rich and often shocking history put everything in place for the Salvatore brothers to live there. Plus, no old small town has more festivals, costume parties and balls than Mystic Falls did, meaning that behind its old, charming exterior there was always something to do!

Tree Hill, North Carolina, was gorgeous and appealing as a town where everyone knows everyone, small business thrive and a river flows right through. Of course One Tree Hill fans know that the town meant different things to different people, and despite its close-knit nature, things were rarely if ever calm. From romance betrayals, to difficult family dynamics, to school shootings, murder and more, the streets of Tree Hill held a lot of drama and shocking moments. Regardless, fans couldn’t help but be drawn to things like Tree Hill High, Karen’s Cafe and the River Court, with the town’s basketball spirit and endless events like the Burning Boat Festival. Also, it can’t go unmentioned that those who live in Tree Hill seemingly become extremely successful from being an author, running a record label, becoming an NBA player, owning a multi-million dollar clothing line and being a touring musician, Tree Hill held some incredible talent, and despite where life took them, they always came back because as the wise Karen Roe once said, “In your life you are going to go to some great places, and you are going to do some wonderful things, but no matter where you go, or who you become, this place will always be with you. There is only one Tree Hill, and it is your home.”

California’s sunshine and beaches makes it one of the most inviting places ever, and Sunnydale seemed like one of these beautiful California towns — but with a twist. Sunnydale would be perfect if not for the little fact it was built over a hellmouth, meaning there was way more demonic and evil forces at work in the town than there should have been. Despite this, the town itself played a huge part in shaping the Buffy storylines and overall series direction and one thing that can be said for it is that it would never, ever be boring. Also, it seemed pretty relaxed with a bar like The Bronze to hangout at in order to try to forget the stresses of living in such a troubled town.

In most movies and series, Cape Cod is simply a vacation destination, but in Dawson’s Creek it was the hometown and major setting for all of Dawson, Joey, Jen and Pacey’s drama. Many wondered how those who lived in such a gorgeous place could have so many issues, and although there was a lot of infidelities, inappropriate teacher-student relationships and more romantic complications than could possibly fit into any small town, it was a lot easier to take in when it all happened in the gorgeous town of Capeside. Of course, if things ever did get boring there was always The Icehouse to go to or the halls of Capeside High School.

On the outside, Stars Hollow might seem like a sleepy town, but there is so much more to the beautiful Connecticut town. The town has all the excitement of a city, with way less of the noise and people. Those who are there know you, and there is everything you could ever need from a bakery to an antique shop and Le Chat Club which speaks for itself. While Stars Hollow doesn’t have any of the mystical creatures or strange happenings of any of the other towns on this list, there is never any shortage of something to do, and in down time there is always Luke’s Diner, which makes Stars Hollow somewhere viewers would actually like to live. 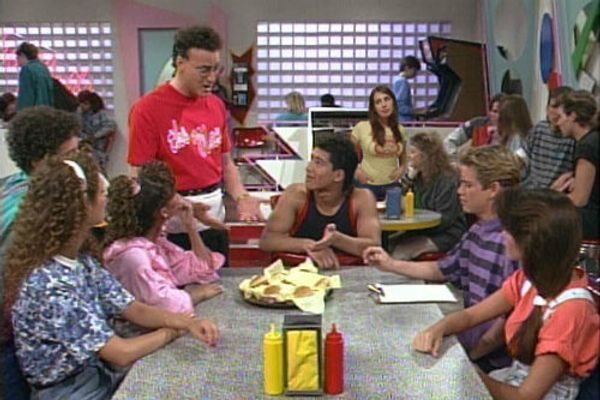