Ally McBeal was one of the most popular shows in the late ’90s. The critically acclaimed legal drama created by David E. Kelley was viewed as incredibly unique, eccentric, humorous and forward-thinking. Although it only ran for five seasons between 1997 and 2002, Ally McBeal made a huge impact on primetime television and drew in millions of viewers each week. It’s been 15 years since the show ended, so here’s a look at 11 things you didn’t know about Ally McBeal!

It would be hard to picture anyone except Calista Flockhart as Ally McBeal, but apparently, Bridget Fonda was David E. Kelley’s first choice! In an interview with the Calgary Sun, Fonda said she turned down the role to focus on her film career. “David sent the [Ally McBeal] script and offer to me through my agent. I refused to read the script for fear I might really like it. I’ve never wanted to do TV. I love feature films too much. I’m not kicking myself for having passed on ‘Ally McBeal,’ even though it’s a huge hit. I’ve been acting long enough to know it could have been a complete dud with me in it,” she said.

Fox approached David E. Kelley, who was fresh off creating the legal drama The Practice six months prior, to develop a show that would draw in a larger female demographic between the ages of 18 to 34 to tune in after Melrose Place. The network asked him to create a show about “young, ambitious, and sexually supercharged business executives” and gave him full creative control of the project. Kelley then drew on his former experiences as a lawyer to develop Ally McBeal, a show about attorneys.

David E. Kelley knew what he wanted when it came to the opening theme song of the show. He had his heart set on Vonda Shepard’s cover of the 1962 Bert Berns song, “Tell Him,” but Shepard and her manager wanted him to choose her original song, “Searching My Soul.” Eventually, Kelley changed his mind, but not after he sped up the song and cut it down to one minute.

In 1999 Fox created a half-hour version of Ally McBeal to boost syndication sales. Hour-long shows don’t do as well as half-hour sitcoms, so Kelley created a shortened version of the show and renamed it “Ally.” It was created from previous episodes of Ally McBeal, cut down to 30 minutes by eliminating all the courtroom scenes and adding in unused scenes. Sadly, the show did not do well. Less than half of Ally McBeal‘s regular audience tuned in, so it was cancelled after only 10 episodes.

7. How Lucy Liu Landed her Role

When Lucy Liu initially auditioned for a part on Ally McBeal, it was for the role of Nelle, but she didn’t get it. Kelley liked her so much he created the character of Ling Woo, but then she almost didn’t take it! “They came back a few weeks later with this guest-star role and at the same time I was being offered a play. The TV role was only eight days’ work. the play was running for three months and I wanted to do the play because it was more artistic. But my manager insisted I take Ally McBeal — she told me I was going to pass on the play that time and I was going to do this show, and that was that. Then, of course, it became such a part of the zeitgeist and changed my career,” she said.

Gil Bellows was cast as Billy Thomas, Ally’s ex-boyfriend-turned boss, but before he really locked down the role he had to read alongside Calista Flockhart to make sure the two had good chemistry. Little did the producers know that these two actors had previously worked together! “I knew Calista from New York and knew she was a great actress. They said they’d like to see us in a room together, so we met up in some room, I think on 53rd Street, and we had a scene together and then just sat side by side and talked a little bit,” said Bellows in an interview with Movie Web. The producers shipped the tape off to L.A. and put Bellows on a plane to L.A. the next day to shoot the pilot. He signed a one year contract that eventually turned into three!

The concept of the dancing baby had been around for a long time before it was used in Ally McBeal. It was created by Michael Girard to show off his animation software product, Kinetix Character Studio, and when the co-executive producer, Jeffrey Kramer, saw it he knew it would be perfect for the show. He wanted to use the dancing baby to explore McBeal’s ticking biological clock and Ally McBeal was often applauded for using dramatic fantasy sequences. “We use fantasy elements in the show, and what better biological clock than to see this little baby who comes in as an apparition and haunts her,” said Kramer.

Lead actress Calista Flockhart was the one who caught a lot of backlash for seemingly not eating enough and looking too thin, but surprisingly it was another actress who actually quit for that exact reasons. In an interview with Us Weekly, Courtney Thorne-Smith, who played the role of Georgia Thomas, said she quit the show after she pushed herself too hard to look thin on the show. “I started undereating, overexercising, pushing myself too hard, and brutalizing my immune system. The amount of time I spent thinking about food and being upset about my body was insane,” she said. Her breaking point was when she had to do a nude scene. “I ate fruit all week just to try to be really lean by Friday. I remember Gil [Bellows, who played her hubby, Billy] said, ‘You look good,’ and I was like, ‘I’d better. I haven’t had a piece of chicken in five days.’ There was something terribly wrong with that.”

Now a prominent Hollywood actor, Robert Downey Jr. joined the cast of Ally McBeal in season 4 as a fellow lawyer, Larry Paul. This role came during a time when his career was arguably at its lowest, but the producers wanted his credentials as a Golden Globe winner to bring up their sagging ratings. Unfortunately, he ended up being fired from the show after he was arrested on a drug-related charge. His character was introduced as a love interest for Ally and was supposed to be the person she married in the season finale. The episode titled “The Wedding” was kept even though Downey could no longer be present and Kelley was forced to re-write the ending. The rewritten version introduced Josh Groban and gave him a much-needed platform to get his name out. His role in that episode led to his first three interviews ever!

It’s very unusual for a television writer to pen an entire series, but for show creator David E. Kelley it’s ‘normal.’ Back when Ally McBeal was a new series, he easily wrote all 23 episodes of a season himself while also writing nearly all the episodes of The Practice. This is a pretty incredible accomplishment considering each script is about 60 pages long. Each episode took about four days to write but was sometimes produced in two to three days if there were strict time constraints. Kelley wrote all his scripts on a yellow legal pad, a practice he’s followed since 1983 when he was a Boston lawyer.

Lisa Nicole Carson had a main role on Ally McBeal for the first four seasons as Renee Raddick but unfortunately wasn’t asked to return to the show for season 5 after she had a mental breakdown in a hotel room and was later diagnosed with bipolar disorder. She was put on medication after being hospitalized for several weeks and completed her contract for season 4, but that was it. “Everybody on the show was wonderful to me, but my contract wasn’t renewed for the final season. Nobody gave me an explanation, but I assumed it had to do with what had happened. I was devastated,” she said in an interview with Essence. 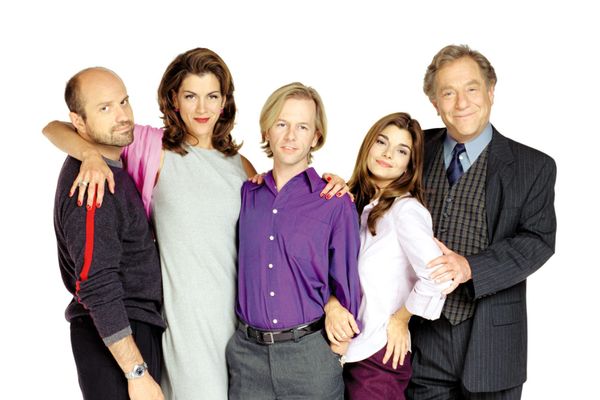 Cast Of Just Shoot Me!: How Much Are They Worth Now?