If you feel like you know a lot about Ben Affleck, there’s a reason for that. The famous actor has been in the media spotlight hard and heavy since his first breakout roles, even prompting him to take a two-year break from acting because of worries that there was an oversaturation of his image in the public eye. Frankly, he didn’t want fans to get sick of him. His roles, relationships, and every move seem to be fodder for headlines, which might make you think that you know everything there is to know about Ben. Don’t bet on it! Check out these 11 things you didn’t know about Ben Affleck.

Everyone knows that Hollywood stars bring in big bucks (like, REALLY big bucks), but are you aware of just how much Ben Affleck is currently worth? Apparently his hit-or-miss roles haven’t hurt his income any. According to Celebrity Net Worth, Ben Affleck is currently worth somewhere in the area of $105 million dollars (US). Bank, bank, bank, Ben!

If you’ve ever thought you spotted ink on Ben Affleck, you’re quite right. But is his tattoo a…dolphin? Yup! On his right hip, above his butt, he has a black dolphin tattooed prominently. It seems like a strange choice when it comes to both subject matter and location, but apparently it’s not a simple, straightforward inking. Affleck claims that the dolphin is a cover-up of another earlier tattoo, one which was off his high-school sweetheart’s name. Covering up an old tattoo of your ex’s name doesn’t seem so strange…but still, why the dolphin???

9. Acting Beginning With a Voyage of Fields of Mermaids

Fans and audiences first started taking notice of Ben Affleck when he starred in roles such as Dazed and Confused’s brutal bully O’Banion and in Kevin Smith’s cult classic Chasing Amy, but the actor began with much more humble roles and appearances. Wanting to act from the time he was a boy, Ben Affleck’s first role was in a Burger King commercial. Not quite his ticket to immediate fame, he went on to star in the PBS series Voyage of the Mimi before growing up a bit and landing a role as an extra with best bud Matt Damon as extras in 1989’s Field of Dreams, which starred Kevin Costner as a baseball-diamond-building farmer. Another not-so-memorable appearance came for the young actor the next year in 1990 when he was spotted in a prop photo used in Mermaids starring Cher and Winona Ryder. Have some fun re-watching each and see if you can spot him!

Most fans are aware that Ben Affleck and Matt Damon are best friends and have been since they were kids (if you didn’t know that, where the heck have you been for the past decade or so?!). But did you know that they even once shared a bank account? When the two young actors were just starting out and often traveling into the city for auditions in the hopes of landing their big break, Ben and Matt set up and shared a bank account to stash the money they made to pay for their travels. It certainly paid off when they finally both landed an onscreen job together in a T.J. Maxx commercial. Soon after, they both nabbed roles in the 1992 movie School Ties and it was just a hop, skip, and a jump (plus a heck of a lot of good luck and talent) and the two sold their script for Good Will Hunting for $600,000. One can only assume by that time they were opening their own bank accounts, ready for the money to roll in!

Although his teachers described Ben Affleck as smart and extremely bright, school just wasn’t for him. His major issue was merely keeping focused, which isn’t surprising considering some of the action-packed roles he’s now known to take on. He did, however, attempt higher education and attended both the University of Vermont and Occidental College where he studied Middle Eastern studies, but only lasted one semester at Vermont and one year at Occidental College. Luckily for him, a successful acting career was waiting for him just ahead.

Ben Affleck’s father, Timothy Affleck, held a number of jobs while Ben was growing up. He was an actor and stage manager for the Theater Company of Boston in the 1960s and worked with famous names including Dustin Hoffman, Robert Duvall, Blythe Danner (a.k.a. Gwyneth Paltrow’s mom), Jon Voight (a.k.a. Angelina Jolie’s dad), and James Woods. It’s obvious where Ben Affleck might have first picked up the acting bug. But his father wasn’t always an actor and while Ben was a kid, his dad worked as a mechanic, a carpenter, an electrician, a bartender, and even a bookie. Although Ben describes his father as a very smart guy, battles with alcoholism were an issue for Timothy and when his sons were teenagers, he successfully completed a rehab program and eventually became an addictions counsellor himself. But it was another of Timothy’s jobs that would end up being a significant part in one of Ben’s biggest successes. For a period of time, Ben Affleck’s father worked as a janitor at Harvard. This was the inspiration for the main character’s job at MIT in Ben’s Oscar-winning, career-making film Good Will Hunting.

Were you aware that Ben Affleck speaks Spanish? Si, si, he does indeed. A teenaged Ben along with his brother spent a year in Mexico where they both learned to speak Spanish. Although he admits he’s not fully fluent, he can still manage a conversation while speaking Spanish and even used his bilingual skills while promoting his role as Latino CIA Agent Tony Mendez in the movie Argo. Here’s to hoping he makes more use of his snazzy Spanish skills in future roles and gets those R’s rolling.

Ben Affleck’s younger brother Casey Affleck is also an actor who has appeared in films like 1999’s American Pie and 2001’s Ocean’s Eleven — although this is something you may already know. But did you know that Casey was married to Summer Phoenix who is the youngest sister of actor Joaquin Phoenix and the late River Phoenix? Summer is an actor herself and has appeared in shows when she was younger like Murder She Wrote and Growing Pains.

In 2001, Ben Affleck decided to be proactive with his issues concerning alcohol and voluntarily entered the Promises Rehabilitation Center in Malibu, California. Although Affleck had hoped to keep his stay private, it was soon reported that he was there and that it was in fact Charlie Sheen, another actor who has famously battled with addiction, who drove him to the rehabilitation center. Ben’s effort with his addiction issues appears to have been successful, although in 2008 he remained stoic and straightforward about the situation. “My father was an alcoholic and there was a cycle of addiction in my family … It colors who you are and becomes part of you. I had my issues and went to rehab,” he told Mail Online.

2. Three Superheroes in One

Ben Affleck jumped into his first superhero suit back in 2003 when he tackled the role of Matt Murdock’s Daredevil. Starring alongside his future wife (and now soon-to-be ex-wife) Jennifer Garner who played Elektra, the movie wasn’t exactly a success. Moving along to 2006’s Hollywoodland, Ben Affleck played actor George Reeves who was the star of the 1950’s television show Adventures of Superman. In a role that explored a fictionalized version of the events surrounding the death of the real-life man who died in what was deemed a suicide, but many believed it was in fact murder or an accidental shooting, Ben appeared as the man of steel himself. Not quite finished with the superhero genre yet, Ben Affleck is set to become Batman in 2016’s Batman v Superman: Dawn of Justice, which will also feature Henry Cavill, Amy Adams, Jesse Eisenberg, Diane Lane, Laurence Fishburne, Jeremy Irons, Holly Hunter, and Gal Gadot. This makes Ben Affleck the first actor who has played both Batman and Superman in separate movies, not to mention the trifecta with Daredevil thrown in for good measure.

Most people will immediately recognize the name Ben Affleck, but what about Benjamin Géza Affleck-Boldt? That is in fact Ben Affleck’s full name. His father is Timothy Byers Affleck and his mother’s name before marriage was Christopher “Chris” Anne Boldt. Ben’s parents combined and hyphenated their last names to give Ben his and was given the middle name Géza after a Hungarian friend of his parents who had survived the Holocaust. A lovely tribute indeed now carried on by a very famous man. 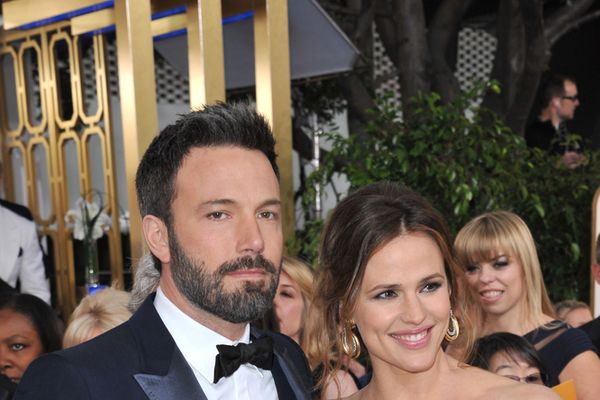