The Full House series sequel, Fuller House, is all the rage in the world of television. Fans are nervous and excited about the potential of the show–will it flop or fly? Because of the hoopla surrounding the continuation of the Tanner family legacy, there has been a renewed interest in the 80s-90s classic. Consider 11 things about Full House that even the biggest of fans may not know.

Did you know: The producers of Full House didn’t want fans to know that Michelle was played by twins, so for the first seven seasons, they credited Mary Kate and Ashley Olsen as Mary-Kate Ashley Olsen. It is true that the twins’ mother considered pulling the girls after the first season, but more money was offered, and the popularity was presenting new opportunities for the toddlers. In the eighth, and final season of Full House on ABC, the twins were finally credited as individuals: Mary Kate Olsen and Ashley Olsen.

Everyone is well aware that the Tanners lived in San Francisco. They were fans of the SF Giants, the Golden State Warriors and taking all of their friends to Fisherman’s Wharf. In reality, the show was shot in Los Angeles, and the only two times footage was gathered from San Francisco was for the opening, and the episode entitled, “Comet’s Excellent Adventure.”During the episode, Michelle takes Comet, the family’s golden retriever, for a walk, and he gets off his leash. The rest of the episode includes the Tanner girls chasing Comet throughout the city of San Francisco.

The Tanner family home is located on 1709 Broderick St. in San Francisco, and is historically known as a Painted Lady. Only a few of the homes in the neighborhood are honored with this distinction. The owner of the Full House house, sold the property in 2014 for an impressive $3.1 million, down from the original $4 million asking price. This was a hefty profit for the owner, who purchased the home for the bargain price of $65,000 in 1975. The location is still incredibly popular with tourists, some of whom are under the impression that they actually shot at this location. The inside looks nothing like the studio set.

8. Why The Show Ended

The show was officially, and unexpectedly cancelled by ABC in 1995, however, the new WB network picked up the show to help bolster its own audience. The idea was to add fan favorites like Full House to the mix, in order to introduce new shows to build up the network. The cast members favored the continuation of the show for a short while, but eventually, Candace Cameron (D.J. Tanner) suggested she’d rather focus on the pursuit of a college education. The plan was to have her come back from time to time in the story line, visiting from college. Sadly, cast interest began to wane, and they all agreed that it was a good time to move on.

In order to keep the twins focused on the job at hand, the writers, producers and directors decided they would have Mary Kate Olsen perform the comedy Michelle, and Ashley perform the drama Michelle. As is noticed throughout the series, Mary Kate is left handed, and Ashley is right handed, which made the character of Michelle an ambidextrous genius. Sadly, it sounds as if neither twin was able to come to terms for appearances on Netflix’s Fuller House, and won’t be appearing on the show. Perhaps producers could go after their younger sister, Elizabeth, who still has that “look,” and impressive acting chops.

Remember the first season of Full House, when Uncle Jesse was named Jesse Cochran? John Stamos asked writers to change his last name to Katsopolis so they could dig more into his Greek heritage for story elements. The move was easy for the writers, as they wrote the name “Cochran” into the second season as Jesse’s stage name–a name that sounded more rock ‘n’ roll. Adding Katsopolis to the fabric of Full House took the show to another level, and allowed for one of the greatest episodes in show history: Jesse’s cousin, Stavros, visited from Greece, allowing for Stamos to play a double role.

In the original Full House pilot–which never aired–John Posey was cast in the role of Danny Tanner. Because most pilots for sitcoms were then done as presentations, and not actual episodes of the show, it wasn’t uncommon to see roles recast based on what the producers desired. Eventually, the role came down to Paul Reiser and Bob Saget. Paul opted for the NBC sitcom, My Two Dads, and the rest is history. The role couldn’t have been cast better than Bob Saget, who mastered the neuroses of Danny Tanner, and his clean-freak quirks over the 8 years.

4. Three Actors Appeared in Every Episode

According to the show’s official website, there were only three actors who appeared in every episode–a noteworthy feat. John Stamos, Dave Coulier and Jodie Sweetin were credited with appearances in every episode. The eight seasons produced 192 episodes–193 if the pilot is included. Half of the seasons ended in two-part episodes, including the makeshift series finale, “Michelle Rides Again.”

Did you ever notice that there were two staircases in the Tanner household that led to the same location upstairs? Whether someone took the staircase out of the living room, or trekked up the back staircase located in the kitchen, it would always spill characters into the same hallway where several of the bedrooms and bathroom were located. For fans who thought they actually shot in the house represented in the show opening, this should have been the first clue that it was a studio set.

The show struggled to gain a solid following in its first season, and the producers had to play hardball with the network. According to stories that have circulated through the inner workings of Hollywood, producers believed, and rightly so, as the girls got older, the fan base would grow and become more loyal. Additionally, they thought they could flesh out the adult characters more, give them more personal story lines and engage an adult audience. They were right. It worked splendidly for all parties involved, including ABC.

1. Pamela Tanner Was Killed By a Drunk Driver

Over the years there were several references to Pamela Tanner, whose story line was introduced through various methods. She was portrayed in a home video by actress, Christine Houser, in the episode, “Goodbye Mr. Bear.” She was also the subject of conversation in the two-part season finale, “Luck Be a Lady,” when Jesse and Danny recounted the relationship. Danny and Pam eloped at a young age, frustrating Jesse to the point of beating up his new brother-in-law, who was seven years older. Jesse adored his sister, and that’s why he insisted to move in and help Danny raise the girls. In the final series episode, “Michelle Rides Again, Pt. 2” it is revealed that Pam was killed by a drunk driver while Michelle was still an infant. 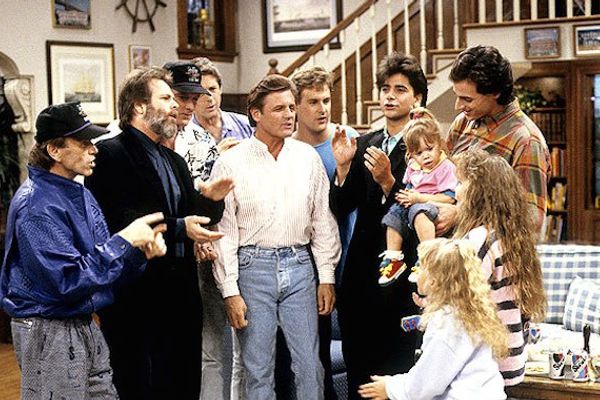