Sharon Osbourne is widely recognized as the long-time wife of legendary rock star Ozzy Osbourne, but she’s also built up her own successful career as a television host, media personality, author, businesswoman, promoter and music manager. She’s currently co-hosting a successful talk show known as The Talk. Sharon’s full name is Sharon Rachel Osbourne, formerly Sharon Rachel Arden, and according to The Sunday Times, she’s one of the top 100 richest women in Britain with an estimated net worth around $22o million! Despite being candidly open throughout her entire life, authoring numerous memoirs and opening her home to reality television, there’s still a lot fans don’t know her: Here’s 11 things you probably didn’t know about Sharon Osbourne:

Sharon was born in Brixton, London in 1952 to parents Don Arden and Hope Shaw. Her mother was a dancer and her father was a music manager and concert producer, so Sharon grew up engulfed in the world of rock n’ roll. Since her rise to fame, Sharon has been candid about her difficult childhood. Her dad suffered from alcoholism and was often violent. He was reportedly extremely bad with finances so her family was often struggling to get by. Their finances were often up and down and, when he had money, he’d lend it out to his various mistresses. Sharon dropped out of school when she was 15 and began working with her father at his music managing business, first as a receptionist and later moved up to promotions. Eventually, Sharon took over the management of Ozzy from her father after he was kicked out of Black Sabbath. When she took over Ozzy’s management, it caused a rift between her and her father that lasted more than 20 years.

Sharon’s entire life changed when her father began managing the heavy metal group Black Sabbath in 1976, but in 1979 Ozzy was kicked out of the band due to his substance abuse problems. Sharon went against her father, took Ozzy under her wing and became his new manager. She’s now credited for reviving his entire career turning him into a solo artist. Despite their dysfunctional marriage, these two make quite the successful business team! She put together a new back-up band made up of Randy Rhoads, Bob Daisley and Lee Kerslake for the recording of The Blizzard of Ozz and soon after Ozzy began touring and selling millions of records. In 1996, Sharon created Ozzfest which is now a hugely successful annual festival tour that travels throughout the U.S. with several heavy metal and rock bands. The idea for the festival came when Sharon approached Lollapalooza to market Ozzy as a performer, but they rejected her stating he was too “uncool” and drugged up, so she decided to create her own festival. After the success she experienced managing Ozzy’s career, Sharon created Sharon Osbourne Management and began managing other musical acts.

Now 63-years-old, when Sharon first met Ozzy she was only 18-years-old and he was already married with two children. She started dating him in 1979 and the two married in Maui, Hawaii on July 4th in 1982. The couple now shares three children, the eldest is Aimee, who has chosen to stay out of the limelight, and Jack and Kelly. Sharon’s marriage to Ozzy was rocky from the beginning as the two struggled with serious matters like substance abuse and intense domestic fights. In 1989 Ozzy was arrested for attempted murder after he tried to strangle Sharon while he was under the influence of drugs. He spent several months in a health facility afterwards and she decided not to press charges. For years their marriage was plagued with demons and Sharon has described herself as “a beaten woman” like when Ozzy once knocked out her front teeth. She’s retaliated and admitted to throwing a full bottle of scotch at his head while he’s also tried to run her down in his car. She quit drinking after waking up one morning with no memory of what happened, and looking in the mirror to discover she had bruises all over her body. “There’s a big difference in being an alcoholic, where you physically need it, and somebody who just drinks because that’s what you do. And I’m not an addict, so it was easy for me to stop.” Ozzy on the other hand has struggled with his sobriety throughout their marriage.

Right before the second season of MTV’s The Osbournes began filming in 2003, Sharon found out she had colon cancer. Instead of calling off the show and dealing with the matter privately, she allowed cameras to film her treatment. Even though her cancer was originally found in her colon it was also detected in one of her lymph nodes which placed her at stage 3 of colon cancer. She ended up having surgery removing a foot-long section of her colon and eventually entered into remission. Once she became cancer-free she established the Sharon Osbourne Colon Cancer Foundation and continued on with the show until 2005. In addition to surviving cancer, Sharon told Glamour magazine that she’s battled depression for nearly 16 years. “Some days are better than others, and some days you feel like you just want to pull the sheets over your head and just stay in that bed and not do a damn thing — except rot.” She’s also admitted to having extensive cosmetic surgery, weight loss surgery and in 2012 underwent a double mastectomy after learning she had a gene that increases the risk of developing breast cancer.

7. Estranged Relationship with her Father

Sharon’s relationship with her father took a wrong turn when she decided to take over Ozzy’s management right from under his nose. She has stated that she decided to branch off from her father when she realized he was having an affair which also revealed an apparent string of lies. In her memoir, Sharon recounts her father’s various manipulations over the years: threatening to kill her, robbing her, inviting Ozzy to a pub and telling him that she was “sexually deviant,” trying to convince Ozzy Sharon had tried to seduce him, and he even tricked Sharon into signing a tax bill that lead to her being invoiced for $2.5 million in 2003. She told her grandchildren that their grandfather was dead, and they even met him one time without knowing! They saw him for the first time while walking down the street in L.A. — she began yelling obscene things at him and, when her children asked who she was shouting at, she lied and told them he was Tony Curtis. In 2001 she was quoted stating that her father had never met her children and never would, but that same year their reconciliation was filmed on The Osbournes. He was later diagnosed with Alzheimer’s and she paid for his healthcare until he died in 2007. As of 2013 she also had a strained relationship with her brother, David.

Sharon describes her mother as cold and distant. Like her father, her mother was involved in showbiz so neither one of her parents were regularly home. Sharon and her older brother David spent a lot of time competing for their parents’ attention which resulted in their strained relationship. Her mother took a turn for the worse after suffering a violent head injury in a car accident. Sharon suspects this changed her, making her even stranger and colder. She recounts one occasion when she visited her mother and her mother’s dog attacked her. Sharon was pregnant at the time and lost the baby. She said her mother waited a long time before doing anything about her dogs attacking her. In 1999 her mother died — her brother David called her to deliver the news and Sharon wrote that she said, “Oh, what a shame,” and hung up the phone. That was that.

Sharon might have started out as the wife and manager of Ozzy Osbourne, but now she’s credited as a successful businesswoman. Not only did Sharon create the deal that sparked her family’s MTV reality show (one of the first reality shows on air), The Osbournes, she also branched off to start her own daytime talk show called The Sharon Osbourne Show. It only lasted for one year from 2003 until 2004 before it was cancelled, but it was later revived in Great Britain. Sharon received two Emmy nominations for her producing role on The Osbournes and recently won an Emmy for her current show, The Talk. Sharon has become a prominent media personality and host with roles on The X Factor as a judge from 2004 to 2007 and on America’s Got Talent. She hosted Rock of Love: Charm School, appeared on The Celebrity Apprentice and released four books: Extreme: My Autobiography, Unbreakable, Survivor and Revenge. In 2010 she took another stab at daytime television by co-hosting CBS’s The Talk alongside Sara Gilbert, Julie Chen and Aisha Tyler. She’s also managed musical talent like Billy Corgan, her daughter Kelly, Lita Ford and The Smashing Pumpkins.

Despite her success as a musical manager and becoming a popular media personality, she’s had her fair share of mess-ups. Sharon was at one point the manager for Smashing Pumpkins, and the exact duration of her management is up for debate, but one thing is for sure, it was short lived. Reportedly, tensions began between Pumpkins frontman Billy Corgan after Sharon denied him to wear a dress in one of their music videos and Corgan responded by giving her the silent treatment. Soon after Sharon sent out a press release which stated she would be leaving her position as manager for “medical reasons” …and cited these medical reasons as “Billy Corgan is making me sick.” Their feud has since been squashed and Sharon has admitted fault in her behavior: “I shouldn’t have said it, but I like to be honest, and after all these years I can’t be bothered being politically correct.” She’s also been accused of poor behavior at an Iron Maiden performance at Ozzfest. Sharon was accused of having audience members throw eggs, bottle caps and ice on stage and during their performance the PA system was turned off for three songs, cutting power to Dickinson’s microphone and the band’s instruments. Sharon claimed the acts were in retaliation against lead singer Bruce Dickinson who slammed reality television, which she saw as an attack on Ozzy Osbourne.

When she was only 17-years-old she had an abortion. She has since stated it was the biggest mistake of her life and, according to her, she was heavily pressured by her mother to have the procedure. She opened up about the experience in an interview and said, “I went alone. I was terrified. It was full of other young girls, and we were all terrified and looking at each other and nobody was saying a bloody word. I howled my way through it, and it was horrible. I would never recommend it to anyone because it comes back to haunt you. When I tried to have children, I lost three — I think it was because something had happened to my cervix during the abortion.”

The whole world knows that Ozzy has been unfaithful to Sharon in the past. She’s confirmed rumors that he slept with their nannies and, most recently, their family hairstylist. However, some people might not know that Sharon once had an affair with Randy Rhoads, a guitarist in Ozzy’s band.

In April 2016, Sharon Osbourne dropped a huge bomb regarding her sexuality. Sharon revealed she is bisexual during an episode of The Talk. She said, “I always think everybody is gay — so am I. I am not a little bit gay, I am extremely interested in the fact of what I missed out on. But it is too late now.” 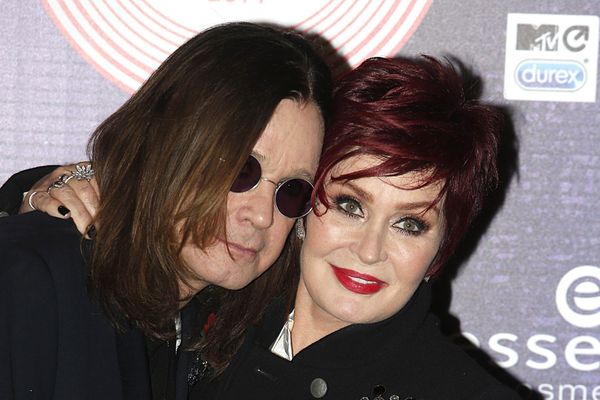