12 Celebrities Who Are Super Hot With Beards

If you were given five seconds to name three men you know personally who have beards, we’d bet a good chunk of money that you could do it. We’ll give you a hand. Does your co-worker have a beard? Your S.O.? Your brother or dad? How about your mail carrier or the barista at your local Starbucks? They ALL have beards, don’t they? That’s because, while the current revival and undeniable popularity of beards may have at first seemed like a temporary hipster focused trend that would eventually die out as millennials got older, at this point it’s pretty safe to say that the stylish whiskers adorning so many fellas faces aren’t likely to disappear any time soon. While those who love a smooth faced man might be slightly disappointed by a little additional facial hair on their favorite actors and musicians, those who are attracted to a man with a mighty stubble will definitely want to check out this list of 12 celebrities who are super hot with beards!

Jamie Dornan’s unforgettable starring role in 50 Shades of Grey (and his performance in its sequel, Fifty Shades Darker, which was arguably even hotter) will always have plenty of people seeing the actor as a body-tingling sex symbol no matter how he chooses to style himself. But when the clean shaven Christian Grey (or, rather, the lovable Irish dude who plays our favorite dominating boss-like man) lets his beard grow out…my, oh my! Whether it’s a slight stubble or a full-on beard worthy of any wilderness loving lumberjack, facial hair transforms this fella from a sophisticated businessman-like figure into a totally rugged version of himself. And we definitely like it! Now, we just have to prepare ourselves for his return as Mr. Grey in 2018’s Fifty Shades Freed.

Joe Manganiello is absolutely sizzling and downright smoking hot no matter what he does − his role in Magic Mike XXL is more than enough proof of that fact (could you even handle the epic amazing gas station strip scene?!) − but when he opts to grow a beard, the man sets …things …on …FIRE! Choosing to skip the Just for Men touch up, Sofía Vergara’s lucky hubby sports particularly sexy salt & pepper facial hair that mixes his naturally dark mane with patches of sophisticated silver throughout. Another man who rotates between a slight stubble and a fuller beard, either way Joe goes is 100 percent fine by us. Appearing next as Slade Wilson, AKA Deathstroke, in the upcoming Batman movie, may we suggest a beard for this surely striking character? Let’s make this happen!

Idris Elba is another man who can seemingly do no wrong when it comes to his incredibly arresting appearance. He’s also another fella who can pull off the salt & pepper look with a kind of chic sexiness that is almost mind-boggling. Occasionally swapping a full beard that caresses his entire (chiselled) jaw for a more trimmed down goatee that accentuates his luscious lips, only he could still pull off the (sometimes hated, possibly dated) devilish shave. Frankly, he’s so sublimely suave, it’s no wonder there have been rampant rumors around him when it comes to the possibility of Elba stepping into the role of the next James Bond. He certainly gets our vote for (a bearded) 007. Seriously, throw in the English accent and this guy is almost too sexy to handle and would make the ideal lady-seducing super spy.

Once you go Wolverine, you never go back. At least that certainly seems to be the case when it comes to X-Men star and fan favorite Hugh Jackman. The Australian actor may slay a clean cut look while hosting the Tony Awards (which he’s done four times) or even the Academy Awards (which he’s only hosted once, but come on, that’s still pretty darn impressive), but more often than not these days when he’s on screen, the fans get what they really want, and that’s Hugh Jackson with a whole lot of facial hair. Honestly, would you want to see a hairless wolverine? While Hugh Jackman may have put his beloved Wolverine character behind him now that he’s finished with Logan, we can only hope that his future roles (including The Front Runner and The Greatest Showman, which are both in pre- and post-production respectively) take advantage of his equally beloved beard.

Thirty-eight-year-old Jason Momoa may be prepping to win us over as the brand new Arthur Curry, AKA Aquaman and Justice League member, but we’ll still always & forever remember him as the Game of Thrones’ horse riding, Khaleesi loving, eye makeup wearing Khal Drogo. Both parts required the actor to keep a lengthy, thick, and impressively groomed beard, and for that, we’re just so wildly thankful. We can only hope that in the future, he’ll continue to pick up roles that prevent him from ever taking a razor to his drool-worthy hair covered face.

Ryan Gosling may have initially built his career on his harmless boy next door charm (and his fans are certainly all about crushing hard on that particular brand of boy next door charm), but that doesn’t mean he can’t pull off one heck of a beard. From a slight shadow shading his sharp facial features to the bushy blonde beard, fans can’t help but crush on this actor whether he’s fully bearded or completely baby faced. Honestly, would that classic kiss with Rachel McAdams’ character Allie have been so memorable if Noah (AKA Ryan Gosling) hadn’t been flashing that super sexy facial hair? We think not and we’re sure you’ll agree.

Another famous Canadian Ryan actor, Ryan Reynolds (who, admittedly, is often and hilariously mistaken for Ryan Gosling) is another Hollywood celeb who likes to swap a clean cut look for a bearded style whenever the mood strikes or whenever a movie role warrants it. Mostly opting for facial fuzz that’s usually one or two days worth of growth, all he needs to do is add one of his fave hats and his thick rimmed black glasses and you have a look that’s ready to be snapped by the paps. Though we’re going to have to suggest that he give the beard and slicked back mullet a hard pass.

In his retro 1960s Mad Men mode, we were all about Jon Hamm’s smooth skin and slick suit-centered style. But when it comes to modern day IRL, we love (LOVE!) when this Hollywood hottie opts for a beard. Usually keeping his facial hair relatively short and neatly trimmed up, that’s probably a necessity since it’s obviously so wildly full. Seriously, if he grew out his beard, he could rival any Merlin-like wizard or medieval king. Unfortunately, he could also look like a freakazoid criminal who keeps a group of four mole women trapped in an underground bunker in the middle of Indiana as part of a twisted doomsday cult.

You can never quite predict what Kanye West will do next, for better or worse, and that includes every single aspect of his style. Whether it’s creating a new collection for his Yeezy fashion brand or randomly dying his hair bright yellow, Kanye is just as willing to experiment with his look as he is willing to experiment with his various artistic endeavors. That’s why it’s no surprise that the rapper likes to switch things up when it comes to facial hair. Never one for a full and/or long beard, he’ll occasionally try out a few days growth or a little stubble here and there, though he usually takes on a goatee when he’s in the mood for a little bearded charm.

Tom Hardy is certainly an uber famous fella who seems to prefer to have a beard than to go clean shaven (even though, like every other man on this list, he’s just as crush worthy with or without one). Not only growing out his facial hair for various movie roles (often because it suits the ruff and gruff parts he tackles), he often sports a rather rugged beard while living life off screen. Apparently able to develop quite the successfully bushy scruff, Hardy’s reddish blond beard has mostly certainly won fans over.

David Beckham has changed up his look plenty of times over the years, trying out longer hair as well as a shaved head, stellar style, and adding more tattoos to his skin than you could possibly imagine (we’re pretty sure most of his rock hard bod is covered with ink at this point). Growing facial hair is no exception. Trying out a longer version and a shadow of stubble in the past, these days the soccer player mostly opts for a few days growth and that goes for any circumstance he’s facing, whether it’s enjoying a little morning down time (and “shower”) in a natural body of water, or visiting Buckingham Palace with his mom and his beloved daughter, Harper, on the lucky little girl’s sixth birthday.

Paul Rudd is one of those dude’s who appears to never age. Seriously, it’s a little unnerving though totally awesome. Though he’s currently 48-years-old, he pretty much looks exactly the same way he did when he co-starred with Alicia Silverstone in Clueless way back in 1995 and tried out an itty bitty Friedrich Nietzsche inspired goatee. Maybe that’s why he has been opting for a full-on beard lately, to help himself look a little older. Frankly, it’s not really working, but it certainly is adding an entirely new level to his always adorable good looks. With facial hair that’s just as thick, dark, and gorgeous as his luscious head of wonderfully wavy hair, we certainly can’t complain about Paul Rudd’s choice to try out a beard. 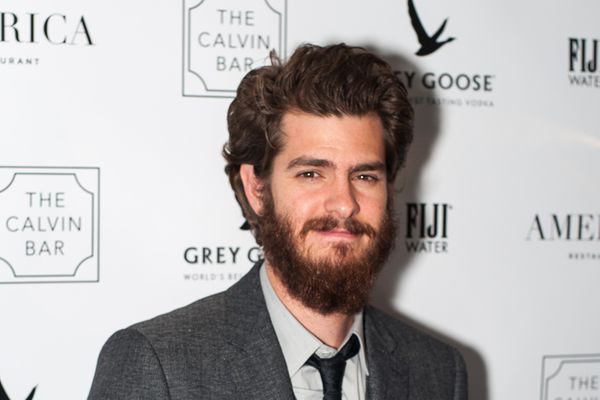 The 7 Most Disgusting Celebrity Beards