Jennifer Aniston and Justin Theroux seemed like a pretty rock-solid couple. They were together for years before they finally tied the knot, but then suddenly announced their separation immediately following Valentine’s Day. While their separation might come as a surprise to many people, there were some hints that showed this breakup was a long time coming. Here are 12 signs that Jennifer Aniston and Justin Theroux’s relationship was headed for splitsville:

12. He Reportedly Had a Live-In Girlfriend When They Started Dating

Jen and Justin’s relationship reportedly began while they were filming Wanderlust in the fall of 2010 while he was still living with his girlfriend of 14 years, Heidi Bivens. Sources say he abruptly ended things with Heidi in March 2011. A couple of months later Biven found out about his relationship with Jen when the two went public with their romance.

11. They Moved in Together Really Quickly

Following his split from Heidi Bivens in March 2011, he and the Friends star moved in together that June in New York City and began wearing matching rings. Jen didn’t last long living in the Big Apple though. By March 2012, she had already moved back to L.A. She claimed that living in New York felt like living “in a fishbowl” because of the paparazzi.

10. He Wasn’t the Marrying Type

When Theroux got together with Aniston, sources close to him and his ex Heidi Bivens didn’t see it lasting. “Justin will never marry her,” a friend told InTouch Weekly. “He’s not the marrying type – as you can see from the 14-year relationship he was in that didn’t end in marriage.”

A source told InTouch Weekly that Jen and Justin were just too different to make it work long-term. “She’s all about Malibu and shopping and trying to stay young while Justin is about being an artist,” a friend said. He is so dedicated to his craft that he skipped his audition for Friends, claiming that he would “hang himself” if he got tied into a seven-year contract. This is the very show that made Jen a household name and a millionaire. The friend also mentioned that Justin loves dive bars, but Jen doesn’t seem like the type to want to slum it.

When the Horrible Bosses actress first met the actor/writer, it wasn’t love at first sight. In fact, she thought he was really “dark” and could be a “serial killer.” In an interview with PopSugar, Aniston said: “I met Justin about five years ago and I thought he was so sweet and very nice. But I remember thinking he was very dark. At first you think he could be like a serial killer, but he’s (actually) the nicest person in the world.”

7. The Marriage Was On Hold Indefinitely

Even though Theroux proposed to Aniston in August 2012, it took three years for the couple to finally tie the knot, and in 2013, sources told People that the marriage was on hold – indefinitely. The source said the reason for this was that both of their schedules were packed and construction on their Bel-Air mansion had gotten in the way. They were apparently still trying to “figure out a way to create a life that makes them both happy.”

One the hold ups for the wedding may have been the prenup negotiations. A source told Us Weekly that the couple has an “ironclad prenup,” but “the prenup talks before the marriage were long and intense.” Jen has definitely made significantly more than Justin thanks to her contracts with Aveeno and Smart Water and her hairline, Living Proof, and of course her Friends’ fortune.

5. Honeymooned with Other Couples

After finally tying the knot in August 2015, the newly married couple went on their honeymoon in Bora Bora, but they weren’t alone! They chose to bring some friends on the trip. Courteney Cox, Jason Bateman and his wife Amanda Anka and their two children also joined them on their Polynesian honeymoon.

For years, The Leftovers star and the A-list actress have been living separately on two different coasts – he has an apartment in New York City while she lives in L.A. A source told Entertainment Tonight that one of the major factors in their breakup was their disagreement about where they should live. While Theroux initially tried to make it work by moving to L.A. after Aniston left New York City, he was the one doing the bicoastal thing and she wasn’t. She wouldn’t even stay at his Greenwich Village pad and would instead stay at a luxury hotel.

3. Their Last Vacation Together Was with Other Couples

The former couple wasn’t alone when they went on vacation in Los Cabos in a last ditch effort to save their marriage this past Christmas. Jason Bateman and his wife Amanda Anka where there too – and Amanda was the one who had to convince Justin to come! “Jason Bateman’s wife convinced Justin to go to Cabo. She has been the mediator in recent months, trying to get Jen and Justin to work through their problems and save their marriage,” a source told Us Weekly. Unfortunately, Jen and Justin didn’t spend much time together while on vacation. “The guys and girls hung out separately in Mexico,” the source said. “It didn’t work.”

2. The Architectural Digest Shoot of Their Bel-Air Home

Although they called it quits on February 15, their Bel-Air home, which was recently renovated, is on the cover of Architectural Digest in March. Theroux wasn’t interviewed for the piece, Aniston was, and he can only be seen in one photo where it looks like he is leaving the house, looking almost as if the two had just had a fight. Even though Aniston claimed in the interview that she loved the house and being with Theroux there, she’s now selling it.

1. He Was Absent from Her 49th Birthday Festivities

On February 11, The Good Girl star turned 49. She celebrated in Malibu with her friends, which included Courteney Cox, Aleen Keshishian, Mandy Ingber, Leigh Kilton-Smith, and Andrea Bendewald. Noticeably absent was Aniston’s husband of two and a half years. He was on the opposite coast attending New York Fashion Week. 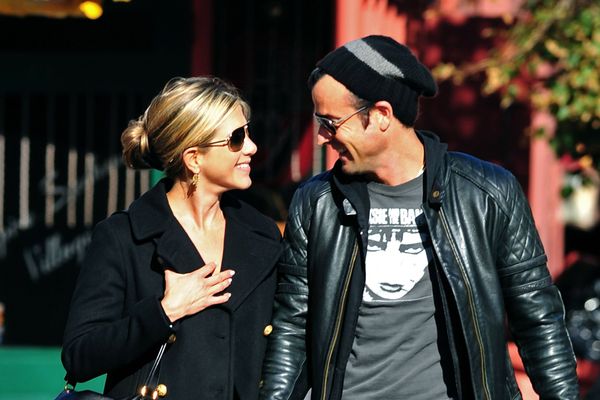