1990’s Ghost is a movie that stands the test of time. Starring Demi Moore, and the late, great Patrick Swayze, the romantic fantasy was not expected to be as successful as it was and even though nearly three decades has passed since its release, fans are as passionate as ever about the film. The film raised the popularity of its stars, created a lot more interest in pottery and was credited with revitalizing the romance genre, yet there is still quite a bit that fans don’t know about the film! Here are 12 things you never knew about Ghost:

Upon its production and release, even the stars of Ghost were not anticipating it to be a box-office blockbuster but it surprised everyone with its unexpected success. Worldwide the movie ended up grossing $505,702,588 which well exceeded the budget of $22 million. Ghost was such a big success that it even out-earned Home Alone making it the highest-grossing film of 1990 and one of the highest-grossing supernatural-themed movies of all time.

11. Demi Moore Didn’t Have Faith In It

Despite taking on the lead role of Molly for the film, Demi Moore admitted that after she read the script she didn’t think the movie was going to resonate too well with audiences and she even called it a “recipe for disaster.” “It’s a love story, and it’s a guy – a dead guy – trying to save his wife, and there is a comedy part, but really, really it’s a love story, and I thought, ‘Wow, this is really a recipe for disaster … It’s either going to be something really special, really amazing, or really an absolute bust,'” the actress shared at an event in 2013.

Tony Goldwyn became one of the most recognizable villains of the ’90s thanks to his role as Carl Bruner in the film, but it wasn’t easy for him to get the role. The filmmakers wanted a well known actor for the part but kept returning to the then-unknown Goldwyn’s audition tape even though he seemed “too nice.” Eventually he got the role thanks to his wife who was working on the movie as the production designer and while the role was huge for the actor, it didn’t exactly make him popular. The actor recalled an incident with a waitress, who knew she hated him but didn’t know why. “Right when the movie came out I was doing a play in New York. I was at a restaurant, and I kept asking this waitress if we could be seated. She was really rude to me. She wouldn’t take my order. I finally get my food, and she’s staring at me as I’m eating my meal. She goes, ‘Excuse me, are you an actor? You’re in that movie Ghost.’ I said, ‘Yes.’ She said, ‘I’m so sorry. I thought you were a guy that I had slept with who’d been horrible to me.'”

Although the film would not be the same without Whoopi Goldberg, for quite some time she wasn’t even going to be in it. Apparently, the producers wanted a “nobody” for the role so they held off on casting her for awhile until Patrick Swayze stepped in. According to Goldberg, Swayze told the producers that unless they gave her the part he was going to leave the movie even though he had never met her. After she won her Oscar in 1991 for the role, she credited it to Swayze for being such a “stand-up guy.”

While Demi Moore was not an unknown actress by any means, before Ghost she wasn’t exactly at the top of Hollywood either. Moore’s acting talents impressed the producers, but what really helped her land the role was the fact that she is able to cry on demand and can even choose which eye to cry from. After her casting, things got rocky when Moore decided to cut her hair drastically and did so without informing the director. Although he was angry at first, he later conceded it was perfect for the character of Molly. In the end, the unexpected success of Ghost and Moore’s lead role in it opened up the doors for some of the actress’s biggest roles including in A Few Good Men, Indecent Proposal, and Disclosure. Her major roles following Ghost made Moore the highest-paid actress at the time.

Filming Ghost was more difficult than most fans realize and Patrick Swayze even admitted that Sam Wheat was the hardest role he ever had to take on because as a ghost, he was merely an observer, not an active participant. One scene that caused some issues to film was the night chase scene. At the time of filming it was winter in New York City, and while the everyone else got to be bundled up, the cold wasn’t supposed to bother Swayze’s Sam, but of course, he was freezing. In order to make sure his breath wasn’t seen, they had him chew ice.

Patrick Swayze’s role in Ghost was not only the most difficult for him as an actor, but it also took its toll emotionally. At first, screenwriter Bruce Joel Rubin and director Jerry Zucker did not think that Swayze was right for the role because of his action star reputation and he was fresh off his Road House fame. It wasn’t until they saw an interview where the star cried about the recent death of his father that they realized that he had a soft and vulnerable side that he was willing to show. Later, Swayze revealed that the scene in which he looks in on the plaster dummy representing his character’s body reminded him too much of when he saw his father’s body lying in its coffin at his funeral. “I had pushed that memory out of my life until that moment on location when it all came back, big time,” he said. “There were a few scenes where something happened to me that was very scary.”

Long after Ghost was released, two people brought together by the film shared tragic coincidences. On December 26, 2005, Vincent Shiavelli, who played the ghost on the subway in the movie, passed away at the age of 57 from lung cancer. Four years later, Patrick Swayze passed away on September 14, 2009 from pancreatic cancer, also at the age of 57.

Like most movies, finding the right cast takes time and many other stars are offered roles before the right one is found and the people behind Ghost went after some big names for the lead roles. Actors such as Kevin Bacon, Tom Cruise, Johnny Depp, Mel Gibson, Tom Hanks, Nicolas Cage and more were all approached for the part of Sam Wheat but turned it down. As for the role of Molly Jensen, many actresses including Kim Basinger, Nicole Kidman, Jennifer Jason Leigh, Molly Ringwald and more were all in mind for the part. Paul Hogan has spoken out about being asked to play the part of Sam Wheat but turned it down because he didn’t like that the movie wasn’t funny enough. In addition, Demi Moore’s then-husband Bruce Willis was also offered the part, and six years later revealed he turned it down because he thought the movie wouldn’t work and was definitely proved wrong. “I just didn’t get it. I said, ‘Hey, the guy’s dead. How are you gonna have a romance?’ Famous last words,” Willis conceded.

Although Ghost is a romance, the supernatural theme also made for some truly creepy moments, including the dark shadows that take bad people to the afterlife. The noise they made stood out to fans of the movie, but it became even creepier when they found out how the noise was made. It was revealed that the noise came from a recording of a baby crying that was played backward and very slowly.

One of the most popular recent terms for when someone you are dating disappears out of your life without explanation is called being “ghosted,” and it turns out the 1990 classic could be the inspiration behind it. Before long Swayze’s named in relation to his Ghost character began being used in songs and raps and most notably on 2Pac’s “Runnin’ (Dying to Live)” from the early ’90s in which Notorious B.I.G. raps: “That’s why I bust back, it don’t faze me / When he drop, take his glock, and I’m Swayze,” and before long “ghost” became slang for “gone” or leaving suddenly and eventually transformed into the now popular term “ghosted.”

Although many involved with the movie didn’t believe it was going to be as successful as it was, screenwriter Bruce Joel Rubin still had very high hopes for the film, hopes that were greatly dashed when Jerry Zucker signed on to direct. Zucker was known for directing the comedy Airplane! and Rubin didn’t believe that Zucker could go from something like Airplane! to something as serious as Ghost. “I wanted Milos Forman or Stanley Kubrick [to direct the movie],” Rubin admitted. “When I was told that the guy who made Airplane! was going to direct Ghost, I cried.” In the end, working with Zucker through 19 drafts of the screenplay is what helped Rubin flesh out ideas he was trying to get onto the page, and eventually they created the movie that so many love so much. 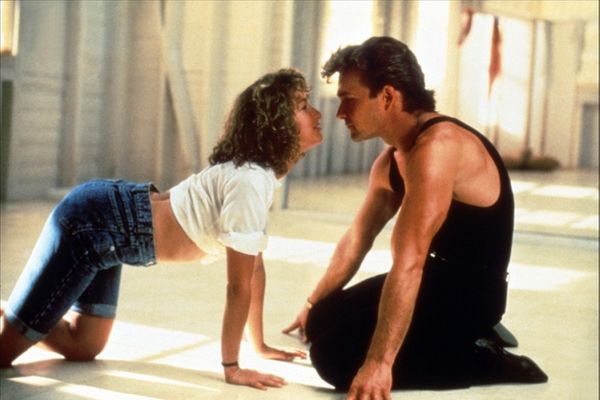