For the past few years, Jennifer Garner has been making the news primarily because of her divorce from Ben Affleck, but there’s more to the actress and mother than a rocky marriage and some subsequent scandals. From her mighty personal wealth to a scary stalking incident, Jennifer’s life is more than just a famous career and famous soon-to-be ex-hubby. Here are 12 things you didn’t know about Jennifer Garner.

12. Jennifer Garner is (Seriously) Rolling In The Dough

Starring as a super spy in the hit series Alias as well as landing the leading roles in a string of popular movies like 13 Going on 30 have helped to make Jennifer Garner a very wealthy woman. According to Celebrity Net Worth, she is currently banking somewhere in the area of a cool $60 million (US). Not bad, gal, not bad at all.

11. She Didn’t See Acting as a Possibility

It’s easy to assume that in the super-competitive Hollywood industry that everyone who makes it to the top had every intention of making their way there and would do whatever was necessary to reach their lofty goal. That wasn’t the case with Jennifer Garner. “I wanted to be a doctor, a librarian. … (Acting) wasn’t possible to me.” But that didn’t stop the determined Garner and once the acting bug bit she was ready and willing to learn anything and everything she could about her future profession. “The more I learned what there was to learn about this field, the more hungry I became for it. It comes out of wanting to learn more, as opposed to ‘I want to be a star.’ I never felt that way.” Good thing for fans she’s a star whether she intended to be or not.

Jennifer Garner doesn’t quite come across as a wild child and there may be a good reason for that. Describing her father as very conservative, she had to follow rules such as no make-up and no bikinis and wasn’t allowed to even get her ears pierced until she was 16. She said her family was “just a step away from being Amish,” but still she says, “I’d hate to say it was strict. It was just not condoned. I never felt hemmed in.” You have to wonder what her sorta-strict father would think about the wild adventures his daughter ended up in as the CIA’s Sydney Bristow.

9. She Didn’t Know She Was Pretty

Insecurity can plague even the prettiest people and knowing where you land on the hotness scale is practically impossible if you’re supposed to determine that yourself. This, along with a mother that didn’t prioritize looks, resulted in Jennifer Garner (a future and regular contender for Hollywood’s hottest) unsure if she was good-looking or not. “What my mom did that I valued so much was to not place beauty high on the list of priorities … It was a shock when I got to college to hear people say I was pretty.” That must have been a pleasant shock.

Jennifer Garner enjoyed the full post-secondary educational experience while attending Denison University in Granville, Ohio. She pledged as a sorority member of Pi Beta Phi and honestly, it’s not hard at all to imagine that super-sweet smile earning her a fond place amongst her college sisters. She graduated successfully with a Bachelor of Fine Arts before moving on to her famous acting career.

Jennifer Garner’s most famous television role was undeniably the butt-kicking, case-solving CIA agent Sydney Bristow on the wildly popular Alias. But her first television role came years before when she appeared in a made-for-television movie. The film was titled Zoya and was based on a Danielle Steel novel. Perhaps not Jennifer Garner’s most memorable or significant role, but all actors have to pay their dues.

All of the news these days focuses fully on Jennifer Garner and her marriage (and impending divorce) from fellow star Ben Affleck, which makes it easy to forget that he’s not Jennifer’s first husband or even her first famous husband at that. All the way back in 1998, Jennifer Garner appeared on the super successful show, Felicity. It was then that she met one of the stars of the show, Scott Foley, and the two quickly fell in love. In October of 2000, Jennifer and Scott were married and appeared to be incredibly happy, often popping up in photos smiling with their arms around each other. But in March of 2003, they shocked the public by announcing that they were separating and in May Jennifer filed for divorce citing the familiar irreconcilable difference.

4. Her Alias Dad Was The Only Guest At Her Wedding

It’s not uncommon for co-stars to become close while working together for long hours, days on end, for years and years. This is the case with Jennifer Garner and Victor Garber who played her dad on Alias. When Jennifer married Ben Affleck on June 29, 2005, it was a private ceremony at the Parrot Cay resort on the Turks and Caicos Islands. So private that there was only one guest, her Alias dad Victor Garber. There wasn’t even a minister or judge presiding as Victor himself acted as the officiant as the loving pair said, “I do.”

Both Jennifer Garner and Ben Affleck have said that they understand that the inconvenience and existence of paparazzi is an unfortunate side-effect of their jobs. However, when it comes to their kids, that’s when their patience ends. “There’s an idea that because our pictures are everywhere that we are complicit in it. When really what happens is they’re waiting outside our door every single day. My kids take karate for example, and we have our classes at the same time every week. So the guys know when we have karate, and so 20 of them wait there for us every single class. So that’s a lot of energy coming at little, little kids.” Jennifer Garner is active in the fight to create and enforce rules and laws that will protect her children and the children of other celebrities from over-zealous paparazzi who are more than willing to cross the line. She’s even gone so far as to testify alongside fellow actor and mother Halle Berry before the Assembly Judiciary Committee. The bill they helped get passed in September of 2013 aims to protect celebrities’ children from harassment by photographers.

Despite coming from an Amish-like, conservative background, Jennifer Garner herself leans to the left when it comes to politics and she’s willing to put her money behind her beliefs. In 2014, Jennifer Garner donated $25,000 to the campaign of well-known Democrat Wendy Davis and back in 2006, she appeared as a speaker at a Democratic rally for Congressional candidate Jerry McNerney.

Stardom and fame come with more than just a few perks, but there are also a few drawbacks. Drawback is too light a term for the incredibly scary situation a celebrity faces when they become the target of a stalker. In 2002 Jennifer Garner faced just such a terrifying ordeal when she became aware of the fact that she was being stalked by a man named Steven Burky. The stalking continued for years and eventually he was arrested in December 2009 when he violated the terms of a restraining order that had been set against him the previous year. He was charged with two counts of stalking and pled not guilty by reason of insanity which the court agreed with and he was sent to a mental hospital with an order that if he should ever be released, he is to stay away from Jennifer Garner and her family for at least 10 years. It must be a relief to Jennifer that he’s not immediately around, but it must also be unnerving to know that he’s not completely gone. 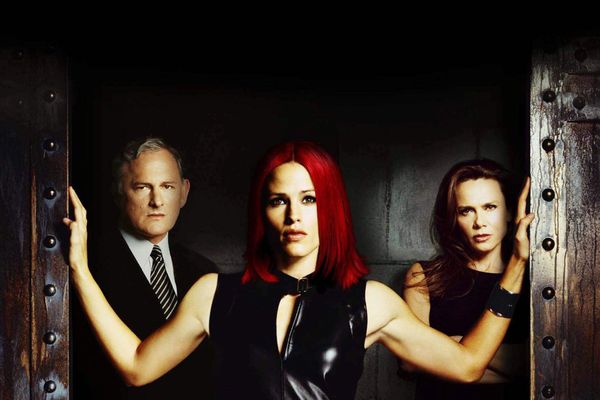 8 Things You Didn’t Know About Alias