13 Things We Miss About 7th Heaven

From 1996 to 2007, America fell in love with the Camden family. Reverend Eric Camden and his wife Annie managed the challenges of raising five, then seven children. The Camden siblings struggled to find their own paths, keep the faith, stay close as a family, and start their own families. Life inside the Camden household was never boring as neighbors, friends, family, girlfriends and boyfriends sought guidance and advice from the Camdens to cope with their daily lives. For those of you who miss 7th Heaven, here are 13 things that we are currently missing about the show!

Everyone had a crush on Matt Camden (Barry Watson) and secretly wished he had ended up with his first love Heather Cain (Andrea Ferrell). But really, no one was good enough for hunky Matt.

In the tenth season, the Camdens were worried about Ruth’s (Mackenzie Rosman) provocative dancing at a church dance. Oh the awkwardness!

11. Going to Church with the Camdens

Every Monday night, instead of taking a seat in the pews, Americans sat on their couches and listened to the life lessons that Reverend Camden (Stephen Collins) gave from his pulpit, which included accepting others, being kind, and loving your family. He always had such good advice!

Who could forget Reverend Eric Camden (Stephen Collins) running home, falling to his knees in front of his wife and children to ask Annie (Catherine Hicks) “will you marry me?” in celebration of their wedding anniversary? We know we can’t!

9. The Most Awkward Twins on TV

Lorenzo and Nikolas Brino (Sam and David Camden) may have been acting since birth, but they were not natural born actors. This duo was stiff, and delivered every line without expression, but they were adorable!

When Lucy Camden (Beverly Mitchell) gets her first period, she has her older sister Mary (Jessica Biel) to help her deal with the cramps, and gets congratulated by her father. Audiences swooned and wished all fathers were that supportive and bought their daughters pads.

Happy the dog was the cuddliest and furriest family pet on TV and his antics were adored by fans. How cute was it when Ruth (Mackenzie Rosman) and Simon Camden (David Gallagher) dyed Happy’s coat so his previous owners wouldn’t recognize him?

6. Sisters of the Pop Stars

It seems that producer Aaron Spelling had a soft spot for Ashlee Simpson (Cecilia Smith) and Haylie Duff (Sandy Jameson) who are the younger sisters of Jessica Simpson and Hillary Duff. While their acting skills were debatable, they were amusing to watch.

5. Families Of All Kinds

When the opening sequence started with a close up of that beautiful house, everyone imagined living there. The Camden house is located in Altadena, California, and its exterior has been used in several Hollywood projects including Bye Bye Love (1995), Risky Business (1983), The Baby-Sitters Club (1995), How Stella Got Her Groove Back (1998), and Can’t Hardly Wait (1998).

Who didn’t cry when Matt Camden (Barry Watson) married Sarah Glass (Sarah Danielle Goldberg) and Lucy Camden (Beverley Mitchell) said ‘I do’ to Kevin. Even though Rose (Sarah Thompson) was very hard to like at first, there was disappointment when she and Simon never made it down the aisle. When Mitchell got married in real life, her bridesmaids included Jessica Biel (Mary Camden) and Mackenzie Rosman (Ruthie Camden).

7th Heaven was filled with heart wrenching scenes and one of the best was in season two, when Lucy (Beverly Mitchell)’s friends ask her to drive with them to have dinner in the city. Lucy is forbidden to go, and her friend Sarah dies in a fatal car crash. Mitchell actually experienced these events in real life.

Mary Camden (Jessica Biel) was the cool older sister, every girl wanted and oh the drama she left in her wake. Whether it was vandalizing the school gym, dating a single dad, crying to get her driver’s license, drinking while babysitting, seeing an older man or cheating on her boyfriend, it was always entertaining when Mary was in the show. 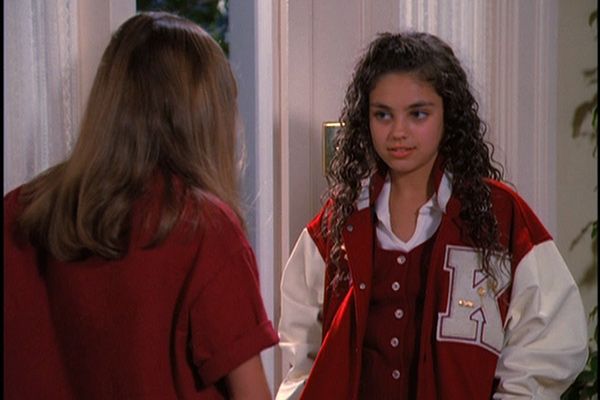