As a long-time running medical drama, Grey’s Anatomy has the unique ability to debut many aspiring actors and actresses before they reach their peak. With an impressive thirteen seasons under its belt, C-list stars are constantly popping up and trying to make their claim to fame on the show. After taking a look back through the seasons of the Shonda Rhimes directed show, it’s clear that many actors who played a small role in Grey’s Anatomy actually ended up on some of Rhime’s later series! To learn more, we have compiled a list of the 15 celebrities you most likely forgot had guest-starred on an episode or two of Grey’s Anatomy:

Months after making his big debut on football drama Friday Night Lights, Jesse Plemons appeared on Grey’s Anatomy in a 2006 episode. He starred as Jake Button and had a brain tumor caused by a unique medical condition called lionitis which made the actor almost unrecognizable. In the episode, he died during the resection of the tumor.

Scream Queens star Keke Palmer made her debut on Grey’s Anatomy in season 10, episode 16. She starred as Cheryl Jeffries, a pregnant teenager who didn’t believe she would be able to survive childbirth due to a heart condition. The teen begged Cristina Yang to let her participate in a clinical trial that could help her.

Before making a name for herself on the later seasons of One Tree Hill, Jana Rae Kramer was featured in a two-part episode of Grey’s Anatomy called “Freedom.” She played Lola, a girl who another character, Andrew, is crushing on. To impress her, he follows through with a dare to lay in concrete.

In contrast to her role as a doctor on Scrubs, Sarah Chalke also guest-starred on Grey’s Anatomy as a mother advocating for her sick son. The episode was actually inspired by a real-life experience that Chalke was dealing with in her son’s struggle with Kawasaki Disease. Chalke pitched the idea to the show’s director Shonda Rhimes and the producers included all the symptoms of the disease to help bring awareness to viewers.

Very early on in her acting career, Little Miss Sunshine star Abigail Breslin appeared on an episode of Grey’s Anatomy as Megan Clover. The little girl she played befriended her doctor Alex and bonded with him because she thought she had superpowers due to her inability to feel pain.

Before starring as the lead in the teen drama Switched at Birth, and after starring as Luke’s daughter on Gilmore Girls, Vanessa Marano guest-starred on Grey’s Anatomy. Marano played Holly Wheeler who was admitted to the hospital when she was found injured in a ravine. In the episode, it is revealed that she was kidnapped when she was only 6-years old!

Before starring on Deadwood and American Horror Story, Sarah Paulson took on the difficult role of playing Ellis Grey during her youth and as a resident. During the flashback episode, Ellis and the young Richard Webber worked on a patient diagnosed with GRID, the virus that would later be called AIDS.

A product of Shondaland and the star of the hit Netflix series Scandal, Katie Lowes first appeared on Grey’s Anatomy as an unidentified blood donor in season 7. Hopefully, her lead role as Quinn on Scandal compensates for playing a minor character without a name on Grey’s Anatomy!

Before playing high school quarterback Matt from Friday Night Lights, Zach Gilford appeared as Charlie Lowell on season five of Grey’s Anatomy. Gilford played a former military officer with mysterious leg pain that prevented him from working to his full potential. He told the doctors he wanted them to amputate his leg and fit him with a prosthetic so he could return to his soldier duties. The doctors were hesitant to amputate a functional leg, but eventually gave in and were successful.

Edward Herrmann, best known as Richard Gilmore from Gilmore Girls, had his own guest appearance on Grey’s Anatomy and played the role of Norman Shales. He starred as Alex’s adorable older intern that was past his prime and looked mildly out of place among his peers. Unfortunately, Herrmann passed away in 2014.

Contrary to his kind-hearted father and coach role on Friday Night Lights, Kyle Chandler appeared on Grey’s Anatomy as an angry bomb squad leader, who helps to evacuate the hospital when a man comes in with a live explosive in his stomach. Despite his brash nature on the show, he helps Meredith to stay calm after she is forced to stabilize the bomb herself, but he is killed in the high-stress situation. He later appears again to help Meredith from the “afterlife” as she is drowning.

Popstar and A Walk To Remember lead Mandy Moore starred in a four-episode gig on Grey’s Anatomy and took part in one of the most memorable plot twists of the entire show — the hospital shooting. Moore played the sweet Mary Portman who was unexpectedly trapped inside the hospital during the shooting. She miraculously survived the traumatic event, but unfortunately passed six months later during a routine surgery.

After her Camp Rock debut, Disney star Demi Lovato starred on one episode of Grey’s Anatomy in its sixth season. She appeared on screen as Haley, a teen originally diagnosed as a paranoid schizophrenic, but later it was discovered she actually had Superior Canal Dehiscence syndrome.

Another resident Shonda Rhimes’ character is Liza Weil who has appeared on both Scandal and How To Get Away with Murder. Weil is also well-known for playing Paris on the beloved TV series Gilmore Girls. She appeared on screen in a 2009 episode of Grey’s Anatomy as Alison Clark, a cancer patient who befriends Izzie in the early seasons.

Of all the shocking appearances on the set of Grey’s Anatomy, Dylan Minnette took us most by surprise. He recently starred as Clay Jensen on the controversial and highly popular Netflix series 13 Reasons Why. Before his debut as a lead character on the Netflix hit, he took to the screen of Grey’s Anatomy as a young boy with a hearing disability. In the episode, Dr. Mark Sloan builds him a pair of ears which drastically improves his hearing. Jokes have been made on Twitter stating that because Dr. Sloan built Minnette a pair of ears, he was able to listen to Hannah’s tapes on 13 Reasons Why. The Netflix drama solely relies on Clay Jensen’s ability to hear, so the irony of this storyline is too good to ignore! 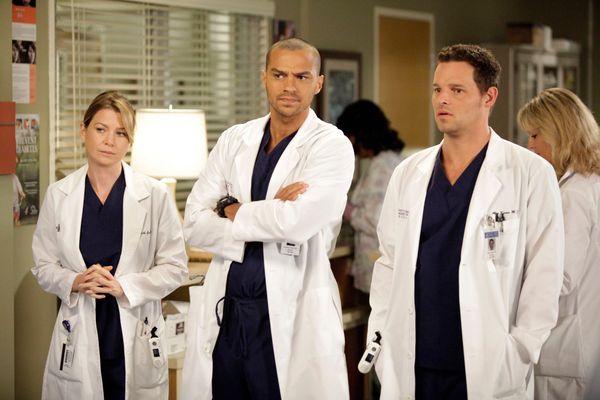