Any Grey’s Anatomy fan will admit that the show is not like it was when it first aired back in 2005. It seems a long time ago that Meredith Grey, Cristina Yang, George O’Malley, Alex Karev, and Izzie Stevens were just starting their residency at Seattle Grace Hospital. In that time a lot has changed, and a lot of great characters have exited the show, and one of the biggest losses for fans was the exit of Sandra Oh (Cristina Yang). Aside from all the drama of romantic relationships, there was nothing better than watching Cristina and Meredith have amazing best friend moments, and there were a lot of them! Here are Cristina and Meredith’s memorable moments from Grey’s Anatomy.

When it comes to any of the doctors at Seattle Grace, the two least likely to be thrilled at the prospect of participating in a baseball game against another hospital would be Cristina Yang and Meredith Grey. Season eight’s “Put Me In, Coach” was hilarious, and a nice break from a lot of the dramatic and serious moments that play a major part in Cristina and Meredith’s friendship. Their dry humor was on full display in this episode, and nothing was better than watching them get drunk out of a flask in the outfield while not caring at all about the game Owen had put together. 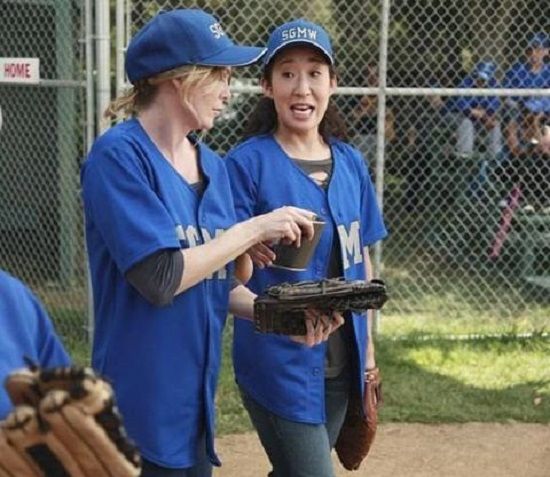 Fans of Grey’s Anatomy are used to Meredith seemingly always having a crisis while Cristina is always the voice of reason and logic who helps her through that. For that reason, it is always refreshing when those roles are reversed and they were in season three’s finale episode “Didn’t We Almost Have It All?” After Burke leaves Cristina at the altar, fans saw her in one of her rare and most vulnerable moments, and of course, Meredith is right there by her side, even cutting her out of her wedding dress when she hyperventilated. When Meredith held Cristina as she wept, it was a chance for her to be a support system for Cristina in one of her most emotional and toughest moments, when usually it is Cristina comforting Meredith. 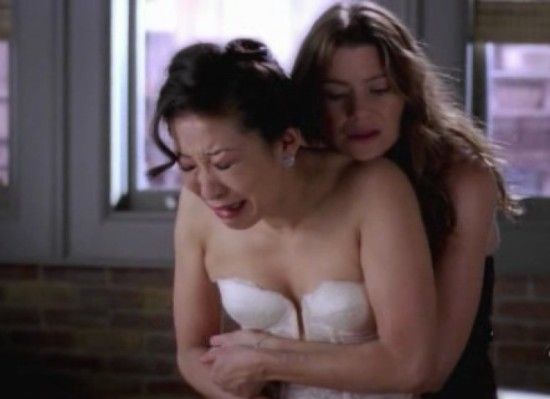 There is never any shortage of critical, almost fatal moments for both characters, and one of the first they had to endure was in season three. After the ferry accident in season three, Meredith is left unconscious and no one was sure how much brain function she had left after being deprived of oxygen for so long. Of course, Cristina was by Meredith’s bedside the entire time and was very emotional when she was able to get Meredith to utter one word.

Cristina: “Your brain works, okay? So all you need to do is form a word. Please.”
Meredith: “Ouch.”
Cristina: “Oh…Hi! I’m getting married to Burke! Not that that should be anywhere on your list of thoughts right now, but just in case you slip in the hall later…you are the one person I wanted to tell. Thank you for not dying.”

Despite being the best of friends, it didn’t mean there weren’t any tense moments between the two, and more than once their friendship went on hiatus which almost hit harder than break-ups of the show’s favorite couples. One of their biggest fights was in season 10 when Cristina tells Meredith that she is not as good of a doctor as her because her priorities with Derek and their children have shifted her focus. This caused perhaps the biggest, and iciest fight between the two best friends, but it definitely wasn’t going to be the end of the Meredith and Cristina Saga. When the pair finally made up and acknowledged that they have become different people, it proved that no matter how much their professional or personal lives change, they will always be there for each other, no matter what, and that would never change. 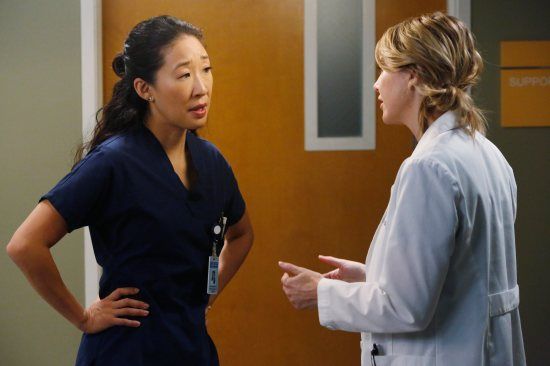 Any Grey‘s fan can admit that many times Meredith’s self-pity and moods, and determination to be “dark, and twisty” can get annoying, and the only person who can tell her to pull it together is Cristina. In the season two episode “It’s the End of the World,” Meredith refuses to leave her room because Derek had gotten back together with Addison, and she was generally feeling depressed about her life. As a good friend, Cristina listened but then she went ahead and said and did what everyone wanted to: “Whatever. Everybody has problems. Now get your a– out of bed and get to work. Now! Move, move, move!” It takes a good friend to comfort you, but it is a really great friend who won’t let you dwell in self-pity.

Over the many years of Grey’s Anatomy before Sandra Oh’s exit, there were a lot of big moments between the two best friends, and sometimes it seems the more subtle moments were under-appreciated. One of Cristina and Meredith’s best moments that is often overlooked was in the season seven premiere “With You I’m Born Again.” Everyone is trying to individually deal with the shooting at the hospital in season six, and Cristina has thrown herself into wedding planning and is uncharacteristically not so focused on her job. When Meredith confronts Cristina, Cristina asks her, “Are you trying to talk me out of this?” and says, “You know, no you don’t get to do this. All you get to do is help me break the tie between the lilies of the valley and the peonies.” To this, Meredith responds, “No, no. I do get to do this. I do get to do this – Derek is the love of my life, but you’re my soulmate.” 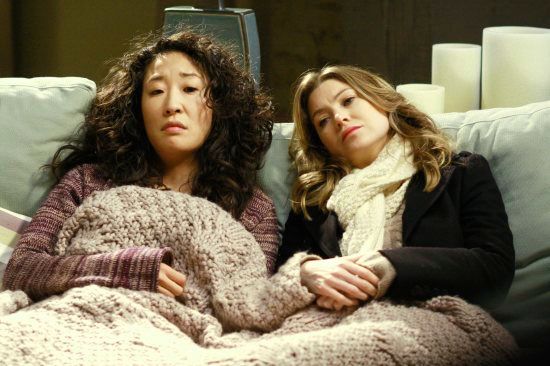 There is perhaps no quote or statement from Grey’s Anatomy more widely used and loved than “You’re my person.” These three words are said between Meredith and Cristina many, many times and it all goes back to the beginning of season two in the episode “Raindrops Keep Falling on My Head.” After Cristina decides to get an abortion, she tells Meredith, “The clinic has a policy. They wouldn’t let me confirm my appointment unless I designated an emergency contact person. Someone to be there just in case and…to help me home, you know, after. Anyway I put your name down, that’s why I told you I’m pregnant. You’re my person.” 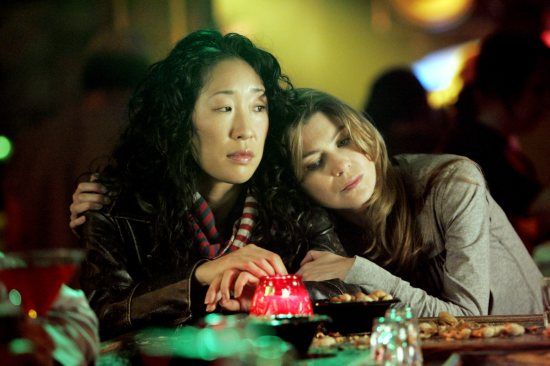 The plane crash in season eight is one of the most memorable and defining events in the entire series. Of all the people on board, Meredith was the least injured and was trying desperately to help the others and find Derek. Only one episode before, Cristina had broken fan’s hearts when she told Meredith that in order to commit to Owen and their marriage he needed to be “her person.” After the crash and while searching for Derek, the two women had one of their most memorable and heartbreaking moments, when in the wake of the crash, Lexie’s death, and the prospect that Derek was dead too, Meredith said, “Cristina, you are still my person. Even if I’m not yours.”

Everything changed for the show and the characters after the plane crash in season eight and it made them re-evaluate life and death, causing Meredith to think more about what would happen to her children if something were to happen to herself and Derek. As she got closer to her due date in season nine she talked to Cristina about being the person to take care of her kids if anything were to happen, which of course shocked fans and Cristina, because she is not the mothering type. When Cristina agreed to take care of “Zola and the fetus” it was one of their friendship’s biggest and best moments because there is absolutely nothing they would not do for each other, even if it means the child-adverse Cristina taking responsibility for Meredith’s children. 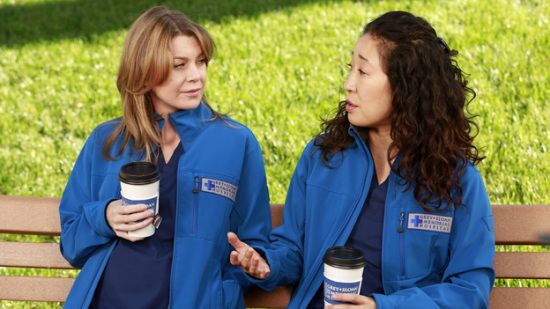 Last but certainly not least are the many and iconic “dance it out” moments between Cristina and Meredith. Neither one of them actually seems like the dancing type, but it is their thing and is one of those few moments of happiness that the two share to try to get through things. 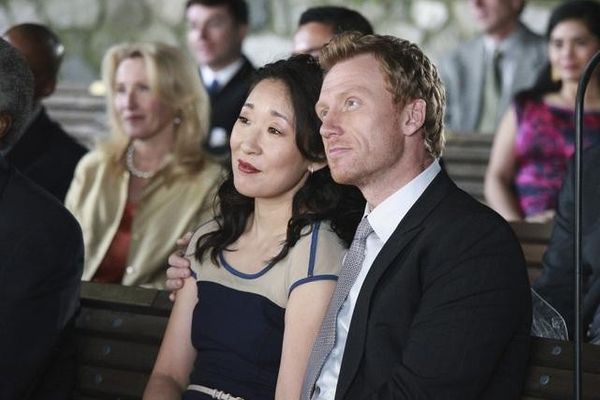