The Academy Award nominations came out early this morning and, as always, there have been some pretty big surprises. The Academy seems to like doing their own thing, so while they do nominate some of the same people as other awards shows, they do like to mix it up, just a little. So far, we’ve seen some pretty intense Oscar campaigns from some actors and actresses who are desperate to get a nod. For some of them, this worked; however, for others, they weren’t so lucky. We have collected 7 of the biggest Academy Award snubs and surprises of 2015!

Jake Gyllenhaal has made the quite the career comeback this year. After falling into relative obscurity after his role in “Brokeback Mountain,” he’s finally back and with a vengeance. His performance in the crime thriller “Nightcrawler” has been met with critical acclaim. Critics have been comparing him to a young Robert De Niro in “Taxi Driver” and “The King of Comedy.” He’s also received a Golden Globe nomination, as well as Best Actor nods from the Screen Actors Guild and BAFTA. Many thought the Academy would follow suit and give him a nomination, but they didn’t.

We’re not too worried about this snub though. Given how Gyllenhaal’s career has changed considerably over the last year, we think he has plenty of time to get nominated for another Academy Award. We think that he will definitely pull through this, unlike some of the other actors and actresses who failed to get a nomination.

Despite giving a great performance in “Wild” alongside Reese Witherspoon, Laura Dern had been shut out by all of the major awards shows – until now! She has just received a Best Supporting nod from the Academy. We think it is much deserved. She’s not even 10 years older than her Oscar-winning co-star; however, she played Witherspoon’s mother convincingly – not an easy feat. Some were predicting last fall that she would be an awards contender for the 2014-15 season; however, none of that panned out until now.

We are really rooting for Dern, but she has some stiff competition this year. She’s up against Patricia Arquette (“Boyhood”), Keira Knightley (“The Imitation Game”), Emma Stone (“Birdman”) and Meryl Streep (“Into the Woods”). Arquette brought home the Golden Globe Award for Best Supporting this year this past Sunday, so we think that she is Dern’s major competition. One never knows what will happen at the Oscars though!

Amy Adams is one of the best actresses of her generation. She has been nominated for five Academy Awards so far in her career, but she has yet to actually take one home. Critics have been raving about her performance in Tim Burton’s “Big Eyes.” Even Margaret Keane, who the film is focused on, was impressed with Adams’ portrayal of her. “It was like seeing myself 50 years ago! She was absolutely perfect,” the artist said.

We really thought that Adams had a good shot at getting an Academy Award nomination this year. She already took home the Golden Globe for her performance in the biographical comedy-drama and she has also been nominated for a BAFTA award for Best Actress. We’re not sure why she wasn’t nominated. She is the reportedly fantastic in the film. One of these years, the Academy is finally going to have to give her an Oscar – we’re shocked she hasn’t won one yet.

Bradley Cooper has been shut out from all the major awards circuits this year for his performance in “American Sniper.” He didn’t get a nomination from the Golden Globes, the Screen Actors Guild or BAFTA. Many people were left wondering if the Academy was going to overlook him as well. The Oscar nominations were announced this morning and it looks like they were impressed with BCoop – he got a Best Actor nod.

This is Cooper’s third Academy Award nomination. He was nominated for his performance in “Silver Linings Playbook” and “American Hustle.” Critics have been impressed his portrayal of Chris Kyle so was his wife. “Not only did he do his research and do the physical part of it and get the dialect, which is such an odd mix of different places that Chris lived. But then he took this man, who truly is one of a kind and is charismatic and soft and tough and strong, and has the biggest heart of anyone I’ve ever met. And he brought that to the screen in a way that that…you will know Chris at the end of this movie,” she said.

Angelina Jolie’s second directorial effort for the wartime epic “Unbroken” has not received any love from any of the major awards shows. She didn’t get a nomination from the Golden Globes, the Screen Actors Guild, BAFTA or the Academy. This has come as a total shock. Late last year, many were predicting that she would be a frontrunner for the 2014-15 awards season. This has not been the case. The only place that the film is getting any love is at the box office. It has already made over $100 million domestically.

Rumor has it that Jolie is really “hurt” and “upset” that the film has been snubbed by all of the major awards circuits. She feels that “Unbroken” has been “overlooked.” We’re not sure how true any of this is. All we know is that the film has received pretty mixed reviews from critics, which makes us think that Jolie probably was undeserving of a bunch of awards nods anyway.

Marion Cotillard just received an Academy Award nod for her performance in the French film, “Two Days, One Night.” Many people were wondering if Jennifer Aniston was going to get a nod for “Cake,” but this French actress seems to have taken her place on the Best Actress list. So far, this is Cotillard’s only real award nomination. The Golden Globes have snubbed her and so have the Screen Actors Guild and BAFTA.

While the critics have raved about her performance in the film, calling it one of her best, we really wonder if she has a great chance of winning. We think that Julianne Moore is a shoe-in. She already took the Golden Globe Award for Best Actress this past weekend for her portrayal of a professor who is diagnosed with early onset Alzheimer’s. If Cotillard were to win, this would be her second Best Actress Oscar. She won back in 2007 for her role in “La Vie En Rose.”

Jennifer Aniston has been campaigning hard for award recognition. Rumor has it that she hired a professional Oscar campaign strategist, who has worked on campaigns for “The King’s Speech” and “The Artist,” to help her win favor from the Academy. A So far, her efforts have paid off – kind of. She scored a Golden Globe nomination, as well as a Screen Actors Guild nod for Best Actress for her performance in “Cake;” however, she didn’t get a nomination from BAFTA and now the Academy has also snubbed her.

The only shot the former “Friends” star has left at an award for her performance is from the Screen Actors Guild. The Golden Globe award went to Julianne Moore. We’re guessing that Aniston will make it to the Academy Awards this year, but as a presenter. At least she can be rest assured that she won’t run into Angelina Jolie and Brad Pitt. We’re pretty these two won’t be going. 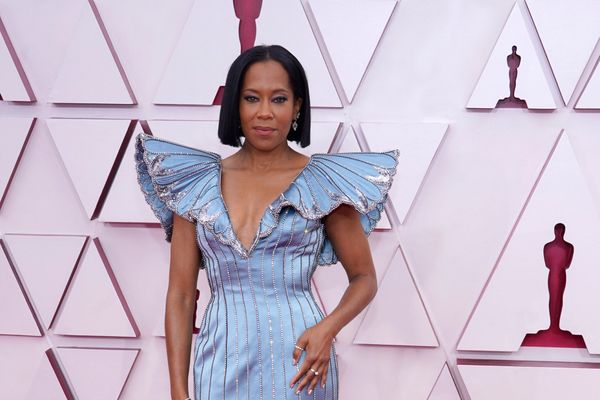