7 General Hospital Spoilers For The Week (May 2)

Attention General Hospital (GH) fans! It’s a brand new month and things are heating up quickly in the land of Port Charles. Learn more about what will happen to Anna, Sonny, Franco, JaSam, and so many more, in the GH spoilers for the week of May 2nd:

Hale burst onto the GH scene last week with information about Duke’s shooting, and with evidence that was pointing the finger at Carlos. This week, Alexis tries to speak to him, but has no success. Unfortunately, Nathan finds Hale and he doesn’t look so good. Could he be dead?

6. Is Franco Back To His Old Ways?

JaSam seem to think so. They believe this week, that Franco is the one following them in the stables, yet he denies the accusation. They find his Nina drawing and come to the conclusion that he has reverted back to the old, deadly Franco they once knew. In another weird move, Franco gives Nina the drawing he made of her. While she does admires it, it also upsets her and causes her some concern about Franco. He then turns to Elizabeth to chat about his feelings and she lends him an ear. This further infuriates Jason, who wants her to shake Franco from her life and Jake’s — however, Liz refuses to do so.

5. Kristina Continues To Be Confused

While Kristina continues to pine over her female professor, Parker, she also tries to pursue a new guy she’s met, Aaron. Kristina confides in her sister Molly, that she wants to see where this new relationship can lead to. Molly is taken aback by this.

4. Julian Is Confronted By His Family

Alexis is starting to put two-and-two together as it relates to Sonny and Julian. Why she comes close to finding out the truth, Julian throws her a curve ball by finding an alibi when it comes to a crime. Alexis will demand the whole truth from Julian this week…but will she get it? Sam also sits down with her father this week to chat about his illegal doings. Can he convince his daughter that he did not have anything to do with Sonny’s shooting?

Carly goes against Dr. Finn’s advice and continues to seek answers regarding the kidney Josslyn received, oh-so many years ago. Still, Dr. Obrecht sets up a roadblock for her. Carly then sneaks onto Obrecht’s computer, desperate to find out who was working at GH the day his daughter got the kidney. Speaking of Finn…is he the one taking the meds from the 10th floor? Finn gets a new patient this week and receives information on another…could Josslyn be sick?

You may not want to miss out on Friday’s episode. Despite Carly’s pleading, an upset Sonny decides to take some action. Chaos erupts at the Port Charles Police Department…will Carlos make a run for it?

Griffin and Anna commemorate the anniversary of Duke’s death. Jordan continues to be jealous of Anna’s bond with Andre while Carlos threatens Paul. Anna confronts Alexis and Julian as it relates to representing Carlos. Hayden gets a less-than-warm welcome home from Nicholas when she returns from FBI custody. Anna is on the verge of falling apart…who will keep her in check — Andre or Griffin? Lulu and Dante review what options they have. 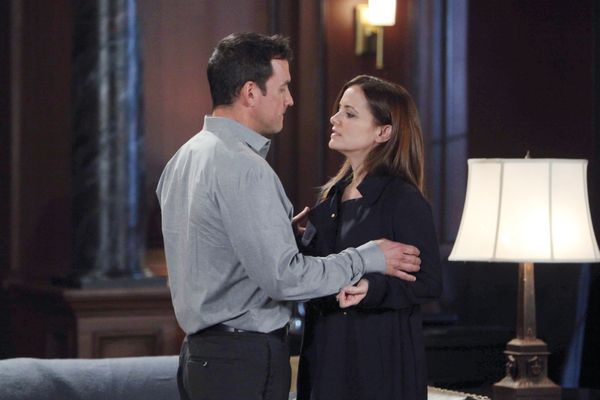