The Big Bang Theory has become one of the most iconic series of the decade, and along the way has made some of its stars the most well-known and beloved TV actors of their time. The Big Bang Theory has a lot of stars, but it definitely would not be the same without Rajesh Koothrappali who is expertly played by Kunal Nayyar. Aside from now being one of the highest-paid actors on one of the biggest sitcoms, Nayyar isn’t one to thrust himself in the spotlight, and there are still many things fans don’t know about him! Check out 7 things you didn’t know about the actor:

Kunal Nayyar was born in Hounslow, London, to a Punjabi family on April 30, 1981. Although he was born in England, when he was only four years old, Nayyar’s family moved to New Delhi, India where he was raised. Growing up, he became interested in sports and played badminton for his school before moving to the United States in 1999 to attend the University of Portland.

Although Nayyar first attended the University of Portland in Oregon in order to get his Bachelor of Science in Finance, it is where he ended up finding his love for acting. He began taking acting classes and appeared in school plays, and eventually took part in the American College Theater Festival and decided to pursue acting as his career. He went on to attend Temple University in Philadelphia and received a Master of Fine Arts in acting.

Moving from New Delhi, India, to Portland, Oregon, was a huge change for Nayyar, and although he said he was “lonely at first,” he said the people were “accepting and loving and open-minded. When you have a safety net it allows you to take risks.” Unfortunately, after deciding to pursue acting, he still had to make ends up meet and ending up taking a job cleaning toilets at the school, but despite how awful the job could be at times, he needed the money. “It’s disgusting. But I made it into a game, which is something I do, especially when I have to do something I don’t really want to. Instead of focusing on everybody’s poop and how disgusting my job was, I’d get down on my knees with my cleaning supplies and I’d start the job and sometimes I’d start wondering, ‘Hmm, that’s interesting; what did they have for dinner?'”

Back in 2015, Nayyar went from superstar actor to a published author with the release of his book, “Yes, My Accent is Real: And Some Other Things I Haven’t Told You.” The oddly specific title actually stems from the fact that over his career, many have accused the actor of faking his accent. “I’ve lost count of the number of times I’ve had to tell people that my pure Delhi, St. Columba’s School accent is the real deal, not something I consciously practice to sound more ‘Indian’ or to make fun of Indian accents — like, say, the Apu character in ‘The Simpsons,'” he explained.

After a couple of small roles, Nayyar’s life was turned around when his agent heard about the role of a scientist for a CBS pilot back in 2006, and urged the actor to audition for the role. Now, Nayyar has starred as Raj for nearly 10 years on The Big Bang Theory which has become one of the biggest sitcoms to ever air, and as it turns out, the actor says he has some similarities with his beloved character. “Sometimes I’ll be sitting with my friends; I’ll say something Koothrappali-esque and make a face. There is a lot of Koothrappali in me as a human being. A lot of mannerism, humor, mischievousness, my innocence. So I don’t know if I bring him home so much as I bring myself to work.”

Although Nayyar likes to keep his private life out of the spotlight, he opened up about his relationship with former Miss India Neha Kapur in his book of essays entitled “Yes, My Accent Is Real.” He revealed that the pair were initially supposed to be set up when he returned home for Christmas in 2008, but after a week, they never met. As fate would have it, they eventually met at the opening of a bar. “We talked about our childhoods in New Delhi. Gradually, I think she could tell I was not a creep and she began to open up. There was something beautiful about the rawness of her emotion. I had known her for two hours, and I was getting hooked,” he wrote. Years later the pair were married in a week-long wedding celebration in 2011, tying the knot on December 22, 2011 in New Delhi.

From cleaning toilets to working for $7 an episode, Kunal Nayyar has come a long way in his career. In 2004, he made his professional on-screen debut in the 2004 film S.C.I.E.N.C.E. and had his “big break” playing a terrorist in one episode of NCIS. After struggling to find more roles, Nayyar fatefully landed the part of Raj on The Big Bang Theory. He has now also appeared in series such as Fantasy Hospital and Sanjay and Craig, as well as offered his voice for animated films such as Ice Age and Trolls, and thanks to it all, he now has an incredible estimated net worth of $45 million. 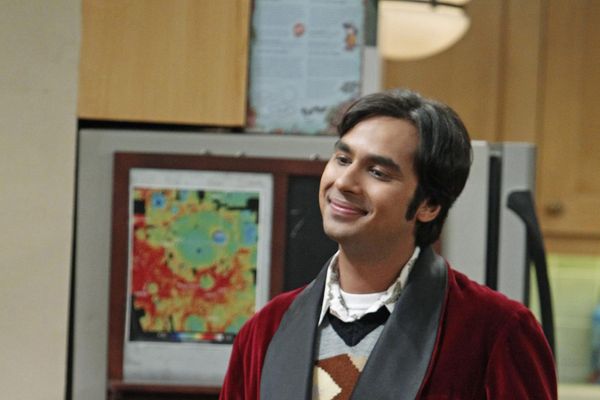