Over the years there has been an onslaught of family sitcoms, but one of the best was Reba which ran on The WB for five seasons and The CW for one before going off the air. Over the years it amassed a large and loyal fanbase who would have been more than happy to see the series continue on well past 6 seasons thanks to its excellent writing and a perfect cast pulling it all together. Reba McEntire proved she really is a comedic genius and talented actress as well as an amazing singer, and was supported by a cast including Christopher Rich, Melissa Peterman, Steve Howey, Scarlett Pomers and JoAnna Garcia. All these years later, take a look back at the fantastic series with these 7 things you probably never knew about Reba.

It only makes sense for a series starring Reba McEntire to be called Reba, right? Well it seems that isn’t how it started out. Originally Reba’s main character was supposed to have the name Sally, but Reba quickly convinced executives that because of her loyal fanbase from her singing career, calling the show Reba would help fans connect to it. In fact her character’s name ended up being Reba Nell Hart and Reba’s real full name is Reba Nell McEntire.

For a whole lot of the show, the basis was on Reba dealing with the fact her husband Brock has left her to marry his young, naive and ditzy dental hygienist Barbra Jean who he had an affair with. A lot of the comedy revolves around Reba “hating” Barbra Jean, known as B.J., while B.J. considers Reba her best friend. Despite all of this the two actresses Reba McEntire and Melissa Peterman really are best friends in real life.

For all five seasons that Reba was placed in The WB’s Friday night lineup, the series set a new all-time viewership record for any program on the network’s Friday night lineup. Meanwhile the premiere on the The CW on Sunday made it the highest rated sitcom on the network and as a result of its placing before 7th Heaven, 7th Heaven saw a season high of 4.51 million viewers. It also beat out all others in repeats during The CW’s very first season from 2006-2007, and when ratings for the summer drama Hidden Palms plummeted, Reba re-runs were added to the CW’s schedule in June of 2007 and instantly became the most-watched program of the night, and later in the summer the Reba re-runs became the most-viewed program on the CW.

Halfway through Reba‘s sixth season, rumors circulated that “the back nine” Reba episodes, or the final episodes, had been ordered by the network which would have given Reba a full-season order. Then, abruptly in January 2007 during the TCA Press Tour it was announced that the series had been cancelled and there was not going to be any “back nine” episodes ordered. The news came as a shock to fans and the finale garenerd 4.4 million viewers, and soon rumors began that the show was going to be picked up by another network; however, when stars JoAnna Garcia and Steve Howey signed on to new CBS and Fox shows it was clear Reba would not continue on any network. In May 2007, 20th Century Fox TV president Gary Newman stated that he regretted how the show was handled and was sure it could have been a hit for many more years on CBS or ABC.

Before the cancellation, Reba was already hitting a rough patch that it was luckily able to get through. Reba was actually originally cancelled when The WB and UPN merged into The CW Television Network in 2006. Then, abruptly on May 17, 2006, The CW made the decision to actually renew Reba instead which was when the show was paired with 7th Heaven on Sunday evenings. The success of Reba was more than the network could have imagined as it quickly surpassed hit dramas such as Supernatural, One Tree Hill and Veronica Mars.

Fans were well aware when one of the show’s stars, Scarlett Pomers, who played Reba’s middle child, Kyra Hart, was absent for almost all of season five, appearing in only two episodes; however, her absence was not really addressed. As it turns out her absence was actually because she had to enter treatment for an eating disorder which had seen the 5’2″ actress drop down to 73 lbs. Pomers appearance drew concern from her castmates when she showed up for filming season five and it was with good cause because Pomers was barely eating and exercising for up to six hours a day in secret. Despite the severity of her condition, once she had received help she returned to the show, and a joke about her extended absence was even made. In Pomers’ first episode back, Reba asked, “Where have you been?” to which her character, Kyra, replied, “I went to get something to eat.”

Fans absolutely loved the romance between JoAnna Garcia’s character Cheyenne and Steve Howey’s character Van, and as such, the two went on to star in a music video for Reba McEntire and Kenny Chesney’s song “Every Other Weekend.” The two were not necessarily in character, but they did portray a divorced couple who share custody of their children and have to exchange them “every other weekend.” 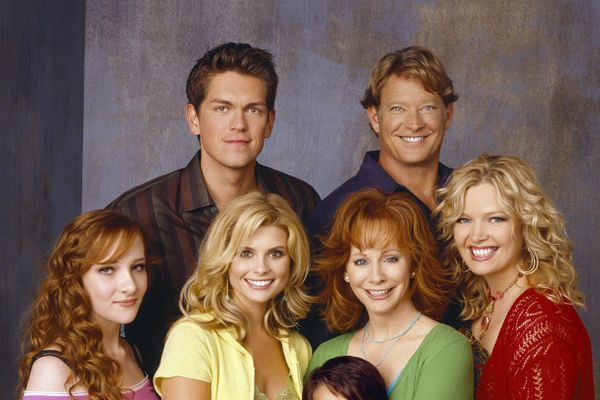 Cast Of Reba: How Much Are They Worth Now?