When a couple of dozen men from all over the country – with different backgrounds, outlandish personalities, and conflicting romantic methods – come together to woo the same woman at the same time, all while living together in one ginormous mansion, sparks are definitely going to fly. Frankly, if things didn’t get a little (or a heck of a lot) over the top drama-wise, we’d be pretty darn disappointed. That’s why there is inevitably one of two (or more) villains that crop up each season, some who deserve the title more than others, and a few who probably don’t deserve the hate at all.

Chad Johnson has had quite the ride when it comes to shows in the Bachelor universe. Vying for JoJo Fletcher’s heart on season 12 of The Bachelorette AND looking to make a connection on the third season of Bachelor in Paradise (with hints that he might be participating in an upcoming season of BiP, though not the upcoming controversial fourth season). During his time on screen he managed to not only put off viewers with his cringe-worthy drunken outbursts, he also… well (we guess we’re just going to have to come out and say it)… he pooped his pants. Ew! Ew! Eeew! However, nowadays, the dude who became (in)famously single is now in a relationship with model Zoe Baron, so perhaps he’s not as much of a villain as we first suspected. Maybe he’s just a wild kind of dude (who occasionally needs an emergency pair of underpants).

During his short time on season 11 of The Bachelorette, JJ Lane was pretty hard to handle. His arrogance was beyond annoying and, according to a video comedian Amy Schumer put out back in 2015 (yep, even *she* couldn’t put up with the dude), JJ was also “missing charisma and humility and a sense of humor.” Oooh, ouch! However, in his defense, we have to say that he always tried to show total respect to Bachelorette Kaitlyn Bristowe, which is more than we can say for some of the other villains who appeared on the show throughout the years. So, is JJ really a villain? Perhaps not. Perhaps he’s just lacking charm in a very noticeable (and obviously romantically-stunting) kind of way.

Ben Scott was never exactly a fan fave and has mostly faded from the Bachelor universe since appearing on season nine of The Bachelorette when he attempted to win the heart of Desiree Hartsock. The single father was certainly not among the most popular fellas among the group of contestants, but he didn’t necessarily do anything bad other than angle for more time with the Hartsock herself (which, ya know, is kind of a goal of ALL of the men). Frankly, he just failed to win folks over, which earned him a spot among the series’ villains despite the fact that many other people on the series deserve the title MUCH more than Ben Scott.

Ed Swinderski may not have been seen as a villain during the fifth season of The Bachelorette, but after the show aired, cheating rumors became rampant. With the couple eventually calling off their (seemingly doomed) engagement in July of 2010, it’s easy to cast Ed in the role of the villain. Though he may certainly deserve the title if the infidelity talk was true, considering things were never really confirmed and the truth has never been told, it might be best to hold off judgement in this particular situation. These days, Swinderski is a happily married man, tying the knot in July 2015 to Natalie Bomke, the anchor and host of Good Day Chicago.

You can’t mention Adam Gottschalk without Adam Jr. and that’s just creepy. That’s because Adam Jr. isn’t a child, but a fake mini-me (AKA dummy). As freaky as it was unexpected, viewers didn’t know what to think of Adam Jr. and, frankly, neither did Rachel Lindsay. While she gets all of our respect for not simply whipping that nightmare-come-to-life into the fire place as soon as Adam whipped it out, the whole situation was almost too much to handle. Which is probably why Rachel ended up sending the dude (and his little friend) home A.S.A.P. However, just because he has an unusual (and kind of weird) hobby doesn’t necessarily make the man a villain.

Lucas “Whaboom” Yancey will undoubtedly go down in The Bachelorette history as one of the quirkiest contestants to ever take on the romance reality TV show (seriously, Rachel Lindsay landed with quite a few fellas who had unexpected quirks and super strange traits). While Lucas undeniably rubbed plenty of people the wrong way (including Rachel herself), he stayed true to his WHABOOM-ness right up until the very end. Frankly, he even recorded a performance that was just as wacky as you’d expect for the Men Tell All reunion which, unfortunately (or maybe fortunately) was not aired. Luckily for you (or unluckily for you) the entire thing was recorded by someone who was in the audience and shared with the entire world. Get ready to cringe (HARD!) at this song that will prove that Lucas is less of a villain and more of an, er, unique character.

Nick Viall may have firmly established himself as a somewhat charming underdog, apparently aiming to earn a record for the most times someone could get close to love before heading home broken-hearted, having competed on The Bachelorette not once, but twice. And while some saw him as a man who was unlucky in love, others saw him as having shades of an unexpectedly charming villain. A keen observer (and shameless mimicker) of those around him, he didn’t always leave people with the best impression. However, we have to admit that these days, as he enjoys his engagement to Vanessa Grimaldi after appearing as The Bachelor himself, he seems less like a villain and more like a man in love. 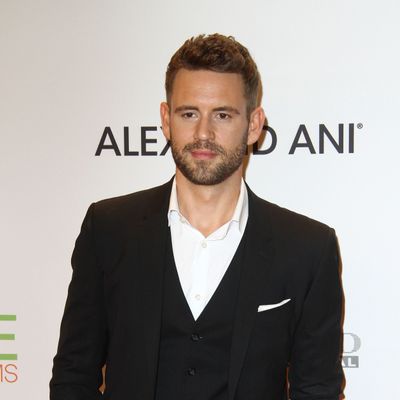