Nick Cannon was a celebrity before he met and married Mariah Carey. He was a rapper, a television personality, a host and an entrepreneur; however, it his relationship with the iconic singer that shot his career into another stratosphere. Now, even though he and Carey are divorced, he’s a bona fide star with a hosting gig on America’s Got Talent. He’s come a long way since he first got into the entertainment business as a teen. In celebration of his birthday, we have 8 things you didn’t know about Nick Cannon:

Nicholas Scott Cannon was born on October 17, 1980 in San Diego, California, to Beth, an accountant, and James, a motivational televangelist. His parents were both teenagers when they had him, so his paternal grandfather was the one who primarily raised him. He grew up in a really rough neighborhood, but he avoided gangs by spending most of his time playing basketball.

When he was 11, Nick got his first gig doing stand-up comedy on his dad’s local cable access program. “He told me to write up something and said, ‘If it’s good, I’ll put it on my show,’” he said. “I guess he was impressed.” After graduating from Monte Vista High School in Spring Valley, California, in 1998, he got another break when he scored a slot as a warm-up comedian for Nickelodeon’s studio audience in L.A. By 2002, he had his own slot on the network, The Nick Cannon Show.

The stand-up comic was part of a rap group when he was a teenager called DA G4 Dope Bomb Squad with his friend Steve Groves. Even though they opened for artists like Will Smith, LFO, 98 Degrees, and Montell Jordan, they never ended up taking off. In 2001, he signed with Jive Records and began to record songs for the Nickelodeon programs Jimmy Neutron: Boy Genius and in 2003 he released a self-titled debut album, which featured the hit “Your Pops Don’t Like Me (I Really Don’t Like This Dude).” The album ended up peaking at No. 15 on the U.S. R&B charts. In 2013, he released a single, “Me Sexy,” and announced that he was working on a new second studio album called White People Party Music. In 2014, he released the album’s second single “Looking for a Dream.”

Cannon dated Christina Milian from 2003 to 2005. They met on the set of the movie Love Don’t Cost a Thing, but broke up because he had cheated on her with multiple women. He dated Kim Kardashian in 2006, but broke up with her because she lied to him about having a sex tape. He was engaged to Selita Ebanks in 2007 and had a brief fling with Nicole Scherzinger in 2008. Then, after dating Maria Carey for only a couple of months, he married her at her private estate on Windermere Island in The Bahamas. They have two children together, twins Monroe and Moroccan, but the couple separated in 2014 and divorced in 2015. Now he’s reportedly dating TLC singer Chilli.

In 2012, the television personality was diagnosed with the autoimmune disease lupus nephritis after he was hospitalized first for kidney failure and then for blood clots in his lungs. As a result of the diagnosis, he had to change his diet (less sodium and more water) and make sure to get at least six hours of sleep a night, which meant leaving his gig at the morning show at 92.3 NOW FM.

The America’s Got Talent host lost his virginity when he was 13 in junior high to a girl who was in high school. “I was always a little attracted to women that were a little older than me. I even lost my virginity to an older lady… I actually ended up crying at the end of the whole ordeal,” he said. “She was in high school and I was in junior high…we were in a sleeping bag…I said we should change positions, she was like ‘just get off me!’ She ran into the bathroom with all of her friends and they were in there laughing…I vowed from that day forward no woman would ever laugh at me in the sack again and that’s when the ‘Cannon’ was born!”

He is attending Howard University. According to him, college has been his lifelong dream. “It’s something I’ve always wanted to do, and I truly feel like it’s the next stage in my life,” he said. “Entertainment is outstanding but I truly want to utilize my voice, I want to be a part of the community, and I’m always encouraging young people and being an advocate for education, so I need to make sure I get mine first.” He doesn’t plan to just stop a bachelor degree either. “I’m going all the way to get [my] PhD,” he said.

Even though Cannon and his ex wife Mariah Carey weren’t virgins when they met, they decided to wait for marriage before they did the deed – mostly because that’s what Carey wanted. “On our wedding night, honeymoon style, in the Bahamas. That’s a real woman there, make you wait, til you got married. Seriously, 100 per cent. We didn’t [know if it would be good]. The first time I made love to my wife was on our wedding night,” he said. 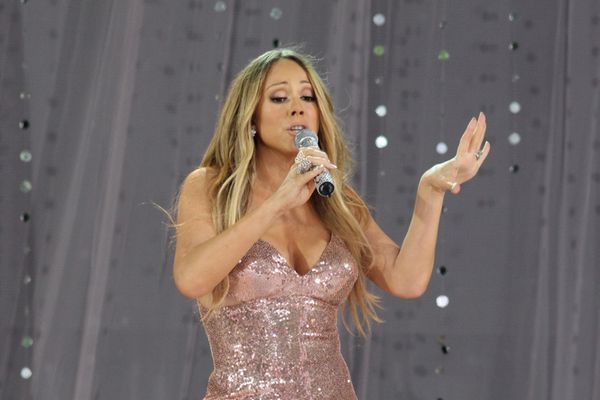