Lauren Graham’s role as Lorelai Gilmore on the hit show Gilmore Girls is what really launched her career. Even though she’s continued to have success thanks to her role on the TV series Parenthood, for many of us, she’ll always be fast-talking Lorelai. Now that Gilmore Girls has a reboot debuting on Netflix on November 25 and Graham has a book coming out on November 29, many of us are dying to know more about the actress behind one of TV’s favorite moms, so here are 9 things you probably didn’t know about Lauren Graham:

The Gilmore Girls star met her current beau Peter Kraus in 1995 when they were on an episode of Caroline in the City together. According to her, the timing for them just wasn’t right, so they became good friends who kept in contact through the years. When they began working together on the set of the show Parenthood in 2010 – where they played brother and sister – they officially started dating and have been together ever since.

Lauren Helen Graham was born on March 16, 1967 in Honolulu, Hawaii to Donna, a fashion buyer, and Lawrence, a candy industry lobbyist. When she was five years old, her mother left the family to move to London, England, to pursue a singing career, so Lauren’s father was the one who raised her. She has a half sister and a half brother from her father’s second marriage and a half sister in England, Shade Grant, from her mother’s second marriage.

She initially enrolled in a performing program at New York University, but switched to Barnard College, which is a part of Columbia University, because she wanted a more well-rounded education. Although she enrolled in their theatre arts program, she ended up majoring in English. She also has a Master’s of Fine Arts Degree in Acting Performance, which she received from Southern Methodist University.

After getting her M.A., she moved back to New York City to start her acting career, but she had difficulty finding professional acting work, so she worked as a waitress at an improv comedy club at night and then at the luxury department store Barney’s during the day, and she was also a tutor teaching SAT test prep for The Princeton Review.

Before she landed the role of fast-talking, single mom Lorelai on Gilmore Girls, she was in several failed television sitcoms, including Townies (which co-starred Molly Ringwald and Jenna Elfman), Lush Life (which also featured Lori Petty and Karyn Parsons) and M.Y.O.B. She also landed regular guest starring roles on shows like 3rd Rock from the Sun, Caroline in the City, Seinfeld and Law & Order.

In 2009, the brunette beauty landed a starring role on in the ABC comedy pilot The Bridget Show (also known as Let it Go) playing a talk show host/self-help guru who doesn’t follow her own advice after a breakup. Unfortunately, after critics screened the pilot, the show was not given a series order and it is believed to be because the content was a little dark.

The Parenthood actress briefly dated Friends star Matthew Perry back in 2002. Since the relationship ended, they have remained good friends. Graham even appeared in his TV show The Odd Couple as one of his character’s ex girlfriends. In 2008, Perry and Graham were rumored to be giving their relationship another go. They were spotted at Ellen DeGeneres’ 50th Birthday Party holding hands, but nothing seemed to come of it.

The television actress used to room with Nashville star Connie Britton back in 1999. “We lived in an empty house that we weren’t supposed to be living in,” she told Andy Cohen on Watch What Happens Live. “We had no furniture and all we ate were Rice Krispies Treats.” She also joked that Connie used to leave her dishes in the sink and secretly borrowed Lauren’s shoes!

Graham has a book coming out on November 29 called Talking as Fast as I Can, but it isn’t the first book she’s written. In 2013, she wrote Someday, Someday, Maybe: A Novel, a fictionalized account of her experiences on the New York City acting scene during the mid-‘90s, which became a New York Times best seller. She even signed a deal with Warner Bros. Television and Ellen DeGeneres’ production company A Very Good Production to adapt it into a TV series and she will writing the script. 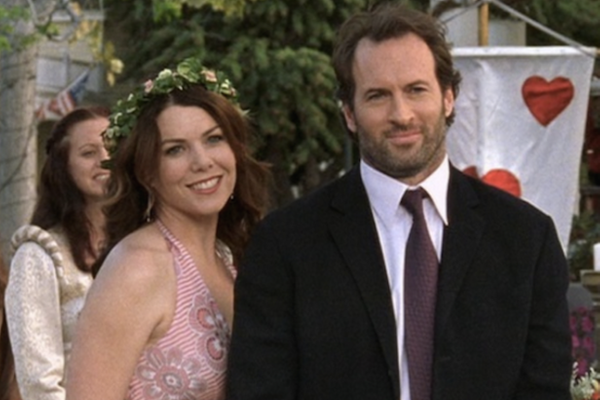