Since beginning its run in 2010, Hawaii Five-0 has gained millions of fans both new, and of course, those who loved the original series. A huge draw for the show has been the stars, which includes Alex O’Loughlin as Steve McGarrett. The actor is handsome, charming and talented, but those are things his fans already know about him after watching him on their screen for years. Like many stars, O’Loughlin prefers to remain out of the spotlight despite his leading role on one of TV’s biggest series, so there is always more to learn about him! Here are 9 things you didn’t know about Hawaii Five-0‘s Alex O’Loughlin:

Before he was Steve McGarrett, Alex O’Loughlin was close to taking on another iconic role: James Bond. After Pierce Brosnan exited the role, it turns out O’Loughlin was one of the top candidates for being the next James Bond, but only until they found Daniel Craig for 2006’s Casino Royale.

As an adult, O’Loughlin has been diagnosed with both Attention Deficit Disorder ( ADD) and Obsessive- Compulsive Disorder (OCD) and while he is dealing with both now and is rarely affected by his OCD, it went undiagnosed during his childhood. “I still have ADD. It’s something I’ve learned to live with. It affects people in different ways. It affected my learning when I was younger and I was never medicated for it. It was something that did make me feel like I was different and apart from everyone, made me feel isolated. Every girlfriend I’ve ever had has had a moment when they’ve gone crazy at me because they’ll say something and, literally, two or three minutes later I’ll respond. People think I’m rude or ignoring them but I’m not at all, I retain everything. It’s just the way my brain chemistry works. I’m actually a really loving, attentive person,” he told GQ. As for the OCD, the actor has recalled that it used to take him hours to just tie his shoe, but not anymore. “If I get OCD about something, I am like, ‘Oh my God, I have to do it.'”

Alex O’Loughlin was born on August 24, 1976 in Canberra, Australia, where he lived with his parents and his younger sister, Jennifer. When Alex was only a few years old, his father, a physics teacher, and his mother, a nurse, divorced meaning Alex spent much of his childhood traveling between his dad in Sydney and his mother in Canberra. In 1999, he had found his passion for acting and enrolled in the National Institute of Dramatic Art (NIDA) and graduated in 2002 with a Bachelor’s of Dramatic Arts.

After graduating from NIDA, O’Loughlin began his career in Australian TV and film before he moved to L.A. to pursue Hollywood stardom. “Whether or not I would have admitted it at the time, what I wanted to experience was fame. I wanted to make some money, but I wanted to really just be in the running at the higher level. I wanted to be on billboards and I wanted people to go, oh, that’s that guy,” he said of his initial intentions of becoming an actor. Of course, as the star of Hawaii Five-O, he has definitely found what he was looking for and has realized it isn’t what he thought. “I think that was the drive but I don’t know why because I hate celebrity. The minute I got a taste of it, I was like, oh, this has nothing to do with anything. I think for me, it was important to go to the heart of all that stuff and see it from close up to realise that that wasn’t what I wanted.” Starting out in Hollywood, O’Loughlin landed small roles in movies like The Holiday and August Rush before gaining traction in TV with roles in The Shield and Moonlight.

There is no doubt that Alex O’Loughlin is a multi-talented man, but he has one surprising skill — juggling. “I can juggle. I was bored one summer as a child and I taught myself to juggle. I started with ping-pong balls, and then I moved on to walnuts. I can juggle anything.”

On top of all of the things the actor is skilled at including acting and juggling, he is also a pretty good fisherman. “I’m a fisherman. I’ve always loved fishing. I grew up fishing for trout. I’m not the best fly fisherman, but I can fly-fish, because I crack a whip. I learned to crack a whip as a boy…I have skills, mad skills,” he said of his fishing expertise. His other talents include surfing with his co-star and friend Scott Caan, and he can also cook as the star has hinted he has a special meatball recipe.

As well as being an actor, O’Loughlin has always been athletic and did training in both Kung Fu and Tai Chi to prepare for his role in Moonlight which then translated to Hawaii Five-O. While he prefers to do as much of his own stunt work as possible, he has paid the price and suffered many injuries including herniated discs in his neck, nerve damage, torn shoulder muscles and torn bicep tendons. Unfortunately, one particular shoulder injury led to the actor having to step away from the series and seek treatment for an addiction to prescription pain medication.

In 1997 when O’Loughlin was only 20 years old he welcomed his first child, a son names Saxon with his then girlfriend. He has since refused to speak about his son, who lives with his mother in Sydney, in the media. In 2011, O’Loughlin began dating model and surfer Malia Jones after the pair met in Hawaii while he was filming his hit show. In October 2012, the two welcomed their son, Lion, who joined O’Loughlin’s son Saxon and Jones’ son Spike from a previous marriage. On April 18, 2014 the stunning pair married in Hawaii.

After moving to Hawaii for his role on Hawaii Five-O it is safe to say the actor fell in love with everything to do with the islands. “I’m blessed into these islands. I’ve got a [Hawaiian] name, my children have Hawaiian names, I’m married to a Hawaiian girl,” he said of Hawaii becoming such a big part of his life. He also revealed that he decided to make it his permanent home and even built his house himself with some friends from Australia. “It holds incredible significance to me. I don’t ever want to leave it,” he said while adding, “I don’t want to go back to Hollywood. I don’t know what I want to do. I don’t know if I want to keep doing this. Yeah, maybe [I would give up acting]. I don’t know. I’m just being honest.” 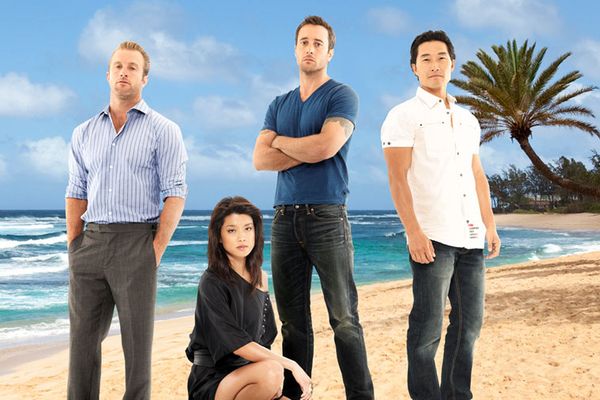