Kristen Wiig is a now a bona fide star thanks to her brilliant turn in Bridesmaids, but it wasn’t that long ago that she was slugging away with a series of supporting roles in comedies like Knocked Up, Adventureland, Whip It and Paul. Now that she’s an international star, she still doesn’t identify as being a celebrity. In fact, she does her best to keep her public and private life separate. We’ve done a little digging and we’ve found 9 things that you probably don’t know about the notoriously private actress:

Kristen Caroll Wiig was born on August 22, 1973 in Canandaigua, New York, to Jon, who ran a lake marina, and Laurie, an artist. She has one older brother, Erik, who is mentally disabled. When she was three, she moved with her family to Lancaster, Pennsylvania, and then after that to Rochester, New York, when she was 13. Her parents divorced when she was nine, so she and her brother lived with her mom.

The Bridesmaids star didn’t do any performing until she was in her late 20s. She attended community college in Rochester and then enrolled at the University of Arizona, where she was majoring in Art. While there, she discovered that she had a talent for acting when she took an acting class to fulfill a program requirement and her teacher encouraged her to pursue acting.

As a college student, she took a summer job at a plastic surgery clinic, drawing client’s post surgery bodies; however, the day before she was set to start, she decided to drop out of school and move to L.A. to pursue an acting career. “It was the day before I was about to start. I was living in a house with three other girls, who were gone for the summer, so it was just me. I remember looking around and thinking, ‘I don’t want this to be my life.’ Then I looked in the mirror and was like, ‘OK, if you could do anything, what would it be?’ And I thought, ‘I would move to L.A. Just try to act.’ Even though I’d only ever taken one acting class. The next day, the Jetta was packed and I was gone, freaking out the whole way,” she told Women’s Health.

After relocating to L.A., Kristen had a series of odd jobs, like working on clothing displays at Anthropologie and handing out peach samples at the farmers’ market. She even had a job answering phones at a law office. She only lasted one day there. “Someone explained it to me. . . . ‘Okay-well-you-press-this-and-you-put-them-on-hold-and-you-have-to-trans­fer-them-through-this-thing-and-then-you-have-to-press-these-two-buttons-and-press-0-0,’” she said.

The Friends with Kids actress co-wrote the film with her friend Annie Mumolo after Judd Apatow suggested that she write something that stars her. “When we wrote the movie, we didn’t say specifically what kind of movie we wanted it to be, or even the tone. We just sat down and wrote something that we thought would be fun to make and that had good, juicy roles for women,” she told TimeOut.

During college, she was terrified of public speaking. Because of this fear, she didn’t think acting was an option. “I was terrified,” she said. “I don’t really like talking in front of groups of people. Through high school if ever I had to give a speech, I would try to get out of it or not go to school that day… But I took the class, and I liked it, and the teacher was really encouraging for me to keep doing it.”

Off-screen the former Saturday Night Live actress is friends with her Bridesmaid co-stars, Maya Rudolph, Wendi McLendon-Covey and Melissa McCarthy. They all met over a decade ago at a mutual friend’s bridal shower that was held at McCarthy’s home. According to them, having been friends for so long actually made filming Bridesmaids easier.

Before she was able to launch her movie career, Kristen belonged to the Groundlings, L.A.’s famed comedy troupe, which is where she honed her improv skills. It was while she was there that she first got the idea for the overenthusiastic Target Lady. While she was with the Groundlings, her manager encouraged her to send in an audition tape to Saturday Night Live and that’s how she ended up getting an audition and then a job on the show. She was on SNL from 2005 to 2012.

The comedic actress is currently dating Avi Rothman, who is a writer, actor, producer and director who, like Kristen, also trained at the Gondlings theatre. Before that she was dating Strokes drummer Fabrizio Moretti. They called it quits in July 2013 after 18 months of dating. She was also married to actor Hayes Hargrove from 2005 to 2009 and, after they broke up, she was in a long-term relationship with Funny or Die producer, Brian Petsos. 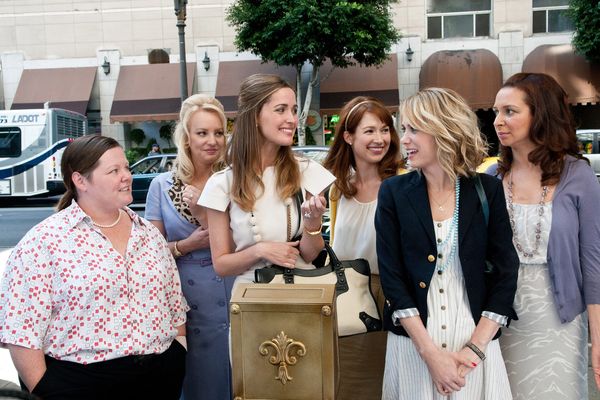 Cast Of Bridesmaids: How Much Are They Worth Now?