Miss Congeniality was one of those films that completely exceeded expectations. Even though it wasn’t popular among critics, it was a huge hit at the box office. The film grossed $212 million worldwide and earned a sequel! Oscar-winning actress, Sandra Bullock starred in the action comedy which was responsible for one of her most popular characters, FBI agent, Gracie Hart. Even though it’s been 17 years since the film was released, it remains just as popular today as it was back then, so here’s at look at 9 things you probably didn’t know about Miss Congeniality!

Gilmore Girls actor Edward Herrmann was in the original cut of Miss Congeniality. He was cast in the role of Gracie Hart’s father. The actor can be seen in the film’s first trailer when the two are at a wedding and he turns to Gracie and says, “honey, are you a lesbian?” to which she replies, “I wish.” Sadly, this scene and Herrmann’s entire cameo were cut from the final version of the film.

8. Sandra Did Her Own Stunts

Sandra Bullock’s role in Miss Congeniality was fairly action-packed and involved a lot of stunt work, but she did almost all of her own stunts. She took combat training (for the scene where she wrestles Bratt) and learned how to handle a semi-automatic weapon. According to stunt coordinator Jack Gill, Bullock was a total natural. “She jumped right in. She picked it up really quick. She listens very well. She’s very athletic.” In the behind-the-scenes footage, Bullock said her most difficult stunt was walking around in heels! “The most difficult thing for me is to actually walk and talk with breasts that aren’t mine and six-inch stiletto heels. That’s my action. The leaping and jumping? That’s no problem. It’s the walking and talking with the breasts that’s going to be my…difficult part,” she joked.

In an interview for SMTV Live back in 2000, Sandra Bullock said she identifies more with the “pre-makeover” Gracie in the film which only took 30 minutes to prepare as opposed to the 2.5 hours it took to get her pageant look. They called the hair and makeup crew on set the “construction crew” because it was such a big job to convert her from one to the other! (Fun fact: Bullock wore a wig for the pre-makeover Gracie). She also said she would never enter into a pageant, but she did enter the Flue Cured Tobacco Queen contest in college and lost! Her talent was dancing “a little Bob Fosse number.”

The role of Gracie Hart was perfect for Bullock, who’s known to be very athletic and a bit of a tomboy in real life. During an interview on-set with ET back in 2000, Bullock revealed which scene she fought to cut from the movie — the swimsuit scene. “Reluctantly. That was a huge bone of contention for me. I was trying to get it written out so many times and it’s in the script,” she said. Bullock joked that prior to shooting the scene she did a lot of working out with friends in order to get in shape. The scene was filmed outside in San Antonio, Texas.

Similarly, with pageants in real life, each of the contestants had to showcase a talent on stage (how could we forget Gracie’s demonstration of self-defense). Heather Burns, played the character of Cheryl Fraiser, and for her talent, she had to learn how to twirl batons, which she did. But flaming batons was where she drew the line, so she had a stunt double. The woman who stepped in and took her place was Coral Noonan, a Ph.D. student at the University of Texas, where the scene was filmed, who also happened to be a twirler for the Texas Longhorns.

The “Miss United States” song that the women sing while riding on the bus that reads, “She’s queen of fifty states, she’s elegance and taste, she’s Miss United States” was written by a 6-year-old kid! The boy (now a grown man) is Clyde Lawrence. His father, Mark Lawrence, was one of the writers on the movie.

Michael Caine doesn’t typically appear in romantic-comedies, so it was a nice surprise to see him in Miss Congeniality back in 2000. According to Buzzfeed, the script had to be rewritten a number of times to even peak his interest. “It took some pretty major script rewriting to get Oscar-winner Michael Caine aboard. Nine originally planned parts were dumped to beef up Caine’s role sufficiently to nail his interest.” Once he was on board, his wife Shakira, who came in third place during the 1967 Miss World competition, gave him a few tricks to go off for his role as a pageant trainer.

Miss Congeniality starts with a restaurant scene where Gracie Hart screws up a mission for the FBI and is reprimanded for it. Afterwards, she goes back to her apartment to blow off some steam. This scene had no dialogue or instructions for Bullock to follow. The script simply said, “Gracie comes home and starts boxing.” She ad-libbed this entire scene like when she kicked the bed, then tripped over it, and struggled to close the microwave until she finally sticks a wooden spoon in it. 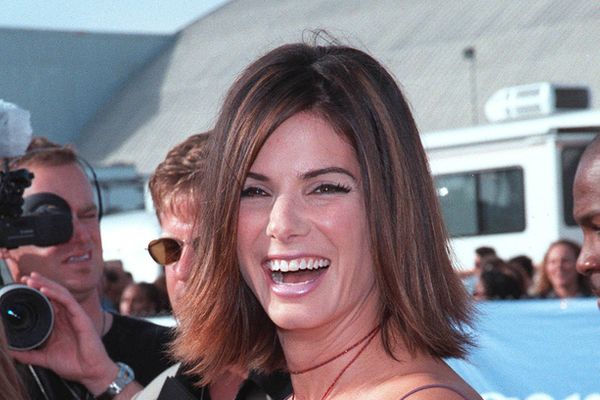