Cast Of Judging Amy: How Much Are They Worth Now?

Judging Amy was one of the most popular dramas on TV from 1999-2005 when it ran for six seasons. Following the life of Amy Gray who serves as a judge, fans got pulled into the stories of not only the family-related cases she served on, but also her own life as a divorced mother, as well as her social worker mother’s. The intriguing storylines and witty script was pulled off by an amazing cast full of a ton of talent. More than a decade after the show has come to an end, check out how the cast has fared since with this list of how much they are all worth now!

Estimated Net Worth: $800 Thousand. Kevin Rahm got his start in acting back in the mid ’90s and had many small roles on TV movies before making his way into one episode stints of better known series such as Pacific Blue, Star Trek: Deep Space Nine and Beverly Hills, 90210. In 1999 he moved up in his career with a starring role on the short-lived series, Jesse, starring Christina Applegate. A year later he landed the role of Kyle McCarty in Judging Amy, which is still one of his best known roles. After his stint, he appeared in many more series in single episodes and then landed bigger roles including as Lee McDermott in Desperate Housewives and Ted Chaough on Mad Men. He has most recently been seen in Bates Motel and Madam Secretary and is filming for the new Lethal Weapon TV series. Through it all, Rahm has made an estimated net worth of $800 thousand.

Estimated Net Worth: $1 Million. Dan Futterman began acting in the early ’90s and got his big break with a role in the 1996 film The Birdcage. He went on to have both film and TV roles, gaining more recognition with a role in the film Enough and then as Vincent Gray in Judging Amy. Futterman went on to appear in Will & Grace, Related, A Mighty Heart and Kill the Messenger, just to name a few. As well as acting, he also became a producer for films such as 2005’s Capote, and 2010’s In Treatment. Overall, Futterman now has estimated net worth of $1 million.

Estimated Net Worth: $1.5 Million. After graduating from the University of Southern California with a degree in Theater, Timothy Omundson began his professional acting career. His very first role was a small part on Seinfeld, and led to many more TV appearances before gaining recurring roles on Fired Up, Legacy, and Xena: Warrior Princess. In 2000, Omundson began in his role as Sean Potter in Judging Amy, and he also appeared in Swordfish, Deadwood, Mission: Impossible III, and Jericho. He was most recently seen in the new series Galavant, and has made a very respectable estimated net worth of $1.5 million.

Estimated Net Worth: $500 Thousand. Jillian Armenante has been acting for quite some after landing her first role in 1991, but she really gained recognition after appearing as Cynthia in the 1999 film Girl, Interrupted. That same year she started her role in Judging Amy as Donna Kozlowski which she held for 130 episodes of the series. Since, Armenante has been in many notable TV series in small roles as well as films such as Bad Teacher and The Dark Knight Rises. Most recently she is known as Nancy in the hit comedy series Fresh Off the Boat. With a lack of major roles through her 62 credits, Armenante has a net worth of $500 thousand.

Estimated Net Worth: $6 Million. Tyne Daly is a very well known actress who started her on-screen career in 1954’s Foreign Intrigue. She is best known for her roles in Cagney & Lacey, Telefon, The Enforcer, and of course Judging Amy, which she starred on for 138 episodes as Maxine Gray.  She has since appeared in Grey’s Anatomy, and Modern Family and will be in the next Spider-Man film slated for a 2017 release. As well as her on-screen career, Gray has also made a name for herself in the world of Broadway and, at 70 years old with 100 acting credits to her name, she has made a very impressive net worth of $6 million.

Estimated Net Worth: Unknown.  From 1998-1999, Karle Warren appeared on the series DiResta, and then became better known from 1999-2005 for her role as Lauren Cassidy on Judging Amy. Aside from those roles, she also provided voices for the hit animated film Lilo & Stitch, but her last acting credit was in 2010 in Crazy on the Outside. It seems Warren as more or less given up on an acting career, leaving her net worth unknown.

Estimated Net Worth: $500 Thousand. Marcus Giamatti began acting in soap operas such as Guiding Light and Another World before moving on to mainstream television and film. After many roles, he landed his most notable part as Peter Gray in Judging Amy. After the show, Giammati has appeared in shows such as Criminal Minds, Monk, The Mentalist, NCIS, The Young and the Restless and many more. His most recent role was in CSI: Cyber, and despite many roles, only has an estimated net worth of $500 thousand.

Estimated Net Worth: $1 Million. With a whopping 117 acting credits to her name, it is safe to say Jessica Tuck knows her way around the entertainment industry. Her first role came in 1989, and it was that same years she started her role as Megan Gordan on the soap opera One Life to Live which she appeared intermittently on for 120 episodes from 1989-2012. She is also known for roles in True Blood, Super 8, and Days of Our Lives, as well as Judging Amy, which she starred in as Gillian Gray. Her continuous work has paid off to the tune of $1 million.

Estimated Net Worth: $800 Thousand. Richard T. Jones has seen a lot of success in his career since he began acting back in 1992 in an episode of Renegade. His roles got bigger and bigger, appearing in Renaissance Man, Brooklyn South and of course Judging Amy as Bruce Van Exel. Some of his most notable roles since have been in things such as Terminator: The Sarah Connor Chronicles, Hawaii Five-O, Godzilla, American Horror Story and Narcos. Despite many roles in hit films and series, his lack of lead parts has left Jones with an estimated net worth of $800 thousand.

Estimated Net Worth: $15 Million. Amy Brenneman was the driving force behind Judging Amy, basing the series on the real life experience of her mother. Before acting, Brenneman majored in comparative religion, but while in school, she also started studying theater. She landed her first on-screen role in 1992’s Middle Ages, and then got a recurring role in NYPD Blue. She hit it big with a string of high profile movies in 1995-1996, starring in Casper, Heat, Fear and Daylight. After starring in Judging Amy, the talented actress starred in Private Practice and appeared in Reign and The Leftovers. She can afford to be picky with her roles thanks to her estimated net worth of $15 million. 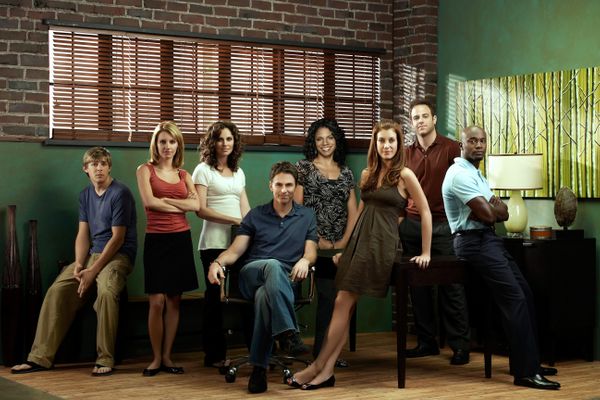