Lizzie McGuire holds a special place in the hearts of many people who grew up in the early 2000s and, while its run on TV wasn’t very long, it sure made its mark. First and foremost it introduced fans to the wonderfully funny and somewhat awkward Hilary Duff as the title character, and she has continued to keep her fans captivated for years as one of the only teen stars to not go off the rails. From 2001-2004, Lizzie McGuire ran for only two seasons but it was enough to spawn its own movie, and still inspire references today. Check out where the cast is now, 11 years after Lizzie McGuire went off the air.

Kyle Downes played the school’s “geek” Larry Tudgeman on Lizzie McGuire and, while he continued acting in shows like CSI: Miami and The L Word, in recent years he has turned his focus to behind the camera work of writing and directing.

Davida Williams is still best known for her character Claire Miller in the Lizzie McGuire show from 2001-2003, but she has continued acting. In 2004, she teamed up with Hilary Duff again for the film Raise Your Voice and in 2008-2009 Williams had a recurring role on As the World Turns. Now 29-years-old, has also appeared in a few TV movies, one as recently as 2015, and has been seen in a couple CollegeHumor Originals videos and has expanded a career into photography.

Hallie Todd has had quite the successful career in television, however she is still best known as Jo McGuire, the mom of Lizzie. Over the years Todd appeared in shows such as Brothers, Going Places, Murder, She Wrote, Sabrina the Teenage Witch and of course Lizzie McGuire and in 2010 she was even named one of the “Ten Best TV Moms of All Time” by CNN Entertainment. She has had only had three projects since the end of the show, but remains married to her husband of 24 years Glenn Withrow with whom she shares a daughter.

Robert Carradine has a whopping 119 acting credits to his name, so while some known him as Sam McGuire, dad to Lizzie, many recognize him from other projects as well. Carradine has continued acting and producing in Hollywood, most notably in the 2012 blockbuster Django Unchained. In early 2015 Carradine made headlines when he was charged with reckless driving on a Colorado highway that left himself and his wife in hospital and their car a mangled piece of metal.

For years Jake Thomas was known as the annoying kid brother of Lizzie, Matt McGuire. Now 25, Thomas has continued acting and appeared in Cory in the House from 2007-2008 over the course of several episodes. He has had many single episode appearances in other shows such as, Cold Case, House M.D., CSI: Miami, Ghost Whisperer and has recently appeared in quite a few TV movies, and starred in the YouTube series Storytellers.

Ashlie Brillault was laying out the groundwork for her career after starring in Lizzie McGuire and The Lizzie McGuire Movie has the bully/ mean girl, Kate Saunders. Since then however, Brillault dropped completely out of the spotlight and no longer acts.

One of the hearththrobs of the early 2000s, Clayton Snyder’s character Ethan Craft was more beauty than brains but that didn’t (normally) bother Lizzie one bit. Following Lizzie McGuire, Snyder took a break from acting while he attend Pepperdine University and played water polo. He ended up on the U.S. National Water Polo team and even played professionally in Europe. Then in 2014, the now 28-year-old made a huge resurgence in acting. Since his comeback in Famous in Flagstaff, Snyder has appeared in a ton of series as well as shorts, and already has a ton of projects lined up for the coming year.

Lalaine Vergara, 28, is well known as Lizzie’s best friend Miranda Sanchez for the duration of the show, and since the show has dabbled in both music and acting. She appeared in a scene of Easy A, and had a recurring role on the show Off the Clock from 2009-2013. In 2008 she also got herself in trouble with the law after being arrested for meth possession, but has had no other incidents and has continued to act.

Adam Lamberg was the adorable third best friend of Lizzie and Miranda, David “Gordo” Gordon. Following the show and movie, Lamberg appeared in two smaller budget movies, but in 2008 called it quits on his acting career. He instead went to University of California, Berkeley where he majored in geography and now the 31-year-old works at the Irish Arts Center in NYC and is completing his degree in Public Administration.

Then of course there is Lizzie McGuire herself, Hilary Duff. As her fans know, she has stayed consistently in the spotlight since the end of the show, going on to star in movies like A Cinderella Story, Raise Your Voice, and Cheaper By the Dozen 2, and guest starred on many TV shows including Gossip Girl and Two and a Half Men. The 28-year-old also married her now estranged husband Mike Comrie in 2010, and in 2012 welcomed her son Luca, during which time her acting career slowed down. As well as releasing new music, Hilary now also stars on the TV Land show Younger which is gearing up for its second season. 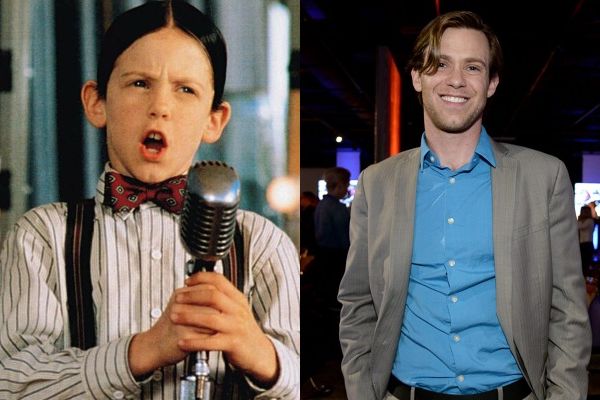