The ladies from Orange County are among the richest housewives in the entire franchise. It turns out, Orange County truly is a place of luxury and these women are living the lifestyle. Many of the women selected to appear on the show are successful business women while others have made a fortune from their relationships. Regardless, these ladies collect a big check for appearing on this reality series and many of the women who currently star on the show are worth over a million bucks! With an ever changing cast, this list is constantly revolving, but we’re focusing on the top earners of the main and current cast of RHOC:

Estimated Net Worth: $10 million. Kelly Dodd is the newest housewife to join The Real Housewives of Orange County. It’s only a few weeks into the series and she’s already made a huge splash and definitely impressed the ladies with her modern and beautiful four-story oceanfront home in Corona Del Mar. She describes herself as a stay-at-home mom, but she does have the position of being the COO of Kiss Me Mirrors, a company based out of Newport Beach, California. Kelly has definitely made her own money, but it doesn’t hurt that she’s married to Michael Dodd, the former president of LeapFrog Enterprises Inc. He’s since retired from that role and these two are now living off all the royalties! Today she’s worth an estimated $10 million!

Estimated net worth: $800,000. Tamra has made her fortune as a co-owner of CUT Fitness, which she owns with her husband, Eddie Judge. She is a long-time real estate agent for Ladera Realtor, and for her television appearances on shows like Who Wants to be a Millionaire and The Real Housewives Confess: A Watch What Happens Special. Judge earns herself a cool $350,000 per season of the Real Housewives of Orange County — not too shabby!

Estimated net worth: $5 million. Meghan King Edmonds is the third wife of former St. Louis Cardinals player and current Fox Sports Announcer, Jim Edmonds. She has earned her fortune by working as a model, a medical sales representative, and of course by appearing on the Real Housewives of Orange County. She is the newest cast member who joined for the show’s tenth season. Meghan was also exposed for having a secret divorce, from which she made out alright, splitting the earnings from the sale of their home and raking in a reported $225,000!

Estimated net worth: $7 million. Vicki has been quoted as saying, “I want the power and the money, and I want them both.” And this independent insurance agent, author, and original cast member of the Real Housewives of Orange County has done just that! She rakes in $500,000 per season of the hit reality show and has expanded her business, Coto Insurance and Financial Services, into Bellevue, Washington, and Atlanta. All of her success has spawned two books including More than a Housewife and Internet Life Insurance Selling Made Easy. She fulfills the type-A personality to a tee and is known for her “tell it like it is” approach.

Estimated net worth: $20 million. This holistic queen has done something right to earn her one of the top spots on our list. Shannon grew up in a wealthy family in Orange County, but made her claim to fame after she joined the cast of Real Housewives of Orange County for its ninth season. Fans were quickly introduced to her family and their marital problems from the get-go. The mother of three is a full-time stay at home mom who has been desperately holding her marriage to David Beador together. His infidelity was made public on the show after he cheated on Shannon in a sordid 8-month affair with another married woman. David Beador is the successful owner of a construction company that has earned the family their millions.

Estimated net worth: $25 million. This fashion designer joined the cast of Real Housewives of Orange County for its ninth season. She is no longer a regular cast member for the series, but still appears from time to time as a guest star. Lizzie has made a small fortune of her own as the former Miss Kentucky and when she started her line of exotic and luxury swimwear, Sun Kitten Swimwear. She accumulated much more after marrying Christian Rovsek, a real estate investor, philanthropist, and entrepreneur. This couple is the definition of the American dream with their two sons Preston and Kingston.

Estimated net worth: $30 million. Mrs. “fancy pants” has earned her keep by working as an actress on shows throughout the 1990s like Married with Children, Stark Raving Mad, and Men Behaving Badly. She married plastic surgeon, Terry Dubrow, and the couple have four children together. Heather took some time off from acting in order to focus on being a mom, but she recently returned to her roots and did guest appearances on Hot in Cleveland and Hawaii Five-0. In 2013, the Dubrows sold their mansion for a reported $16.4 million and just rebuilt a new 20,000 square foot mansion complete with a champagne bell, movie theatre, 14 bedrooms, a lap pool and underground garage. Terry stars on his own show called Botched and now a new series, Botched by Nature. Meanwhile Heather has her own podcast, a skincare line called Consult Beaute with her husband and a new book called “Dr. and Mrs. Guinea Pig.” These two are often referenced as the ultimate Real Housewives power couple! It’s no surprise she’s got one of the highest net worth’s of all the women on the show with a whopping $30 million. 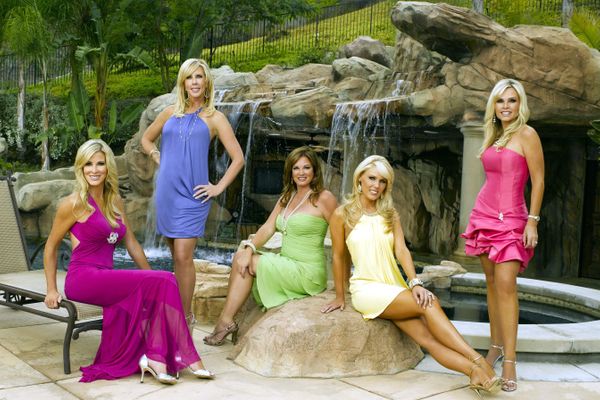