It was a dramatic week on The Young and the Restless, Days of Our Lives, General Hospital and The Bold and the Beautiful! Find out what you missed with your spoilers recap for April 13-17:

Monday on Y&R, Nick and Phyllis’ romantic getaway took an unexpected turn, and Nate upped his game with Amanda. Also, Victoria plotted against Adam; Nate and Amanda kissed; and Nick and Phyllis went all in.

Marlena and John intervened on Kristen’s behalf on Monday on DOOL, and a new Salem U worker appeared when Dasha Flynn joined the cast.

There were a few spoilers for GH fans on Monday. Michael was intimidated; Willow turned to Chase for comfort; and Nelle ran into Valentin.

As Shauna fell deeper in love on Monday’s episode of B&B, she surprised Ridge with a personal VIP experience. Also, Sally flipped when she realized Penny has been influenced by Flo.

Kayla informed Steve she is with Justin now on Tuesday’s episode.

There were be a few new developments for GH fans on Tuesday. Nikolas and Sonny faced-off; Jason stole time with Sam; and Willow was not able to stop worrying about Wiley.

Wyatt struggled with Flo’s decision to have Sally move out on B&B on Tuesday while Brooke discovered Ridge’s location as he and Shauna embarked on a wild night on the town.

Wednesday on Y&R, Sharon received comfort from Jack, Kyle and Summer enacted a plan. Also, Theo was set up to fail; Chelsea intervened in an argument; and Jack advised Traci.

On Wednesday’s episode of DOOL, Sarah made a shocking decision, and Will and Sonny discussed expanding their family. Also in that episode, Eric confronted Xander about the baby switch, and Jack encouraged Steve to fight for Kayla.

There were a couple of spoilers for GH fans on Wednesday. Finn outdid himself, Violet’s party was full of mischief and emotion.

Bill threatened Quinn on Wednesday on B&B while Sally worked to hide her true feelings about Flo.

Thursday on Y&R, Victor made an admission to Nikki, and Sharon thanked Rey for being there. Also, Abby asked Chance for help with Adam, and Rey planned an escape for Sharon.

Hope continued to struggle with her past as Gina on Thursday while Rafe received shocking news from Evan’s lawyer, Zoey, when GH’s Kelly Thiebaud appeared on DOOL.

There were a few spoilers for Thursday’s episode of GH. Sonny was surprised; Michael was reluctant to leave Wiley’s side; and Robert shared somber news.

Flo took her detective work to the next level in order to confirm her suspicions about Sally on Thursday on B&B, as she snuck a peek at Sally’s records on Dr. Escobar’s laptop. Also, Quinn refused to apologize to Katie for outing Bill and Brooke.

Friday’s episode of Y&R was one that first aired on October 2, 1991. The characters attended a lavish charity masquerade ball and an uninvited guest, who has murder on the mind, crashed the party and tried to exact revenge on Christine, Danny and Nina.

John broke the news to Marlena about Orpheus on DOOL on Friday.

B&B’s Friday episode will be a flashback to 2014 for Bill and Brooke’s Abu Dhabi wedding. 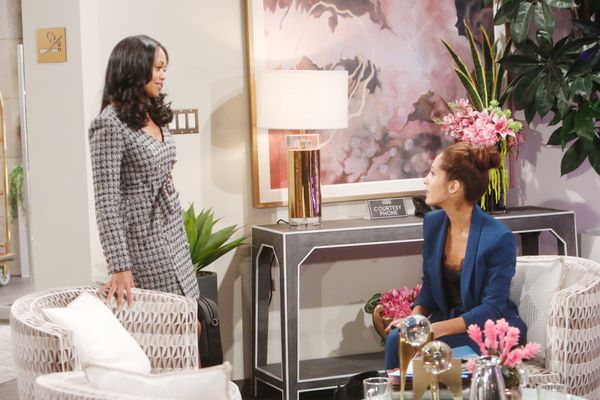 Young And The Restless Plotline Predictions For The Next Two Weeks (April 13 – April 24, 2020)