As always, it was a dramatic week on The Young and the Restless, Days of Our Lives, General Hospital and The Bold and the Beautiful! Are you wondering what you missed? Find out with this spoilers recap for April 6-10:

Monday on Y&R, Adam made his demands known while Tessa returned home. Also, Nick received a distressing call, and Victoria lashed out at Adam.

Nicole revealed to Eric the truth about Mackenzie on Monday’s episode of DOOL.

There were a few new developments on GH on Monday. Laura and Robert faced Cyrus down; Jason wanted to put a little distance between himself and Sam for a while; and Jordan was conflicted.

Sally agreed to treatment in exchange for something from Wyatt during Monday’s episode of B&B while Flo spotted evidence during a conversation with Dr. Escobar.

Tuesday on Y&R, Nikki ran out of patience for Adam, and Kyle crossed a line. Also, Victoria stood firm; Victor confided to Nikki that he’s innocent; and Jack put a stop to Kyle and Theo’s fight.

Kayla made a bold decision in order to get Steve back on Tuesday on DOOL.

There are a few spoilers for GH fans on Tuesday. Jason held his ground; Sonny had cause to worry about Brando; and Michael discussed his next move.

On Tuesday’s episode of B&B, Quinn did damage control in her relationship with Eric while Ridge and Shauna’s connection became undeniable while in Vegas together.

Kayla and Sarah encountered an unexpected complication during Steve’s surgery on Wednesday on DOOL.

There were a few new developments for GH fans on Wednesday. Bobbie received unsettling news; Nina tried to reason with Nelle; and Sonny worried about Carly.

Katie nixed Donna’s push for her to forgive Brooke on Wednesday’s episode of B&B while Brooke recalled romantic times with Ridge while trying to find him.

Thursday on Y&R, Phyllis put a stop to Abby’s new project and Sharon waited for news.

Justin confided in Jennifer about his fear of losing Kayla on Thursday’s episode of DOOL.

There were a few new developments on Thursday for GH fans. Peter wished Robert had a distraction; Dr. Obrecht received a visit; and Jax surprised Nina.

On Thursday on B&B, Shauna fell deeper in love and surprised Ridge with a personal VIP experience. Also, Sally flipped when she realized Penny was been influenced by Flo.

Friday on Y&R, it was a flashback episode from March 1993. Nikki was torn between Jack and Victor; Neil and Drucilla enjoyed their honeymoon; and John was floored when Jill reveals she’s pregnant.

Sarah received the shock of her life on Friday’s episode of DOOL while Steve woke up from his surgery, but there was a hitch.

On Friday on GH, there was a flashback episode.

Friday’s episode of B&B was a flashback, which was shot on location in France. 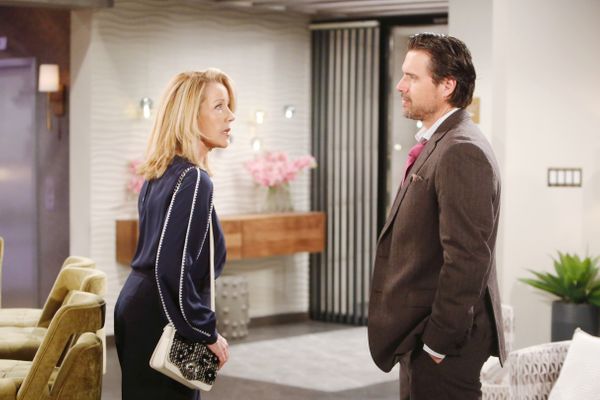