Dancing With The Stars 2019: All Celebrity-Pro Pairings For Season 28 (With Pics)

Season 28 of Dancing With the Stars kicked off on Monday, September 16 with a new set design, new stars and even some new pros! After an unusually long hiatus in which there was no spring season, ABC decided to add a little mystery to the new season after the celebrity-pro pairings were not announced when the celebrity cast was revealed in August on Good Morning America! Now, we finally know which celebrity is paired with which pro, and front-runners are already emerging. Check out the full cast and pairings for season 28:

Music legend Mary Wilson is the oldest competitor on the season at 75, and is teamed up with one of the newest and youngest pros, Brandon Armstrong. Wilson, 75, is one of the founding members of the R&B and soul group The Supremes alongside Diana Ross and Florence Ballard. She went on to release three solo albums and two best-selling autobiographies. Armstrong’s first turn as a pro came in season 27 where he and Tinashe placed 10th but the pro was continually praised for his original choreography and charm on the dance floor. This is one dynamic duo to watch out for! 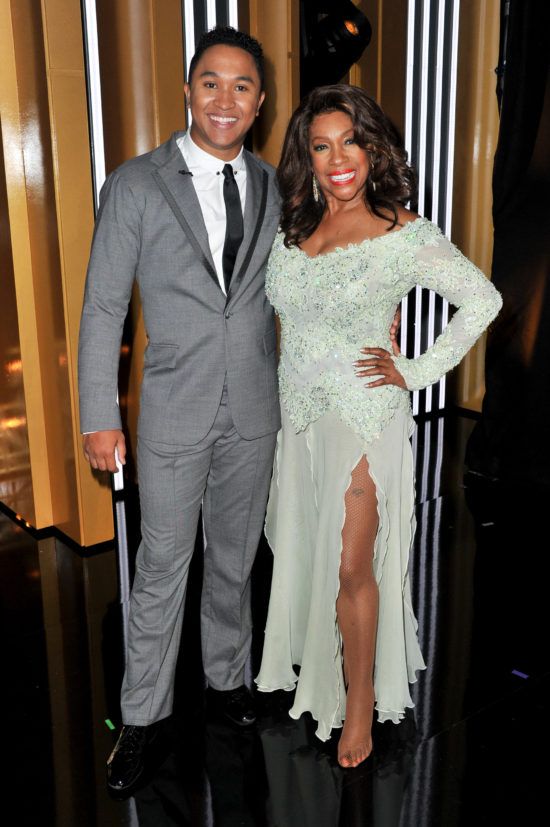 At 6’10” former NBA player and Lamar Odom is partnered with one of the tallest pro women, Peta Murgatroyd. Odom, 39, first rose to fame in the NBA as a member of the Los Angeles Lakers, but found different fame when he married Khloe Kardashian and appeared on Keeping Up with the Kardashians as well as their own series Khloe & Lamar. Of course, in 2015 he went through a health crisis when he nearly died from an overdose and was in a medically induced coma, and is ready to show of his improvement and change in his life. With eleven seasons and two wins under her belt, Peta is the perfect pro to help Lamar turns his height into a strength on the dance floor. 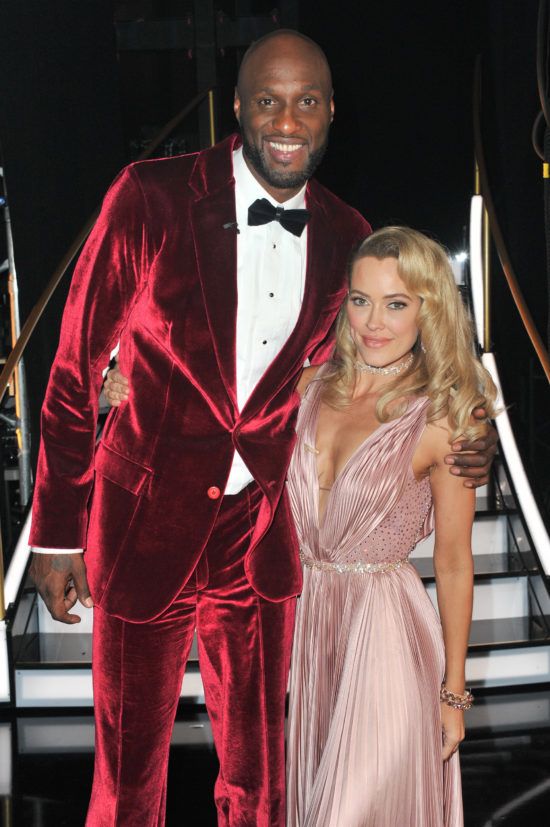 Hannah Brown may not have found love during her turn as the lead of season 15 of The Bachelorette, but she has found someone to dance with in Alan Bersten! While a few Bachelor Nation stars have competed on the show, Brown is only the second Bachelorette ever to be on DWTS after Trista Sutter competed in the very first season. This is only Bersten’s fourth season as a pro but after landing in fourth place the past two seasons, he is ready to crack the top three or even hoist the Mirror Ball Trophy with Hannah B.! 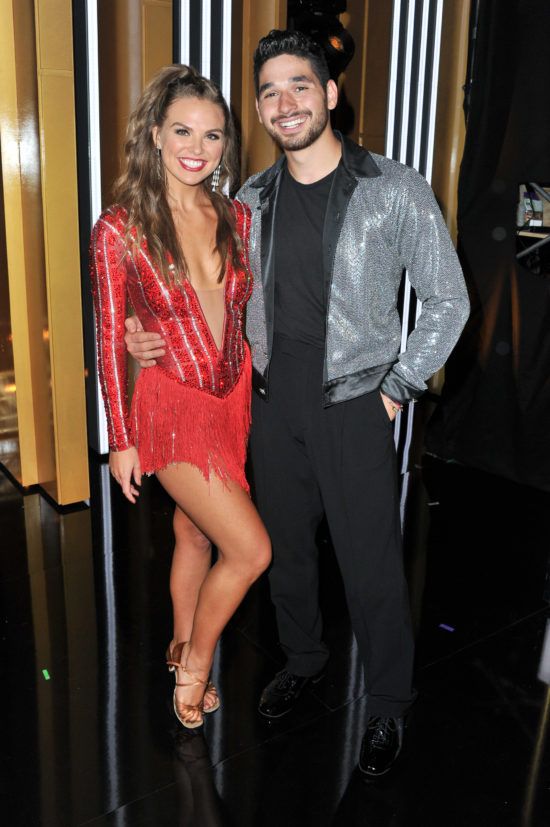 The controversial casting of the season award has already gone to former White House press secretary Sean Spicer. Spicer’s name became well known after he held the role of White House Press Secretary and White House Communications Director under President Donald Trump for only a short time in 2017. One thing is for sure, Spicer already knows how to deal with very heavy criticism, so taking heat from the judges shouldn’t be a problem for the 47-year-old. Luckily he is partnered with fan-favorite pro Lindsay Arnold who is competing in her ninth season, and her last win was in season 25 with Jordan Fisher. 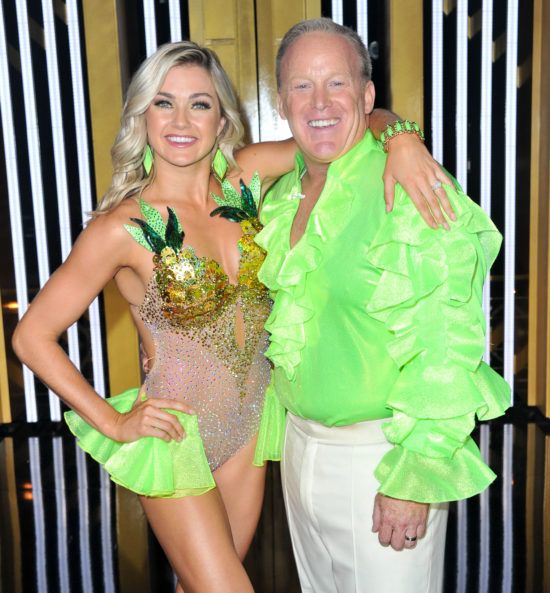 After last season’s big win by country radio host Bobby Bones, country singer Lauren Alaina is ready to take on the challenge! The 24-year old singer was a runner-up on the tenth season of American Idol and has gone on to mainstream success with two albums and a new one on the way. Alaina has been partnered with pro Gleb Savchenko for the season who is competing in his seventh season but has never placed higher than fourth. It seems Alaina might be his lucky charm after the pair landed in the top three on the leaderboard after their first dance. “It was like watching a sultry southern belle,” said judge Bruno Tonioli. 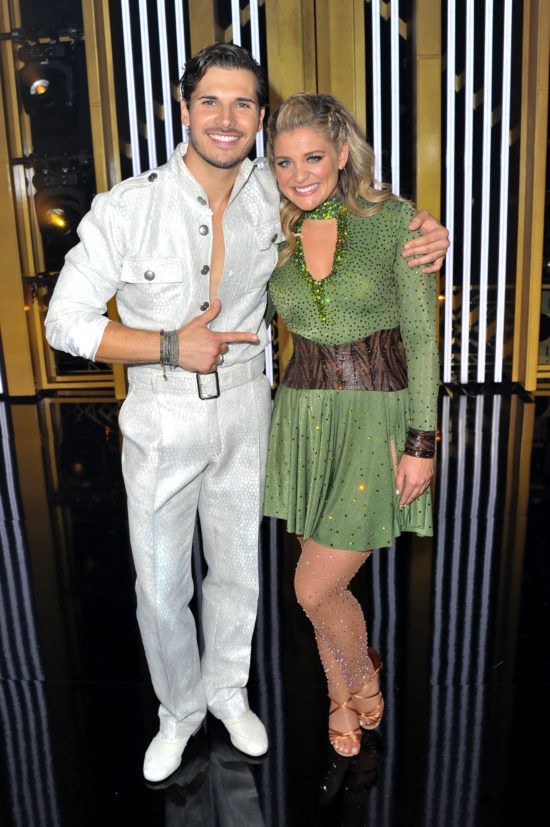 Actor and comedian Kel Mitchell was regarded as one of the toughest competitors heading into the season which means the 41-year-old has a reputation to live up to already. Mitchell has been partnered with Witney Carson, who placed first back in season 19 with actor Alfonso Ribeiro and is itching for a win after coming in 2nd in season 27 with Milo Manheim. “It is very, very good to see your serious side,” said Bruno Tonioli. “You lost your grip a few times … but once you find that, watch out,” added Inaba of the pair’s first dance during the premiere. 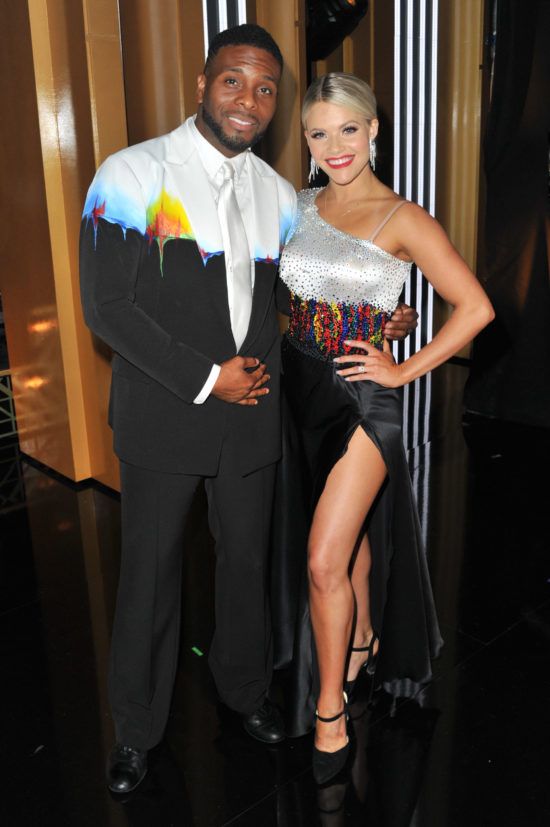 Most know actress Kate Flannery through her role as Meredith Palmer on The Office, and she is hoping that Dancing With the Stars will show her more glamorous side. “I had nine seasons of the most unglamorous character on TV, so we’re going in a different direction,” the 55-year-old said of taking on the challenge of season 28 of DWTS. It will be a new experience for Flannery and her pro partner Pasha Pashkov as this is Pashkov’s very first time as a pro on the series. “I’m so impressed,” said Inaba. “You are sure-footed.” “I’ve got to say your attitude is terrific,” added Goodman. “You come out and sparkle.” 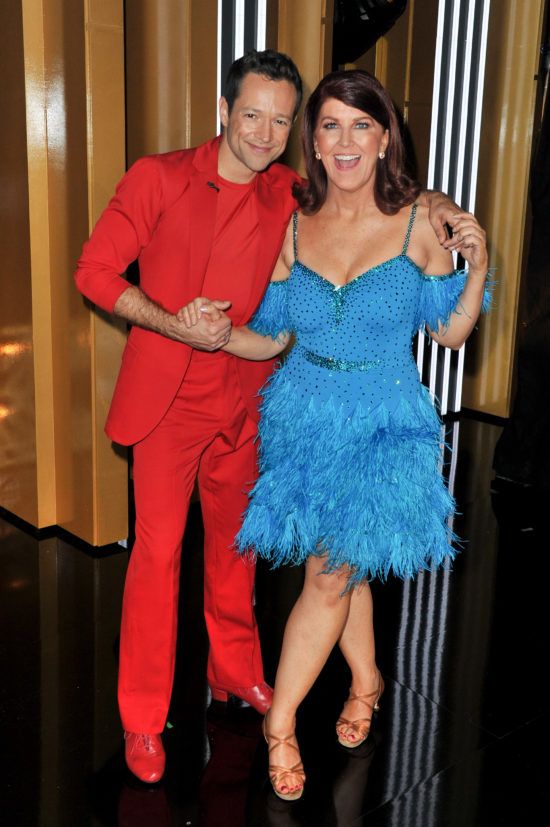 Queer Eye‘s Karamo Brown is ready to show he has style both on and off the dance floor for season 28! The popular star has been partnered with pro Jenna Johnson, who is competing in only her fourth season but already secured a win back in season 26 with skater Adam Rippon. Many are expecting these two to make their way to the top and are definitely a duo to keep your eye on! 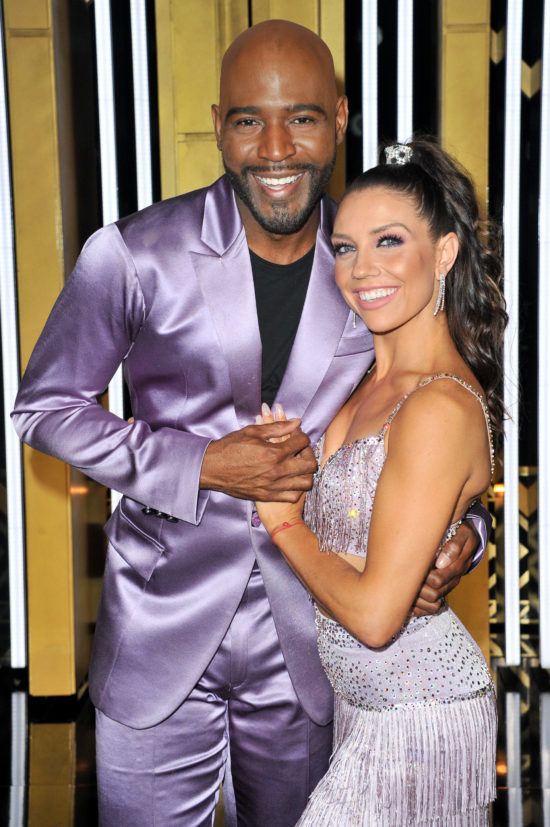 Ally Brooke rose to fame as one member of the popular girl group Fifth Harmony before she embarked on her own solo career. She will try to follow in the footsteps of fellow Fifth Harmony member Normani Kordei who placed third on season 24 of DWTS with her pro partner Val Chmerkovskiy. For her season, Brooke has been paired with Sasha Farber, who is now in his seventh season as a pro and is hoping to place better than third for the first time! While their first dance left a little to be desired, judge Len Goodman did say, “There’s a lot of sort of Beyoncé stuff that I’m no fan of. But you’re a very competent dancer.” 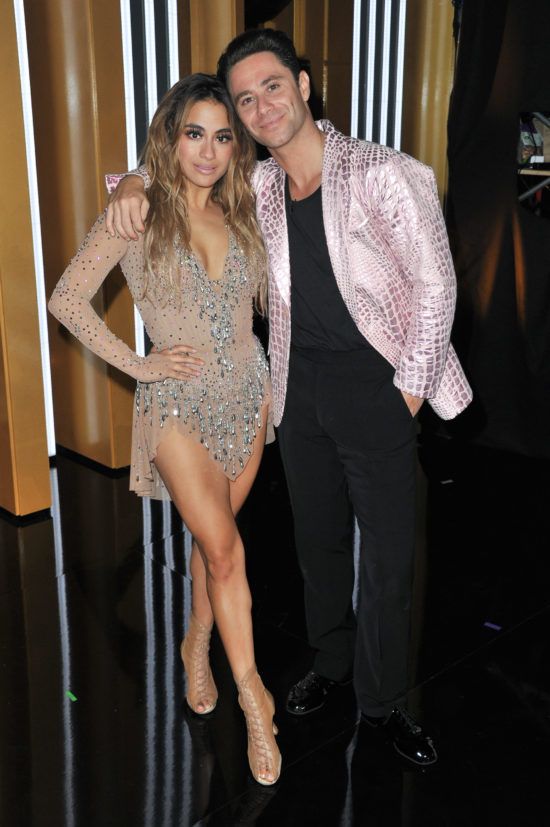 NFL Hall of Famer and controversial football star Ray Lewis is going to be tackling the dance floor this season! The 44-year-old former linebacker played for 17 years as a member of the Baltimore Ravens and is regarded as one of the best to ever play the position, but now only time will tell if his fancy footwork on the grid iron will translate to the ballroom. Fortunately for Lewis, he has been partnered with Cheryl Burke who is competing in her 22nd season! As one of the most seasoned veterans, Burke is known as a top competitor and will push Lewis to perfection, and don’t forget she won with former NFL player Emmitt Smith back in season three. 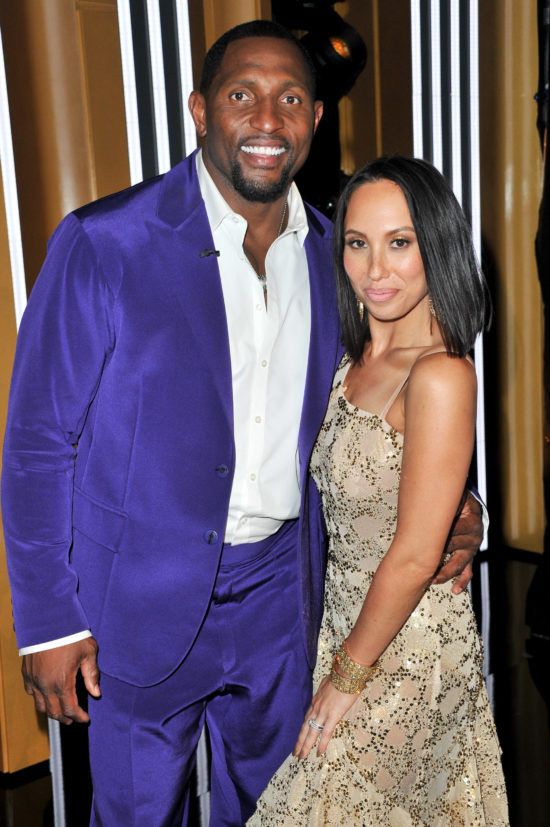 The most interesting duo of the season is most definitely Sailor Brinkley-Cook and Val Chmerkovskiy. Sailor was a very last minute addition to the cast after her mother, iconic supermodel Christie Brinkley, broke her arm in rehearsals and was forced to quit before the premiere. Luckily, Sailor is paired with one of the show’s most talented pros Val Chmerkovskiy, who is competing in his fifteenth season, has won twice, and taught Sailor the first dance in only three days. 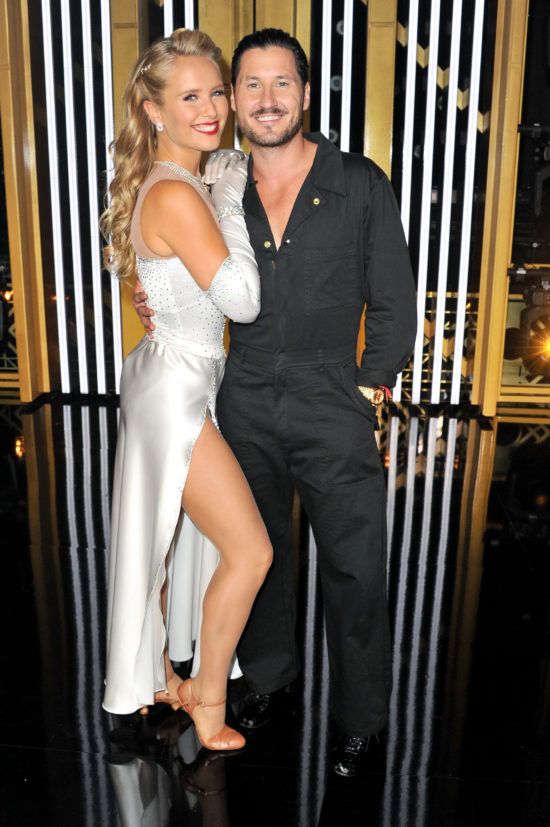 For a certain generation, James Van Der Beek is a man who needs no introduction! The popular actor is best known for his role as Dawson Leery on the iconic teen drama Dawson’s Creek from 1998 to 2003. Now the actor is a husband, and a father to five children, who will surely all be cheering him on! The actor has been partnered with Emma Slater, who won season 24 with Rashad Jennings, and is competing in her eleventh season. The pair are off to a hot start after they ended up with the top score after the premiere. “We have a leading man in the house!” said Inaba. “James, oh James. So strong, so passionate. So charismatic, but what I love is that you were totally in character and in control, all the way through,” said Tonioli. 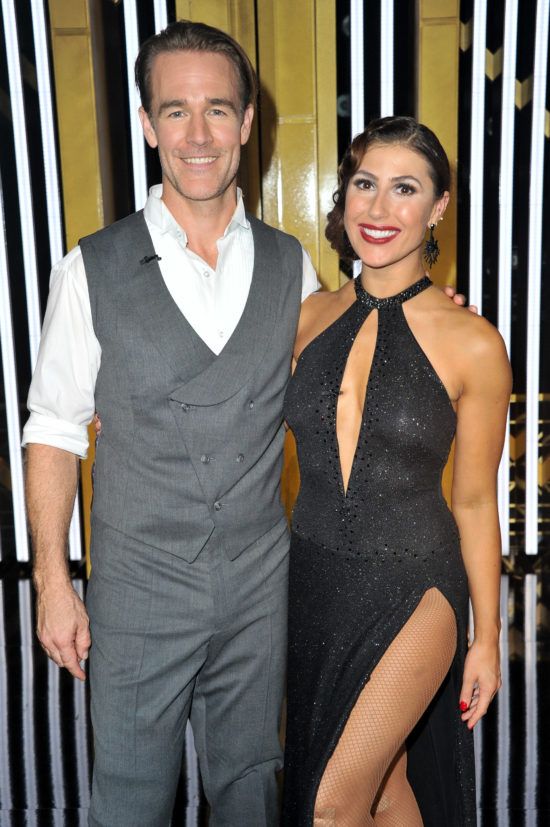 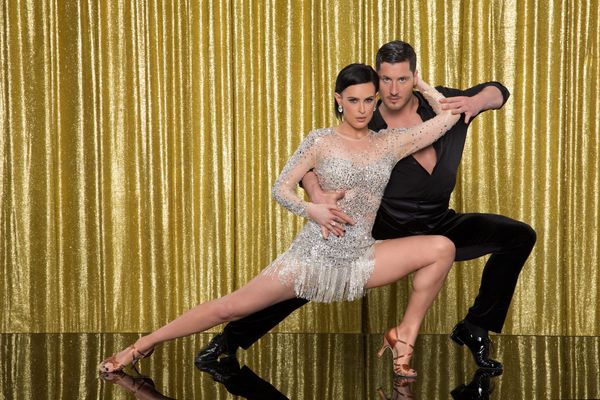