Ross, the Divorce Force. Ross-a-Tron. Mental Geller. Dinosaur Guy. Professor Mc-Nails-His-Students. Ross Geller had his fair share of nicknames on Friends, but whatever you want to call him he’ll be just as funny as always. The paleontologist, single dad, and good friend may mostly be remembered for his rom-com romance with Rachel, but his comedic chops got us laughing in almost every episode of the long-running, still beloved favorite show. Check out 10 of Ross’s funniest quotes on Friends.

Sibling jealously isn’t anything new, but Ross and his sister Monica certainly could take it to epic new levels. Apparently, that started when they were still young as their mom Judy recalled for the entire ganga at Emma’s first birthday party. “I remember your first birthday. Ross was jealous of all the attention we were giving [Monica], he pulled on his testicles so hard we had to take him to the emergency room.” O…M…G. But the laughs don’t stop there. When Rachel discovers the bakery has made a major mistake with the cake – “Oh my God! They put my baby’s face on a penis!” Judy nudges Ross and Monica’s dad, “Jack, look at this.” His response: “I know what you’re thinking Judy…the resemblance is uncanny.” Gah! No! No! No! Ross has a similar reaction. “I am this close to tugging on my testicles again.”

When Ross decides to introduce his partially Jewish son to Hanukah, he feels that he needs a fun character to compete with Santa Claus in order to attract little Ben’s attention. But when Ross shows up in an armadillo costume, it’s more freaky than fun. Scaly, brown, gigantic rodent-like creatures don’t exactly say “Season’s Greetings,” but Ross is fully willing to try. “I’m the holiday armadillo!” Do you think the holiday armadillo comes down the chimney or just scuttles through the back door? Do you think it leaves presents behind or just unfortunately animal piddles? Thanks, holiday armadillo, but we’ll stick with a dradle.

We all go through those rough patches in life when nothing seems to go right and one saving grace is all we need. Luckily for Ross Geller, when he hits a rough patch, his chef sister Monica is on-hand to make him his favorite sandwich. Made from holiday leftovers and a signature “Moist Maker,” also known as a piece of gravy-soaked bread. This is a treat that’s only available once or twice a year and once the turkey runs out, that’s all folks. Unfortunately for Ross, when he takes his sandwich to work and leaves it in the communal kitchen a sticky-fingered co-worker lifts his lunch. “Look, I am 30-years-old, I’m about to be divorced twice and I just got evicted! That sandwich was the only good thing going on in my life! Someone ate the only good thing going on in my life!” Poor Ross. He eventually tracks down the culprit (his boss!) and totally loses it. “My sandwich?! MY SANDWICH?!”

Helping a friend move furniture isn’t exactly the most fun task in the world, but when it’s Chandler and Rachel helping Ross move a couch, it’s absolutely painful for the friends and absolutely hilarious for the audience. Navigating the large sofa up the turning and unaccommodating stairs in Ross’ apartment building is difficult to say the least, but luckily Ross is ready to lead the trio with his super helpful instructions. “Pivot! Pivot! PIVOOOOT!” To which Chandler eventually snaps back, “Shut up! Shut up! SHUT UUUUP!”

How often do New Year’s Resolutions work out? And how often do they go horribly, embarrassingly, hilariously wrong? When it’s the gang from Friends, things can go very, very wrong and that’s awesome for the awkward loving audience. When Ross makes a resolution to try something new every day, one item on the list is to get himself a pair of snazzy leather pants. Opting to wear them out on a date, he gets overheated, takes a breather in the bathroom and lets down his pants for a moment of fresh air and lower limb relief. But, OOPS, the pants have shrunk and Ross is unable to get them back up. Calling Joey on his cell asking for some emergency advice, Joey suggests trying power and lotion to glide the pants back up. It doesn’t work, but it does make things that much worse and oh so funny! “The lotion and the powder have made a paste!”

When you have six young, attractive friends who have known each other for years, it’s not hard to imagine that there may have been a few hook-ups now and then. Chandler’s on-again-off-again girlfriend wonders just that and asks the gang if any of them have ever slept together. The question sparks an episode of wildly fun flashbacks showing instances when various pairs almost slept together. In the mix, is Ross whose flashback involves him first finding out about his then-wife’s orientation. Ross: “I think my marriage might be kind of over.” Phoebe: “Oh, my God, why?” Ross: “Cause Carol’s a lesbian, and I’m not…and apparently it’s not a mix and match situation.” Devastating news for Ross, such a funny delivery for fans of the show.

There’s nothing funny about the necessity of self-defence classes, but there is definitely something funny about Ross’s insistence that he’s a martial arts expert. When Rachel and Phoebe decide to bone up on their defensive skills, Ross assures them that his years of “ka-ra-tay” has taught him what they really need and that is “unagi.” Mistaking the actual “uranagi” with sushi (Rachel: “Isn’t that a kind of sushi?” Ross: “No, it’s a concept.” Phoebe: “Yeah, it is! It is! It’s freshwater eel”), he’s determined to teach his friends a lesson and, of course, ends up getting taught a lesson himself.

3. “When I actually die some people are going to get seriously haunted!” (Season 9, Episode 17)

When a joke between Chandler and Ross gets a little out of control, Chandler ends up posting on their alumni page that Ross is (gulp) dead. But when no one responds, Ross mocks Chandler. “Ha ha! No one cares that I’m dead.” Then he thinks about what he just said and is hit with the depressing realization. “No one cares that I’m dead!” To give people one last chance to properly show their grief – despite the fact that, ya know, Ross ISN’T really dead – he sets up an impromptu wake. But, ouch, no one shows up at first. Ross is more than a little peeved and makes some afterlife revenge plans. “When I actually die some people are going to get seriously haunted!”

Surprise! Baby! Ross is justifiably shocked when Rachel breaks the big news and he’s absolutely flustered. “Yeah, I need uh… I’m just-I don’t know-I don’t understand, umm, how this happened? We-we used a condom.” When Rachel informs him that condoms only work around 97% of the time, Ross is a little less than impressed. In fact, he freaks the frack out! “What? What? What? Well they should put that on the box!” Rachel “ They do!” Ross: “No they don’t!” [Ross runs and grabs a box of condoms.] “Well they should put it in huge black letters!” Rachel: “ Okay Ross come on let’s just forget about the condoms.” Ross: “Oh well, I may as well have!”

One of the most epically romantic episodes of Friends also has one of Ross’s funniest quotes. Ross and Rachel go through a roller coaster of ups and downs when it comes to having feelings for each other, but when Ross finally moves on with new girlfriend, Julie, Rachel tries to do the same and heads out on a first date. Drinking a little too much wine has a lip-loosening effect on Rachel and she ends up calling Ross and letting him know that she’s totally over him. When he gets the message in the morning, he’s shocked to say the least. With Rachel leaping on his back, trying to get the phone away from him before he hears her message, he hilariously, innocently inquires, “You’re over me? When were you…under me?” 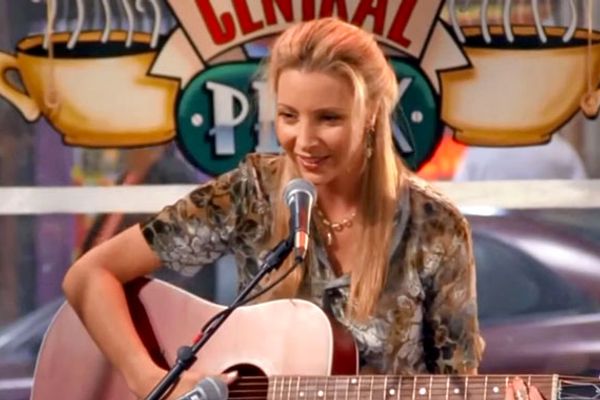