While every single one of the six Friends main cast members (and pretty much every single guest star that appeared on the show) was absolutely hilarious, Phoebe Buffay often took the brunt of the comedic relief and was a side-busting, belly-laugh-inducing expert at it. With her quirky personality and outlandish attitude towards life, not to mention her deep love and loyalty towards her friends and wild sense of personal style, it was hard to resist Phoebe’s charm. Check out 10 of Phoebe’s funniest moments on Friends.

Running with a friend can make the outdoor exercise more fun…or more humiliating depending on who you’re jogging alongside. When Phoebe and Rachel decide to head out on the park paths together, Rachel steps lightly with her calm and controlled style. Phoebe, on the other hand, runs the way she lives. “I’m more free. You know, I run like I did when I was a kid because that’s the only way it’s fun. You know? I’m mean, didn’t you even run so fast you thought your legs were gonna fall off, you know, like when you were running towards the swings or running away from Satan?” Arms flailing, wide strides, and a joyful smile on her face — she certainly makes a convincing argument while making the audience laugh.

When Chandler and Monica attempt to keep their relationship a secret, they don’t do a very good job of it at all. Example: When they begin undressing each other right in front of the giant windows in Monica and Rachel’s apartment. Although it might not have been a big deal if they were indulging in a little exhibitionist action, but the fact that Rachel and Phoebe just happened to be in an apartment across the street and could see everything that was happening was just their bad luck. Phoebe wasn’t too thrilled about it either. “They’re doing it! THEY’RE DOING IIIIT!!!”

Once Phoebe and Rachel know the truth about Monica and Chandler, they decide to have a little fun with their friends. Pretending to know nothing of the secret affair, Phoebe begins to tease, taunt, and flirt with Chandler obviously and blatantly. The awkwardness and hilarity hit peak laughs when Phoebe and Chandler attempt to seduce each other. Phoebe dances for Chandler, shows off her bra, and when she moves in for the kiss, Chandler folds like we all knew he eventually would.

When Ross informs his sister, Monica, and his best friend and groom-to-be, Chandler, that he’ll be playing the bagpipes at their wedding, the pair are rightfully non-too-pleased. Ross doesn’t exactly have the skills to play, especially when he attempts modern pop songs on the ancient sounding instrument, but Phoebe is totally into his uniquely screechy style. Ross’s version of Madonna’s “Celebration” is as horrible as it is hilarious when Phoebe pitches in some lyrics. “EeeeEEEEeeee, eeeEEEeeeeeEEEeeee!”

“Oh, the cow in the meadow goes moo, Oh, the cow in the meadow goes moo. Then the farmer hits him on the head and grinds him up, And that’s how we get hamburgers…” When Phoebe is invited to play a few of her wonderfully unique songs for children at a local library (by a guest starring Chris Isaak), she definitely brings her own style to the cheerful tunes and brutally honest lyrics. Unfortunately, it’s not quite what the library folks are looking for, but for fans of the show, it was classic Phoebe. “Now, Grandma’s a person who everyone likes, She bought you a train and a bright, shiny bike. But lately she hasn’t been coming to dinner, and last time you saw her she looked so much thinner. Now, your mom and your dad said she moved to Peru, But the truth is she died and some day you will too. Lalalala…”

One aspect of Phoebe’s adorably quirky personality is her abundance of confidence. Not hung up on normal insecurities and not afraid to flaunt her assets, while the gang tries to track down the owner of a red sweater that may or may not lead to the identity of the father of the baby Rachel is preggo with, Phoebe’s friends admire her sleuthing skills and she unabashedly agrees with their assessments. “I may play the fool at times but I’m a little more than just a pretty blonde girl with an a$$ that won’t quit.”

Phoebe’s songs may show off her own signature style of ludicrous (and incredible) lyrics, but her unique take on music isn’t merely displayed in her own tunes. While hanging around with her friends in Monica and Rachel’s apartment, the friends debate which is the most romantic song of all time. “’Rachel: The most romantic song ever was The Way We Were.’ Phoebe: ‘ I think the one that Elton John wrote for, um, that guy on Who’s The Boss.’ Rachel: ‘What song was that, Pheebs?’ Phoebe (singing): ‘Hold me close, young Tony Danza.’”

Most of us, when we get a nasty cold, crawl into bed and pull the covers up while willing our bodies to miraculously get better as fast as humanly possible. Phoebe, on the other hand, took full advantage of her sickness by playing up the sultry aspect of her phlegm. Bringing her voice down a tone or two, giving her a gravelly croon, it was perfect for her Central Perk performances. That is, when it wasn’t making her hack up a lung.

When Phoebe and Mike decided to get hitched and tie the knot, she faced a choice every modern bride faces. To change her name or not. Phoebe decides on ‘YES’, but when she finds out that her options are more open than just her birth name or her future hubby’s last name, she gets a little creative in a way that perfectly suit the quirky friend. Phoebe doesn’t want to be a Sarah or Jennifer or even a Phoebe when she can choose to legally be Princess Consuela Banana-Hammock. Mike is less than thrilled and tries to change Phoebe’s mind by deciding to change his own name to Crap Bag, but this doesn’t deter her. But when she finds out that a banana-hammock is in fact another name for a Speedo, she decides that ditching the new name is probably a good idea. 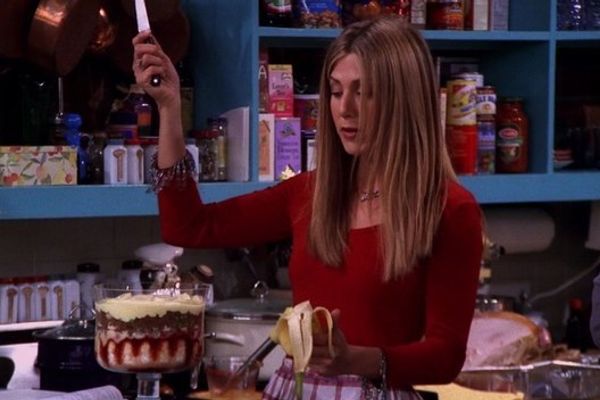