Friends is one of the most popular shows of all time. The sitcom aired for 10 seasons between 1994 and 2004 with an incredible ensemble starring Jennifer Aniston, Matthew Perry, Courteney Cox, Lisa Kudrow, Matt LeBlanc and David Schwimmer. One of the reasons Friends was so successful was because of this incredible cast and the characters they played. Much of the show dealt with these characters navigating through their twenties while living in New York City and a big part of that was their love life. Pretty much all of them went through several relationships throughout the span of the series — some good, some bad. Here’s a look back at 10 of Ross’ love interests ranked from worst to best!

Ross’ ex-wife Carol Willick lands in the worst spot on this list for obvious reasons. She wasn’t exactly a very likable character and didn’t treat Ross very well at all! She cheated on him while they were married, then she married her mistress. Carol was a pretty awful person and, while it sucked for Ross that his marriage fell apart, he was much better off without her! Despite all of this they managed to be cordial and even friends in order to raise their son, Ben.

While Janice is more commonly recognized as one of Chandler’s ex-girlfriends, she also engaged in a brief fling with Ross during season 5! This was during a down time in Ross’ life, hence why he went out with a woman that all his friends despised, and even he despised at one point! Janice is definitely a fan favorite because she brings so much humor to the show, but when it comes to love interests, she’s not exactly first pick. To make matters worse, she was the one who broke up with him!

Cheryl was a fellow palaeontologist that Ross was super excited about dating because she was a “hot palaeontologist” which apparently is very rare! We didn’t get to know too much about her, but what we did learn was enough to write her off completely. She was a closet hoarder! Their dates went great, but when Ross went back to her place he realized she was a messy, unhygienic hoarder. Her apartment was a gigantic mess with critters crawling around, garbage and clothes thrown everywhere. This is the complete opposite of Ross who’s known for being extremely meticulous and very neat.

Emily wasn’t a very likable character on Friends. Her relationship with Ross moved way too fast for viewers to even decide whether they liked them together. They met in the middle of season 4, quickly got engaged and were married by the end of season 4. Ross didn’t exactly treat her very well, but it seemed like with Emily she was always complaining about something. Ross was constantly working to make her feel better about something. Early on it became clear their relationship wasn’t going to work out and we’re not even convinced Ross wanted it to (hence him saying Rachel’s name at the altar)! He tried so hard to please her so that he didn’t have to label himself as “divorced.”

Ross ends up dating one of his students, Elizabeth Stevens, in season 6. Even though she was very nice and sweet, she was also not exactly on his level in many ways, especially maturity, which made him the butt of many jokes among his friends. We don’t have much bad to say about Elizabeth, but she doesn’t rank high up merely because their relationship didn’t last long and it was clear from the get-go she wouldn’t be the woman he ended up with. In an odd twist of events, Rachel ends up dating Elizabeth’s father!

Fellow palaeontologist Charlie Wheeler was the perfect match for Ross on paper, but when we examine her behavior on the show we come to realize she wasn’t actually that great of a person. She cheated on Joey by falling for Ross (granted Joey was also cheating on Charlie when he fell for Rachel), but then she also went on to cheat on Ross with her ex-boyfriend! Even though Charlie should have been a great match for Ross — they had many shared interests, both on the same intellectual level and were attracted to one another — she didn’t seem to know what she wanted!

Even though Mona and Ross dated for quite a while in season 8, they always seemed more like friends than a couple and their relationship was plagued with unfortunate, but hilarious incidents. When they first started dating he found out Rachel was pregnant with his child and then Ross had Rachel move in with him while he was still dating Mona! He continuously forgot about Mona because he was so preoccupied with the fact that he had a baby on the way. In addition to all of this, while Mona was a normal girl, who was pretty, smart and nice, she was also kinda dull! They ended up breaking up after she found out he’d moved Rachel into his apartment without telling her and, to make matters worse, she found out on Valentine’s Day.

Viewers didn’t really get a chance to know Bonnie because she only appeared in three episodes, but from what we saw she was pretty great! Phoebe introduced Ross to Bonnie after his break up with Rachel, so the fact that she was friends with Phoebe is bonus points on its own. She was beautiful and totally out of Ross’ league, but you could tell she was also a little weird deep down. Their relationship ended prematurely because Rachel schemed against them out of jealousy and convinced Bonnie to shave her head. Ross finds out about it all and Rachel confesses she has feelings for Ross which causes him to break up with Bonnie and give Rachel another shot.

Ross comes back from his business trip at the beginning of season two with a new girlfriend, Julie. This tortures Rachel because she’s finally learned the truth about Ross’ feelings about her and in return she’s developed feelings for him. It’s hard to see Rachel break Julie and Ross up because they would have been a great couple and probably would have made it in the long run — they even bought a cat together! Julie was sweet, nice, kind, got along with his friends, but there was just one problem.: She wasn’t Rachel.

It should come as no surprise to anyone that Rachel Green lands in the number one spot on this list. From the very beginning of the series it was clear these two were meant to end up together and even though they were technically only a couple for a short period of time, they served as one of the main relationships on the show throughout all 10 seasons. Ross and Rachel are an odd match on paper, but that’s what makes them so great — opposites attract! They share the same sense of humor, a long, long history that dates back to when they were both in high school and they eventually became tied to one another permanently after having a child together. There’s no doubt in our mind that Ross should’ve ended up with anyone else! 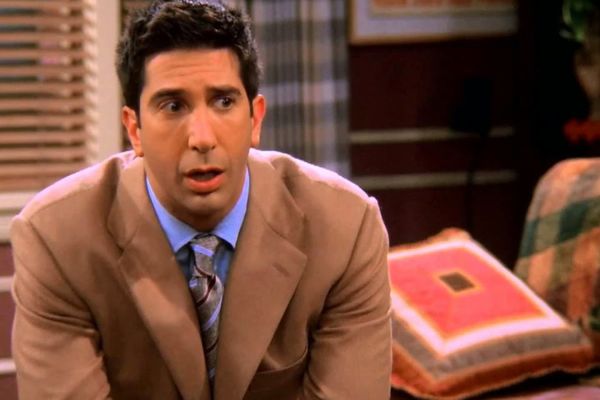