Jenny McCarthy is infamous for her anti-vaccine comments and campaign against scientific medical research (which has resulted in measles outbreaks across North America). We are going to take a look at some of her other, less known controversial comments made throughout her career. Here are Jenny McCarthy’s top 10 most controversial moments:

As a girl from an old-school Catholic family, Jenny McCarthy entered the mainstage with controversy surrounding her Playboy spread. McCarthy was 21-years-old when she posed in a Catholic schoolgirl uniform in an issue for the magazine and she immediately felt the backlash in her Illinois neighborhood after its publication. Luckily for McCarthy, not so luckily for the rest of us, she landed the spot as Playboy’s Playmate of the Year and garnered herself a bit of a resume to enter the Hollywood scene.

Apparently the best way to sell shoes is to include a beautiful woman sitting on the toilet with her panties around her ankles. Why didn’t I think of that? In an infamous series of ads, McCarthy playfully posed on ye ole chamber pot, proving flushing your respectability down the toilet can garner you a decent wage. This must have been a career all-time high.

Just to prove that she hadn’t lost all of her scruples when it came to selecting roles, McCarthy starred in a film that no one saw called Dirty Love. If you have had the misfortune of witnessing a film which invented a new category for horrible movies and earned McCarthy a Razzie Award for Worst Actress, you’d be unable to forget the scene in which McCarthy is featured swimming in a pool of her own menstrual blood. I suppose it’s not a far cry from the toilet ads, but doesn’t she have an agent to occasionally tell her no?

7. Louder Than Words: A Mother’s Journey in Healing Autism

In 2007, McCarthy undertook an enterprise that would alter the course of human history. It began simply enough as a memoir to chronicle a family coping with the difficulties of autism, but it quickly transformed into an attack on medical science. McCarthy blamed vaccinations for her son’s condition, and many other parents desperate for answers, jumped on this wayward speculation. Health experts responded in kind, and attacked the book for lacking evidence to support its claims. This wasn’t enough to hold McCarthy back and she wrote a forward for Andrew Wakefield’s 2011 publication Callous Disregard: Autism and Vaccines—The Truth Behind a Tragedy. Wakefield is notoriously known for publishing fraudulent claims in his 1998 paper linking the MMR vaccine to Autism.

In her pseudoscience crusade against vaccines, McCarthy appeared on Larry King Live to inform the world that vaccines contain mercury, aluminum, ether, and antifreeze. Well, that sounds terrifying, and it certainly had public health consequences with parents refusing to vaccinate their children after that. What McCarthy didn’t tell you, probably because she’s not a scientist, is the ether they specifically cite as an ingredient is not soluble in water and antifreeze is really ethylene glycol, a compound commonly used in protein purification. Additionally, the thimerisol, a preservative containing ethyl mercury is a compound with no physiological ingress to any possible disorder and pharmacokinetics illustrated that it is rapidly removed from the body. Nonetheless the compound was removed from all vaccines in 2001 to counter the mass hysteria that the misleading information caused.

5. Her Response to Criticism

Jenny McCarthy has certainly felt the backlash of her views from the medical community and supporters of science, but she somehow doesn’t seem to recognize her failure to acquire all of the facts. When challenged if her information was scientific or statistical she responded, “Well, I believe that parents’ anecdotal information is science-based information.” Hmm…who’s going to tell her the definition of science? When celebrity culture is the place the average Joe goes for information, it’s terrifying to think that a star is advocating information they deduced from an online chat room. Also note, she begins any statement with “I believe” so as to avoid any type of liability lawsuit. Facts don’t need to be qualified.

In 2008, together with then-boyfriend Jim Carrey, McCarthy released an editorial claiming that her son Evan was in recovery from autism due to his new diet that offset “yeast overgrowth” in his system, which she claimed, was fueling his condition. Jenny said that she was surprised she hadn’t been contacted by CDC or the American Academy of Pediatrics, or any other health authority to understand how Evan recovered, but said her campaign against vaccines may explain why they haven’t knocked on her door. “They don’t want to open that can of worms,” McCarthy claims. McCarthy has clarified her statements that recovery does not mean cure, but these revelations caused many to question the original diagnosis instead believing that he may have Landau-Kleffner syndrome, “a rare childhood neurological disorder that can also result in speech impairment and possible long-term neurological damage.”

3. Her Comments About Charlie Sheen

Continuing to be misinformed, Jenny McCarthy made comments about Sheen’s recent admission that he is HIV positive. She has said that she deserved to know about his condition before playing his off and on again love interest on Two and Half Men between 2007-2011. “I feel like in playing a love interest, you would think there would be some type of, I don’t want to say criminal issue, but I don’t even know how to feel about that.” She added “I have sympathy for him because he’s sick and it’s awful, but man he’s going to have to take major accountability for many people in his life.” Charlie’s lawyer responded to her comments in a statement to People: “Charlie was infected long after he left Two and a Half Men and long after he worked with Jenny.” Shocker.

2. Her Speculations as to Why She Was Fired From The View

Jenny McCarthy made no friends when she claimed she was fired in the name of affirmative action. It was “because [ABC] wanted to make sure the table was diverse. So they consider when Rosie [O’Donnell] was coming back it was too liberal, and they wanted a conservative and they wanted a Latina, so they got Rosie Perez and their Elisabeth [Hasselbeck], if you will, so that way it was a balanced table with more diversity.” Or maybe it was as HollywoodLife.com insider put it: “Jenny McCarthy wasn’t very well liked at all by those working on the show or really anyone at all.” Or maybe because Playboy Playmate and D-list celeb aren’t the right qualifications for gracing the world with political and social commentary.

1. Her Response to Questions

In general, McCarthy doesn’t know how to respond in a way that would make a PR person proud, but her comments in response to how she’d feel if her son was gay, left many in the gay community feeling a little disturbed. McCarthy stated that she “would be so excited” because they could “shop” and he could“ do her hair.” Nothing quite says stereotype like assuming your possibly gay son would suddenly burst with a passion for fashion and hairdressing. Fabulous! 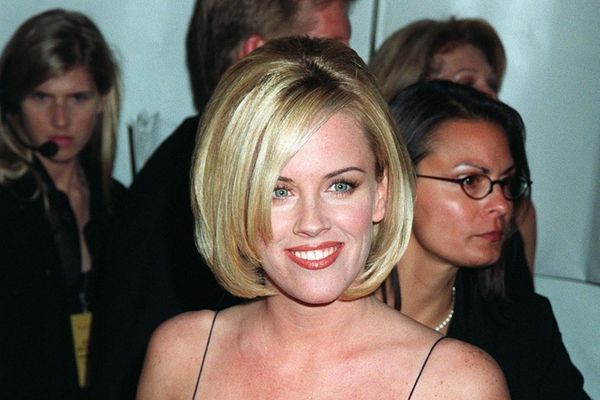