Khloe Kardashian isn’t afraid to tell all – just listen to her recent interview with Howard Stern if you don’t believe us! For her, 2015 was a really eventful year and she gave Stern all the gritty details. Here are the 10 most shocking revelations from her interview:

10. She Never Suspected Him of Cheating

During her marriage to Lamar, there was a good chunk of time that Khloe didn’t know that he was cheating on her. “Lamar was so great at making me feel like I was the only one and I was this princess, so I never speculated about his cheating,” she said.

The Keeping Up with the Kardashians star wasn’t aware of how crafty her NBA player was. “He was so good. Nothing was on his cellphones. He had an assistant, so they were all on his assistant’s phone. He was really crafty. Oh, it’s disgusting! All of these rumors were coming out in the weeklies…and I was like, ‘Where there’s smoke, there’s fire.’ Something has to be right here…I [was] genuinely blown away, like, ‘When did he fit that in?’ I don’t know. It’s a full-time job…It is humiliating on any level, but I found out that he was cheating during the majority of our marriage,” she said.

8. She Got Tested for STDs

When she found out that Lamar had been cheating on her, she asked him if he had used protection and he told her that he didn’t remember, so she had to go out and get tested for STDs. Fortunately, the results came back negative.

7. She and Lamar Had a Great Sex Life

She was especially puzzled about Lamar’s cheating because they had such a good sex life. “Sex, blow jobs, whatever the f–k he wants. Because it’s my husband. I don’t care. Obviously, we had phenomenal sex, that’s for sure. It was just the most intense relationship I’ve ever had – in a great way,” she said.

When asked if she thinks Lamar is a sex addict, Khloe responded with, “Lamar [did] struggle with substance abuse. I do believe there’s a sex addiction, but I also don’t know if I believe in a sex addiction that much.”

In spite of all the cheating, the Kocktails with Khloe star doesn’t regret her and Lamar’s whirlwind romance. “It was just the most intense relationship I’ve ever had in a great way, but looking back in hindsight, would I say ‘oh, yeah probably should you have waited a little bit?’ Sure. But also, I don’t regret doing it.”

Khloe has been plumping her lips, but not in the way you think. “Instead of getting injections, I believe in laser treatments. They will literally plump up your lips,” she said.

3. She Only Dates Black Men

Khloe admits that she has a type – black men. “I have a type. I’ve never been with anybody but a black man…I lost my virginity [to a black man] really, really young. I was like 14 or 15.”

Despite having an enviable body, the super fit star is desperate for one cosmetic enhancement – a boob job. “I want cleavage. I think I will get a boob job for sure, but I can always remove them when I’m older,” she said.

According to Khloe, Bruce lied to the family about him transitioning. They had to find out about it during a meeting with E!. “They mentioned Bruce had a television show about transitioning, and that’s the first we heard of it…We felt betrayed because more business people [knew],” she said. “We felt so, like, what the f–k! We’ve been asking you, and why do [business ] people know? I never want someone to feel like they have a one-up on our family. We’ve never turned our backs on each, with all the cluster f–ks of sh-t in our lives, so why would we now?” 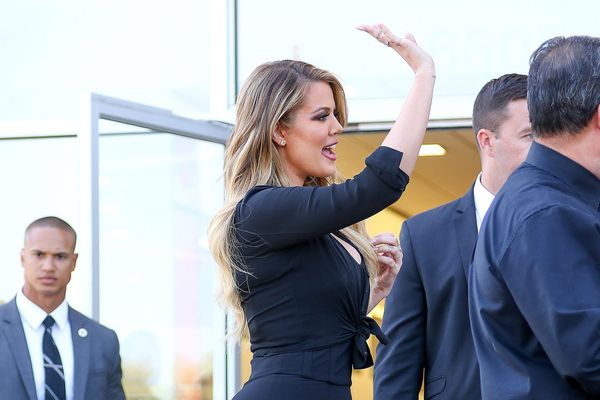