Kylie started off as the adorable and sassy Kardashian, but in an attempt to fill the endless pairs of shoes of her big sisters’, Kylie has made some blunders. This list takes a look at some of her most ridiculous and outrageous quotations to date…although we’re sure the list will only continue to expand.

Before coming clean about her lip injections, Kylie Jenner tried to dupe fans into believing she was just changing with age. In an interview with Grazia in April, she stated: “You guys have watched me grow up since I was 9, my face is going to get different. Now, I know how to do my makeup, contour and everything. I’m not against surgery. I’d never say no, but I don’t desire it right now.” By May though, the cat was out of the bag, and lip injections was just something she wanted to try…

In what can only be described as a horrifically immature moment on social media, Kylie Jenner flung dung after taking a bit of heat laid on by apt The Hunger Games star Amanda Stenberg. Kylie posted a picture on Instagram flaunting some cornrows which got her called out by Stenberg for appropriating black culture but not “using her position to help out black Americans.” Kylie’s corn-filled fecal excuse for a response was: “Mad if I don’t… Mad if I do… Go hang w Jaden or something.” This girl must have the money to pay someone to advise her on the endless “Nos” of this statement. No, Kylie. Just no!

I knew it! This girl hates the limelight and clearly desires a life off the grid. In an interview with Interview magazine, Jenner stated: “When I’m, like, 30, I want to go off the map, have a family and live in Malibu with a farm, and just raise my own chickens.” We hope you do…we really hope you do! When’s her birthday?

7. She Wants to be a Unicorn

Twitter is just coated in ridiculous things said by members of this family; however, one in particular takes the rainbow cake: “Yes, In another world I wish I could have pink hair & blue eyes & covered in sparkles.” Not only does this quotation bring out the Grammar Nazi within, it also inspired many digs by Twitter trolls about her sugar-candy fairytale land. Also, if you check out her recent pics…she has pink hair! Is this another world? Did we switch dimensions?

On an episode of Keeping Up with the Kardashians, a pregnant Kim said that she and Kanye needed a place to stay until their house was completed. When Kim suggested that they stay with Kylie for a while, the youngest sis snapped: “I would seriously stab myself… Nobody is staying at my house.” Ouch! What a great Auntie!

5.When Life Gives You Lemons…

As if life has ever given Kylie lemons! Kylie Jenner has had it pretty easy in her 18 years on this earth…although she may have spent more time elsewhere…but we still have to say that her perceptions and values are a little whack! It turns out, that in Kylie’s mind anyone is able to run a successful business. When asked about her college plans she stated: “I just really want to be a businesswoman… I’m not going to college. I have done everything to prepare for college, so if I wanted to in the future, I could go at any time. But I’m not planning on going anytime soon.” Well…she may prove to be correct. Capitalizing on her belief that makeup (not surgery) can dramatically enhance your features, have led her to creating her own lip line of cosmetics. She also launched her own shoe and handbag line with Steve Madden, a clothing line Kendall + Kylie with Topshop, and her own website. Why bother going to college to learn stuff when you can just pay people to know stuff for you? Not a bad gig…

Kylie Jenner unfortunately reposted a picture on Twitter purporting the “chemicaltrail” conspiracy theory. If you don’t know anything about this “theory,” you can consider yourself lucky…or educated. The theory states that long-lasting trails left by high-flying aircraft are chemical or biological agents deliberately sprayed for sinister purposes…This is why she needs higher education!

3. Being a Grown Up is Serious

Kylie Jenner understands the ins and outs of growing old. At the age of 18, she’s pretty much past her prime. In an interview with Interview magazine, she was asked about what changes she’s undergone as she’s matured. She said: “I feel like, as I get older, I don’t laugh really hard, to the point where you cry… You just don’t find things as funny.” Wow…that’s depressing.

So while Kylie has hailed contouring for the magical transformation of her face, and even though she’s willing to earn a few bucks from her own line of cosmetic products, the youngest member of team-K claims to hate wearing the stuff! In her bizarre spread and interview with Interview magazine, Kylie stated: “…I honestly hate wearing makeup…I feel like I’m way too young to wear such heavy makeup all the time. It’s just bad for your skin, but I’m always doing photo shoots or red carpets and events, so I just obviously want to look good.” Then ditch the makeup and all your tutorials! Like a wise man once said, wearing too much makeup leaves you looking like a lasagna—just layer after layer of one hot mess!

Kylie and Kendall know how to feud it out and in an episode of Keeping Up with the Kardashians, these two Jenner ladies drew their claws. It a battle over ski pants, because that’s the tragic turmoil in their lives, Kendall reported that Kylie said: “I’m gonna grab this knife and stab you multiple times in the throat.” Sounds reasonable… 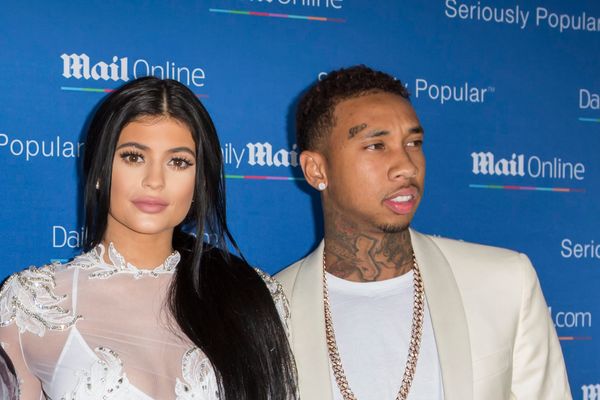