It’s been a sad week for friends, family and fans of Lamar Odom. The former basketball player has been dealing with issues for a while, but things have spiralled out of control over the last couple days. Since he’s been hospitalized, the Kardashian-Jenner klan has been reacting. Kendall, Kris and Rob have all posted heartbreaking messages about Lamar’s condition, which makes the situation seem even more dire. Not all of the developments on this list have been confirmed, but here are the 10 shocking revelations about the former pro basketball player’s condition.

10. He Was Found Unresponsive at the Love Ranch

On Saturday, Lamar checked into the Love Ranch, a brothel outside of Las Vegas. He was there partying with the girls until late Tuesday when he was found in his suite unconscious. The manager of the Love Ranch called for ambulance and told the 911 operator that, when he moved Lamar onto his side, he reportedly saw “mucus-type liquid coming out of his nose and mouth.” Another employee by the name of Misty also called 911 and she claimed that Lamar had blood and white stuff coming out of his nose.

9. He Was Taking Herbal Viagra

Sources at the Love Ranch claim Lamar was seen taking herbal Viagra, which can be a deadly combo when mixed with drugs and alcohol.

8. He Reportedly Lost it on Sunday

Lamar reportedly became distressed on Sunday night when he learned of how he was being portrayed on Keeping Up with the Kardashians. In the episode, Kim chastised Khloe for being flirty with Lamar on the phone and in another clip Lamar called Khloe to let her know that his good friend Jamie had died. Khloe commented in the episode that she was worried that this might push Lamar out of control. In a different clip, Khloe heads to a club because she hears that Lamar is trying to get in. A source said that he remained upset until he was found unconscious.

7. Khloe, Kris and Kim Are at His Side

Since news broke about Lamar’s situation, Khloe has been “inconsolable and heartbroken.” Upon hearing the news, she rushed to the hospital where he is being treated and has not left his side. Kim and Kris are also there. Khloe reportedly flew in Lamar’s two children, Destiny and Lamar Jr., and their mother Liza Morales out to Las Vegas so they could be by his side. It’s being reported that Kim and Kris will be leaving the hospital today but Kourtney is on her way to support her sister.

6. Kobe Bryant Rushed to His Side

5. His Father is Also There

Khloe also reportedly flew in Lamar’s father, Joe, to Las Vegas. According to some eyewitnesses, he and a couple of other people all asked for people to pray for his son.

Family sources have said that Lamar has suffered multiple strokes since arriving at the hospital. It’s unclear at this point if there’s any brain damage.

3. His Organs Are Failing

Sources have reported that Lamar’s organs are failing, including his kidneys and his lungs, and he is currently in a coma. The Kardashians reportedly think that this could be the end for Lamar. “They’re pretty sure this is goodbye, but they’re praying for a miracle,” a source told People. “They know that God has the power to heal him, but that’s really the last hope at this point. This is really bad.”

2. Cocaine and Opiates Were Found in His System

Although it has been claimed that Lamar was only taking herbal Viagra, sources have said that cocaine and opiates were also found in his system. Interestingly, in the 911 recordings, a man is heard telling a dispatcher that the NBA pro had used cocaine on Saturday, but not after that.

1. He and Khloe Are Still Legally Married

According to TMZ, Khloe and Lamar have signed the divorce papers, but the divorce hasn’t come through yet, so they are still legally married. Now she’s responsible for making medical decisions on his behalf because he is in a coma. “He never signed a living will, so Khloe is making decisions for him,” a source said. It’s “very stressful. She is lost.” 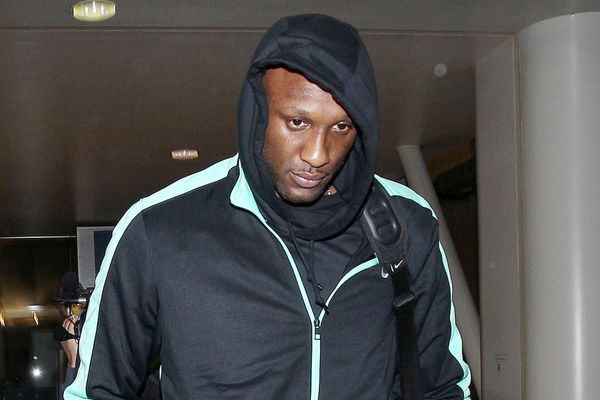