Law & Order: Special Victims Unit is fifth longest running scripted primetime series on television! This show is a spin-off from the original Law & Order, but has since outlasted it predecessor which was cancelled back in 2010. Law & Order: SVU premiered on NBC back in 1999 and will be returning in September for its eighteenth season. Created by Dick Wolf, SVU has been drawing in a big audience for a long time with its intriguing and suspenseful storylines loosely based off real crimes that occurred in the past while featuring the fictional 16th Precinct of the New York City Police Department. The stars of Law & Order: SVU have experienced a huge surge in their career because of the shows success and the majority of the original cast members still remain on the show 17 years later. Here’s a look at how much the main cast of Law & Order: SVU are worth today!

Estimated Net Worth: $4 million. This American actress is best known for her long standing role on Law & Order: SVU as Alexandra Cabot. March has been on and off the show since 2000. With a steady paycheck from NBC, she didn’t have to take on many other roles, but she did do a few in both film and television. She had a co-starring role in Falling for Grace and The Treatment, and held small roles in projects like Head of State, Mr. and Mrs. Smith, The Invention of Lying and Innocence. She took on a series regular role in Conviction as her SVU character, Alexandra Cabot, but that only lasted for one season. In addition to that she has done one episode appearances on 30 Rock, Grey’s Anatomy, Rescue Me, Made in Jersey and Happy Endings. Despite having a rather small resume, March is worth an estimated $4 million.

Estimated Net Worth: $3 million. Pino went from being Detective Scotty Valens on Cold Case to NYPD Detective Nick Amaro on Law & Order: SVU. He doesn’t have an extensive list of credits, but his roles have been notable. He’s held guest starring roles on Men, Women & Dogs, The Shield and Burn Notice. He’s appeared in a few episodes of Chicago P.D. and then of course held two main castings in Cold Case and Law & Order: SVU. Pino joined the cast of SVU back in 2011 and has been with the series ever since. He is rumored to make around $75 thousand per episode! Pino co-starred in Across the Hall and Across the Line: The Exodus of Charlie Wright. He’s also held small roles the films The Burning Plain, Flicka, The Lost City, Rx and Between. He’s currently estimated to be worth around $3 million.

Estimated Net Worth: $8 million. Tamara Tunie has an extensive career both on stage, television, in film and behind the lens! She’s best known for her roles in criminal justice, first as attorney Jessica Griffin on the soap opera As the World Turns and now her current recurring role as medical examiner Melinda Warner on Law & Order: SVU. She’s held small roles in films like Flight, The Devil’s Advocate, Spirit Lost and City Hall, but nothing too notable. She also held a recurring role on NYPD Blue and more recently a main role on The Red Road. Tunie has done one episode appearances on shows like Elementary, Chicago Fire, Sex and the City, Chicago Hope, Days of Our Lives and The Good Wife — just to name a few. Tamara Tunie has been in the biz for a long time and she’s constantly making appearances on shows and has held many notable roles on television. As a result, her net worth is estimated to be a whopping $8 million!

Estimated Net Worth: $8 million. This Tony Award winning actor is best credited for his performance in M. Butterfly and roles on Law & Order: Special Victims Unit as Dr. George Huang, Father Ray Mukada on Oz, Dr. John Lee on Awake and Dr. Henry Wu in the Jurassic Park franchise. Outside of these notable roles, he’s also had notable roles on Mr. Robot, All-American Girl and done one episode appearances on shows like Gotham, The X-Files, Simon & Simon and Century City. He’s held starring roles in feature films like Jurassic World, Jurassic Park, Seven Years in Tibet and Mystery Date, but also smaller projects like White Frog and Slappy and the Stinkers. Wong has done some voice work on Kim Possible and in big films like Mulan II, Mulan and Joe’s Apartment. His well-rounded resume has earned him a respectably high net worth of $8 million!

Estimated Net Worth: $8 million. Kelli Giddish has made a great career for herself on television. She’s held numerous series regular roles and done appearances on popular shows like Damages, Life on Mars and Without a Trace. Giddish is definitely most famous for her long standing role on Law & Order: Special Victims Unit as Detective Amanda Rollins. She’s followed this character over to shows like Chicago Fire and Chicago P.D. Giddish also held a series regular role on All My Children as Diana “Di” Henry, as well as Past Life and Chase. Today, her role as Detective Amanda Rollins makes her the big money. She’s in the same playing field as many of her fellow cast mates with a net worth of $8 million.

Estimated Net Worth: $10 million. This actor and director is well recognized on primetime television for his long standing role as Donald Cragen on Law & Order: Special Victims Unit. He’s been on a total of 337 episodes for the show and makes roughly $100 thousand per episode. He’s done a few small films like Flight of the Intruder, The Flinestones, Getting Even with Dad and Moon Over Parador, but nothing too notable. His main focus is on the small screen where he’s experienced most of his success. Outside of Law & Order: Special Victims Unit, Florek also appeared on the original Law & Order in the same role. Prior to joining the Law & Order family, he held a recurring role on L.A. Law as Dave Meyer. In between these highly coveted roles, he’s appeared on shows like Roseanne, Ellen, Smart Guy, The Secret Diary of Desmond Pfeiffer, The Practice, NYPD Blue and The Pretender — just to name a few. Of course, the majority of his net worth comes from his time on Law & Order which has earned him an estimated $10 million!

Estimated Net Worth: $16 million. This actor, stand-up comedian and author is best known for his street smarts as Detective John Munch on both Homicide: Life on the Street and Law & Order: Special Victims Unit. Belzer has even carried this role over to many other shows like The X-Files, Law & Order, Homicide: The Movie, The Beat, Law & Order: Trial by Jury, The Wire and Arrested Development. Back in the ’80s and ’90s he had a strong film career with many roles in different projects, but he’s since cooled off from that. He has briefly returned, but now as an executive producer! Aside from his regular castings on Homicide: Life on the Street and Law & Order: SVU, he’s also appeared on The Flash for several episodes and did one episode appearances on shows like Unbreakable Kimmy Schmidt, Lois & Clark: The New Adventures of Superman, 3rd Rock from the Sun and various television films. He’s estimated to be worth about $16 million.

Estimated Net Worth: $30 million. Christopher Meloni has been acting since the early ’90s in everything from film to television in comedy, rom-coms and crime thrillers. He’s best recognized for his long standing role on Law & Order: SVU as Detective Elliot Stabler — a role he’s held since 1999. He’s also taken this character over to Law & Order: Trial by Jury and Law & Order. He’s also held notable roles in NYPD Blue, Leaving L.A., Oz, Misery Loves Company, Surviving Jack and a main casting in Wet Hot American Summer: First Day of Camp. When it comes to film he’s held starring roles in big films like They Came Together, Sin City: A Dame to Kill For, I Am Wrath, Wet Hot American Summer, 42, Marauders, Man of Steel and Green Lantern: First Flight. His successful film career and the NBC Law & Order series, Meloni is currently worth an estimated $30 million!

Estimated Net Worth: $40 million. Also known as Tracy Lauren Marrow, Ice-T makes his fortune from being a rapper and actor. In addition to releasing numerous of his own albums, Ice-T is the founder of the record label Rhyme $yndicate Records, co-founder of the band Body Count, and for the past 16 years he’s held the role of NYPD Detective Odafin Tutuola on Law & Order: Special Victims Unit. He and his wife Coco have their own reality show called Ice & Coco and he’s grown to become somewhat of a well known television personality and host. When it comes to acting, he was a main cast member on the show Players, he’s held starring roles in films like Tank Girl, Johnny Mnemonic, Ticker, 3000 Miles to Graceland, Final Voyage, The Wrecking Crew, New Jack City and The Heist and he’s worked behind the camera as an executive producer and director on documentaries and small films. Ice-T has his hands in various projects and he’s been extremely successful with his work. He ranks it as the second highest earner on this list with a net worth of $40 million!

Estimated Net Worth: $45 million. Mariska Hargitay is the face of Law & Order: Special Victims Unit. The show wouldn’t be what it is without her. She has been with the series since 1999 and even crossed over to Law & Order more than once. As the star of the show she’s rumored to make around $400 thousand per episode! Hargitay has even worked behind the lens as a director on four episodes and producer in seasons 16 and 17. She’s appeared in few films, mostly at the beginning of her career before she became Olivia Benson! Her only main role has been on Law & Order: SVU, but she’s also had notable roles on shows like ER, Can’t Hurry Love, Tequila and Bonetti, Falcon Crest and Downtown. She took her role as Olivia Benson over to Chicago P.D. and Chicago Fire for a few episodes and has appeared on countless other shows. Mariska Hargitay is at the peak of her success with the biggest net worth on this list, a whopping $45 million! 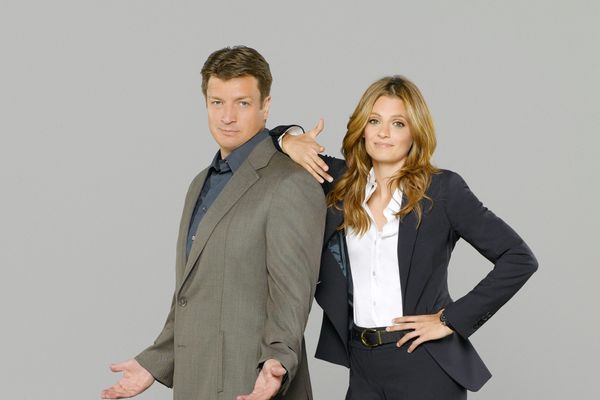 Cast Of Castle: How Much Are They Worth Now?